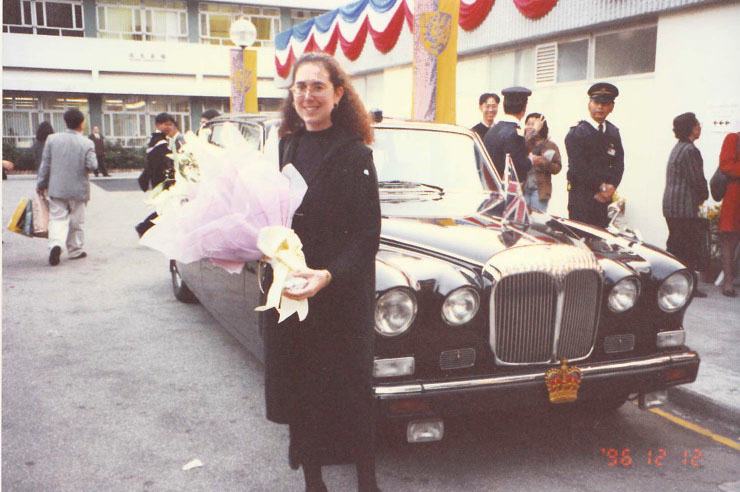 It wasn’t like I hadn’t grown up in a feminist household. My mom and her only sister had gone to Smith. My dad was a stay-at-home dad when he wasn’t teaching. So gender roles were never really something I thought about growing up. My mom was a CPA; my dad a university professor. My mom earned more than my dad and worked later hours during tax season.

In middle school, I started learning about China. My dad’s Chinese students were all women married to men who followed their wives from China to the US. The husbands took care of the children while the wives went to class and worked in labs. (I only knew one American family with a stay-at-home dad.) I thought China had solved the issue of gender equality. When my high school planned its first trip to China, I used all my babysitting money to pay for it. The year was 1988.

Then I moved to Hong Kong two years later.

My first year passed quickly, so much so that I wasn’t ready to move back to the US. I had to finish college, though. A few years later I moved back to Hong Kong for grad school.

Months before the start of the first semester, I tutored and met Maria, a young local woman who wanted to practice conversational English. Our classes took place shopping in Tsim Sha Tsui and over steamers of dumplings at Saturday dim sum.

Maria and I planned to travel to South Africa the following summer, but I got married instead and regretfully told her I couldn’t go. I learned more from Maria than she did from me. I’d known that men in Hong Kong could have more than one wife up until 1971. This happened in Maria’s family. Her mom had passed away years earlier from ovarian cancer. She and Maria’s father had six daughters, but no sons. So in the 1960s, Maria’s dad took another wife to give him a son.

I know it was a cultural difference and one the British condoned until 1971, but it still made me angry and sad. How would Maria’s life and that of her sisters and mother have turned out if her father hadn’t been so determined to have a son? Things like this happen in the US, I know, but it pissed me off that it was institutionally all right until a year after I was born.

Second semester in grad school, a teacher I liked and felt close to told my graduate class that we female students should not continue on for our PhDs because we’d never find a husband. Bullshit, I wanted to shout. But I kept my mouth shut. This professor had been in a WWAM marriage with an American woman in California in the 80s. It didn’t last, but surely he knew that men and women can both succeed academically.

So I walked back to my dorm, where my husband (I was newly married at the time) was studying and told him about the craziness this professor had spouted.

Some classmates and other female graduate students from China told me they’d never get married because 1) they were pursuing graduate degrees and 2) they were too old (in their late 20s or early 30s).

Surely they could find a man who wouldn’t be threatened by their education and still-youthful age. Leftover women is still a problem in China and even Hong Kong. And it’s not unheard of in the US, if we’re to be honest. I just hadn’t thought of or heard of this before going to grad school in Hong Kong.

I met my then-husband in Hong Kong. His parents from the mainland visited us for a few weeks in Hong Kong after we’d finished graduate school and were working at local universities. Then soon after we moved to San Francisco, my former in-laws would move in with us for a year.

When I came home from work one evening, I told my mother-in-law that my boss was pregnant.

“What’s she going to have?” my mother-in-law asked.

My son Jake was a baby at that point and that’s why my in-laws had moved in with us. My mother-in-law had one son and three daughters, all of whom were very close with her.

Yet my mother-in-law still said, “Too bad.”

I sat there, stunned. Then I tried to explain that in America expectant parents only hope for a healthy baby, but deep down I know that’s not always true.

Gender roles in the US are no better than in China or Hong Kong, but I came of age in Hong Kong and that’s where I first realized the imbalance. I would probably have come to the same conclusions if I’d instead stayed in the US throughout my twenties. We all have different experiences and this happens to be mine.

So I’ll always credit Hong Kong for showing me why it’s so important to support other women. They may have lost a mother to cancer; they might not have married and have a graduate degree or are above the age of 26; they may have a daughter; they may have been in abusive relationships; or perhaps they’ve been divorced. Or maybe I know nothing about their personal lives. But I do know the most important thing we need is the support of other women.

If we don’t have each other, who do we have?