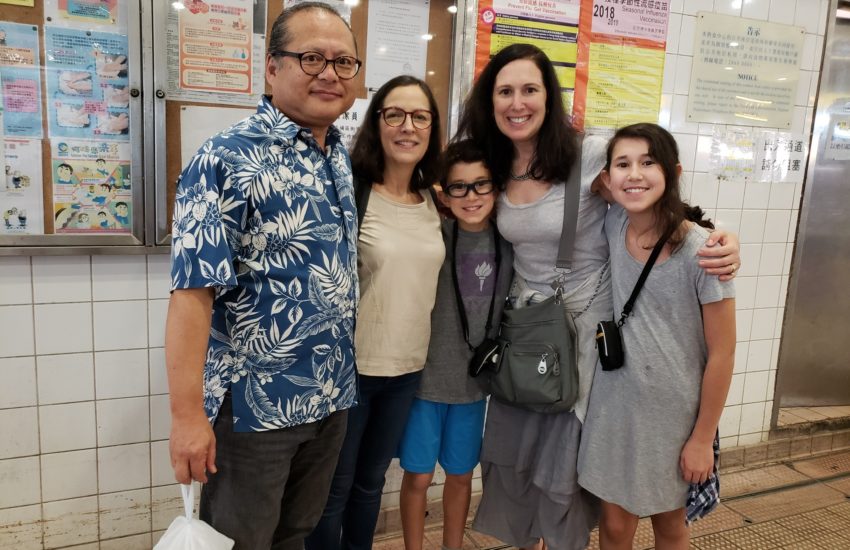 Four years ago Heather Diamond e-mailed me through my website. She was getting ready to move from Honolulu to Hong Kong and was in the middle of writing her memoir, Rabbit in the Moon. I was immediately drawn to her story because in so many ways it resembled mine, although with different outcomes. Her husband teaches in the same department where my ex-husband studied for his doctorate. The similarities are uncanny.

Heather and I started a great e-mail correspondence and since I was traveling to Hong Kong once a year before the pandemic, we made plans to meet up in person the next time I was in town. I had my two younger kids in tow on that trip and Heather was completely up for hanging out with us. She and I carefully planned our afternoon: meeting at the university before lunch and the train museum in Taipo, the town just north of campus. I also mentioned in an e-mail that my kids were interested in seeing the China border.

When Heather and I finally met at the University train station, it was like we’d known each other for years. I’d read drafts of her memoir and felt we were kindred spirits.She was a vegetarian when she first went to Hong Kong; I don’t eat pork. On an early trip to Hong Kong before she moved there, her weekend away with her husband in Macau turned into a group outing with more than a dozen of his family members; I took trips to the Hubei countryside with my former husband’s family of eight.

We boarded a university bus with my kids and wound our way around the mountain on which the campus is situated. Heather pointed out buildings I’d forgotten and new ones since I’d graduated in the mid-1990s. When we reached the top of the mountain, it was time to head back to the station to meet Heather’s husband, Fred, for lunch in Taipo.

Taipo was one of the first places off-campus I got to know back in 1990 when I moved to Hong Kong, so it was lovely spending the early afternoon with Heather and Fred at a food court there. My kids were so impressed that we could place bones and gristle on the table without worry. A stroll through Taipo Market and a visit to the train museum were also great fun. Fred returned to campus while Heather, the kids, and I traveled on to the China border at Lok Ma Chau.

There were two options for riding the train up to the border: Lowu or Lok Ma Chau. When I lived in Hong Kong, Lowu was the only border station by train. Since then, a new station had opened at Lok Ma Chau, a sleepy area my study abroad program had taken us students by coach bus to “see China” in 1990. So I thought it would be fun to observe the changes there and let my kids “see China” for themselves. We didn’t have China visas, nor did Heather then, so it would just be a quick trip to the end of the line.

Heather and I chatted on the ride north and soon enough we arrived at the terminus, Lok Ma Chau. I was blown away by the skyscrapers lining the horizon that had been paddy fields in 1990. I kept telling Heather how much it had changed, how little I recognized it, and how disoriented I felt.

After taking some photos, we decided it was time to board the train back into town. I was due to meet a couple friends, including our mutual friend, the author Claire Chao, and Heather would be attending Fred’s concert that evening. It was time to head back.

But it seemed like all passengers exiting the train were heading to customs and immigration. That’s not what we wanted. Wasn’t there a way to pass through a turn-style and then re-enter to for the train heading back toward town? We were supposed to send our tickets through a machine to charge us for the inbound fare and then re-send it to start the outgoing fare. I’d left my Octopus card back at our hostel, so only had a one-way fare to Lok Ma Chau. If I couldn’t buy another ticket to Central, almost two hours south, how would that work?

We found an escalator, but found nowhere to go apart from customs and immigration. So we went back to the platform and figured we’d just board an outbound train and cross that ticket fare bridge when we got there.

Yet there was no sign of a train. Our watches seemed to move at lightning speed as the tracks remained empty. Now we would both be late for our next meetings. I may have had WiFi at Lok Ma Chau station, but had no way to update my friends on our tardinessand when we could expect to reach Central. Back when I lived in Hong Kong, I had a terrible habit of underestimating the time it would take me to get from the university to Hong Kong Island and was always notoriously 45 minutes late when meeting friends (this was before cell phones). At Lok Ma Chau, thoughts of déjà vu flashed through my mind. Fortunately Heather and Claire are close friends and Heather sent a message to Claire once we finally boarded a train. We must have waited more than 30 minutes for one to arrive.

With a quick good-bye at University station, the kids and I thanked Heather for the lovely day. I would see her a few days later at a book event, but we wouldn’t have otherwise had that much time to spend together if we’d just relied on seeing each other at the bookstore that Saturday.

Apart from an overnight layover in 2019, that trip when we got stuck at Lok Ma Chau was the last I’ve made to Hong Kong. I’m so excited about Rabbit in the Moon and especially love the way Heather writes about Hong Kong and the story of how she arrived there. May we all be able to enjoy the city through her beautiful pages.