With the recent Brett Kavanaugh hearings and confirmation, women around the world have looked on aghast, wondering how an entitled frat boy could aspire — and gain admittance — to the highest court in the US. What surprised me personally about the hearings was how I immediately went back in time 30 years to high school. And it was terrifying.

In high school, I was quiet and aloof, never going to school dances or outside cotillions. I was never invited to parties or went to homecoming. I was terrified. Boys like Kavanaugh’s yearbook persona were idolized in movies like Risky Business, Sixteen Candles, The Breakfast Club, and Revenge of the Nerds. I loved all these films, as did most American teens back then. But the message was super scary. If girls didn’t watch out, they’d fall victim to coercion or assault–or both. It was also a confusing time because girls were taught it wasn’t cool to be a virgin, but it also wasn’t cool to have many partners. For me, it was easiest to just not date.

When I first moved to Hong Kong the year I turned 20, I thought I was home free. Surely the men there weren’t like the frat boys I felt so intimidated by in high school and college. Surely the men in Hong Kong were more respectful of women and didn’t want to bring shame to their families.

That first year in Hong Kong, I have to say that perception rang pretty true. But I didn’t really know many men there and the ones I talked to the most were American-Born Chinese exchange students in my program. They were lovely, but they were American. So that didn’t prove my thesis.

Fast forward a few years to when I moved back to Hong Kong for grad school. I was in a dorm filled with students from mainland China along with a smattering of Europeans, Africans, and North Americans. I thought it was very welcoming of the mainland students to include me in their outings to the racetrack and a seaside village a couple hours from our campus.

I learned quickly that while Hong Kong and China may not have frat boy types who don’t care what their families think of their misogynistic behavior, coercion and assault are as rampant there as it is in the US. Maybe more.

A married mainland Chinese graduate student knocked on my door one evening and sweet talked his way into my room. He convinced me to go to his room to show me his Chinese masks from Sichuan province. You can imagine what he tried after that. I figured he was just being friendly and that he would never prey on me when he was married to a wife back in China (with a son there, too). Joke’s on me. 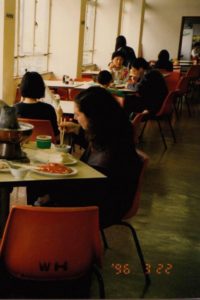 I went out with a single overseas Chinese man whose family went back five generations in Hong Kong. On our first and only date, he grabbed my arm while we were drinking in a British pub and squeezed it so hard I thought he was going to shatter it into a thousand pieces. My arm bruised up for a couple weeks.

Then there was a Hong Kong acquaintance who compulsively lied his way into a friendship with me and assaulted me in a Hong Kong hotel room.

You can’t say these men didn’t know the rules and were exempt because of cultural differences. They knew exactly what they were doing.

What’s more, these men also bored me to tears with stories about their families. It took almost as much strength to fend them off as it did to pretend I cared about their boring domestic woes. I recently read Stormy Daniels’ riveting memoir and she also writes about how Donald Trump went on and on about his family at the same time he was coercing her.

What’s with these men bringing in their families while they’re embracing their misogyny? It’s such a bizarre combination.

Have you had a similar experience?