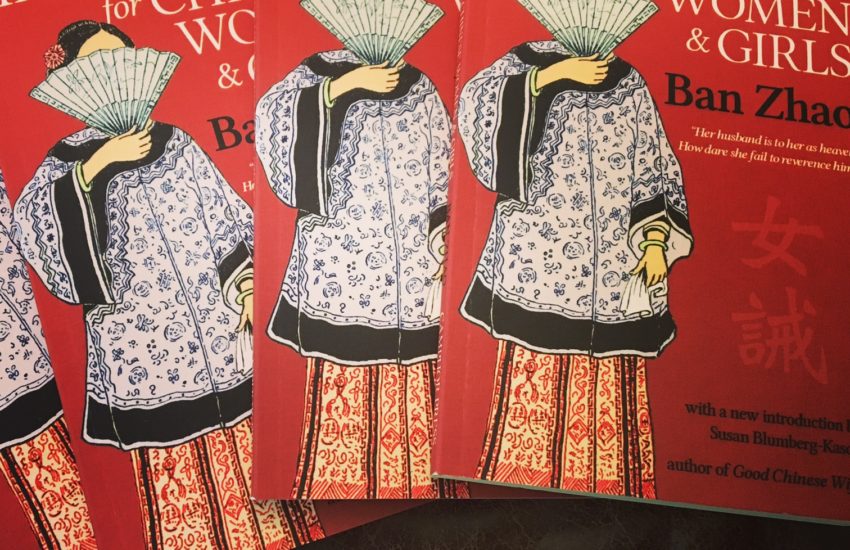 When I was writing my memoir, Good Chinese Wife, my agent asked me to find some tongue-in-cheek quotes to add a little oomph to the manuscript. We were thinking about quotes like Mao’s ‘women hold up half the sky‘  to go with particular scenes when the emotional abuse in that marriage was at a particular low. Carrie thought these quotes could show that life is still difficult for women.

Then one night I came across Ban Zhao’s ancient text, Instructions for Chinese Women and Girls, and felt like I’d just won the lottery. Her lessons were perfect for my book!

It seemed like her instructions pertained to everything that went wrong in that marriage: in-law struggles, an unemployed husband, a sulky husband, guests who appeared at our house unannounced when our child was a week old. The list goes on, but Ban Zhao’s lessons seemed to cover all my issues.

“When your mother-in-law sits, you should respectfully stand.”

That wasn’t too difficult. I would return from work around 6 or 6:30pm during the week and my mother-in-law would be sitting down, feeding Baby Jake. I’d stand and heat up my dinner. Then I’d spend the rest of the evening trying to rock Jake to sleep while my mother-in-law parked herself on the sofa, watching nightly soap operas broadcast from China. I didn’t blame her. She worked hard taking care of Jake during the day. But I also worked hard supporting our family of five (in-laws, husband, Jake et moi).

When the husband goes out, the wife should respectfully ask how far.”

That gets old after your husband continually leaves home after dinner and doesn’t return until 2 or 3 in the morning. Yes, he wasn’t working and needed adult conversation, but did he need to go out most nights a week and most weekends?

“At the cock’s crowing time arise, and dress yourself with care.”

That I did, but only because I was the only adult in the house with a job. I had to get up early to get to work on time so I could return home before the husband went out with his friends.

“Invite your guests to enter: present your salutations, inquiring after their welfare since you last met.”

Can you honestly see doing that after 12 hours of labor and a week of sleepless nights that you knew would continue for the next few months (it lasted longer than that)?

I ended up using half a dozen Ban Zhao quotes in my section breaks. My agent and I were super excited about these quotes and thought they fit naturally with my manuscript.

About 18 months after my book came out, the publishers at Camphor Press asked me to write an introduction for their reprint of Instructions for Chinese Women and Girls. Since the book came out 1500 years ago, it’s in the public domain and there’s no need to ask the publisher for rights to reprint it. Not that that would be possible.

It was so much fun learning about Ban Zhao and her early 20th century translator. Ban Zhao was China’s first female historian and lived a good 500 years before Confucius. Esther Jerman was an American Christian missionary who lived in China for almost two decades and was very sympathetic to the Chinese. Both Ban Zhao and Jerman were women scholars ahead of their time and both died at the age of 70.

So to celebrate the publication of the paperback reprint of Instructions for Chinese Women and Girls with my introduction, I’m excited to give away five copies of this book. It’s a small book with illustrations and doesn’t take long to read.

To enter the giveaway, just leave a comment with a modern lesson for women and girls, and I’ll pick the five most creative ones. If there are more than five, I’ll pull names from a hat (with my grade school kids looking on as witnesses).

Entries must be received by Wednesday, July 12. Good luck and enjoy!