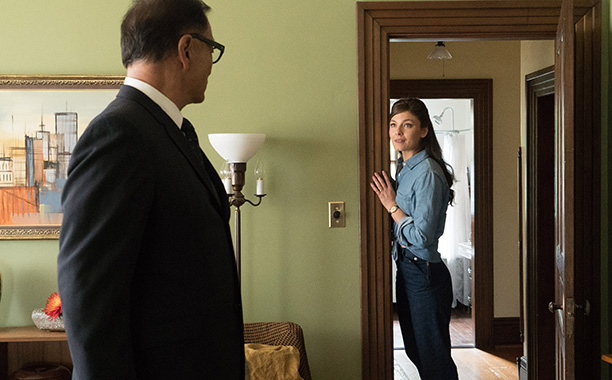 When I started watching, I never once expected any positive AMWF relationship depictions in The Man in the High Castle. For those who don’t know the summary of the plot line, I will provide a spoiler-free one below.

The Man in the High Castle is a show about what would happen if the Axis Powers won WWII. The show is primarily about Julianna Crane, a woman who grew up in Japanese Empire’s San Francisco. She eventually gets involved with the Resistance against the Japanese and Nazis who control most of the North American continent. While working with the Resistance, Juliana discovers a film about the Allies winning the war. This inspires her to fight and stay alive.

NOTE: I am going to try to write about this without too many spoilers because discovering this WWAM couple is a spoiler. If you want to read on, go ahead. Unfortunately I cannot get many screenshots from the show.

It’s the mid-1960s. Nobuske Tagomi, the Trade Minister of the Japanese Empire in San Francisco grows tired of the world he helped create. He begins to meditate and somehow enters an alternate universe where the Allies won WWII. (Possibly our universe.)

Upon returning home, he discovers his son and wife are alive in this alternate reality. His wife is in the process of divorcing him due to feeling constantly abandoned. His son is estranged from him, but he also finds that Juliana Crane is his daughter-in-law and has an unnamed child in this alternate reality. Juliana Crane previously worked with Tagomi in the Japanese Occupied San Francisco universe, thus he is surprised to see her as a part of his family. Tagomi’s son, Noriyuki, is untrusting of Tagomi due to his constant absence. Juliana, however, is trying to be the bridge between Noriyuki and Tagomi.

Upon watching this, I feel that this representation of this WWAM couple is important because it is a show that takes place during the 1960s. In “our” world, Tagomi sees the love Juliana has brought to his family, and is trying to help heal the bonds between the family. Furthermore, a WWAM couple in the 1960s is a rarity, especially shown in a show like this.

If you are interested in anything related to WWII and the “What If” plots, I recommend watching The Man in the High Castle.