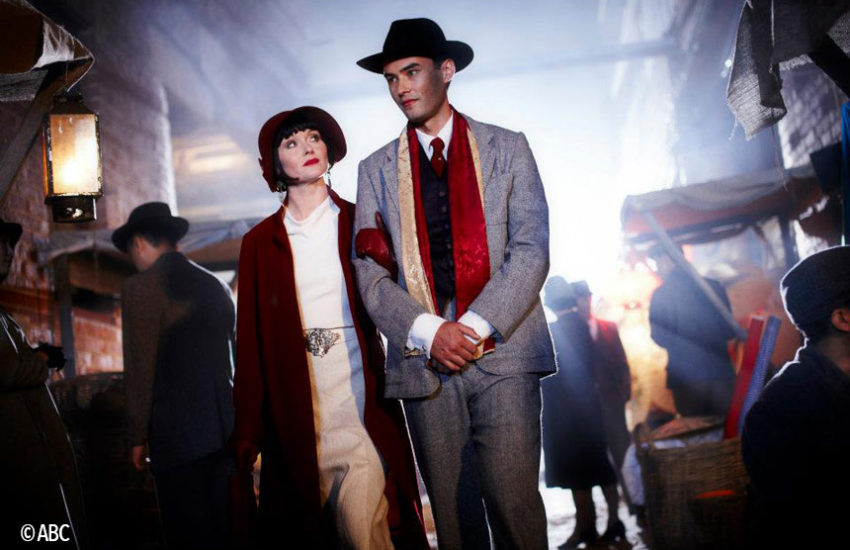 Murder mysteries. The Roaring 20s. Australia. A WWAM affair. The list of reasons why you should really be watching Miss Fisher’s Murder Mysteries is about as long as my arm. The plucky and glamorous Miss Fisher, unmarried in her late 30s, is anything but an “old maid”. Wreaking havoc in Melbourne’s police office in glamorous outfits and with a continental approach to life, the show includes many references to social expectations and gender roles of the 1920s in a humorous, yet earnest manner.

That being said, I was still swept off my feet when it turned out that Miss Fisher, who takes lovers from any country that tickles her fancy, counts a handsome Chinese among those notches on her bedpost. Lin Chung (played by multiracial Philippe Day a.k.a Sung) is from a well-to-do family with impeccable English, impeccable manners and an impeccable dress style. I was even more surprised that uncharacteristically, Lin reappeared in a second episode. This has so far been fairly unusual, as it’s mostly been Wham Bam, Thank You Man for the illustrious Ms. Fisher.

The first episode ended in a slightly disappointing manner, with Lin set to return to China to enter an arranged marriage he was not keen on, as the future in-laws had ties to opium, of which he was not a fan. His fiancé, it was hinted, was a headstrong young woman, clashing already with her future Mother-in-Law.

The whole story arch was fascinating, as it showed a strong Chinese man with moral integrity, who decides to work within the framework of arranged marriage he has been given to fight the corruption of opium from within, once he has married into the family. The mother-daughter-in-law relationship again is a very common source of conflict in China, as was, at the time the opium trade. Therefore, I want to commend the writers of this story arch for showing a deeper understanding of the goings-on in China’s society at that time and coming up with a story that also has a remarkable Asian male character.

In the second episode that Lin appears in, again, we are reminded that Phryne Fisher just doesn’t do things by the book. His engagement has been on the rocks anyway due to his future wife having been divorced, a fact Lin’s Mother cannot accept as it constitutes such a loss of face. As Lin offers to break off the engagement because he loves Phryne, she tells him she can never commit like that to a man – a bittersweet moment, as I was cheering for my henceforth favourite WWAM couple, but also impressed that it was her as the woman who didn’t want the committed relationship.

Throughout the episode it transpires that Camilla, Lin’s fiancée, is actually also a secret communist. Another reason for the MIL to be against the match. However, after Phryne tells Lin he must go ahead with the plan to marry Camilla, and becomes quite a substantial advocate of the young, English-speaking Communist revolutionary, Lin finally stands up to his mother and tells her he is taking over his duty as man of the household and as such she will respect his choice of wife. Yet again, we get an interesting glimpse into what is going on in faraway China at the time, where political fractions and feudal families are battling for the upper hand. We also meet a woman Phryne admires – and therefore we as viewers do too. Yet, she happens to be a Communist. I don’t know about yourself, but I’m hard-pressed to remember any Western TV shows or movies making me want to cheer for the Communist side.

The show has done a very good job at taking aspects of Chinese culture and history that can easily portrayed in a cynical or stereotypical way – arranged marriage, opium trade, the MIL-DIL relationship and Communism – and worked it into their storyline not as something depressing, negative or horrible, but as something much more human.

I hear rumours Lin and Camilla might be back in further episodes, so I think there will be more to write about very soon.