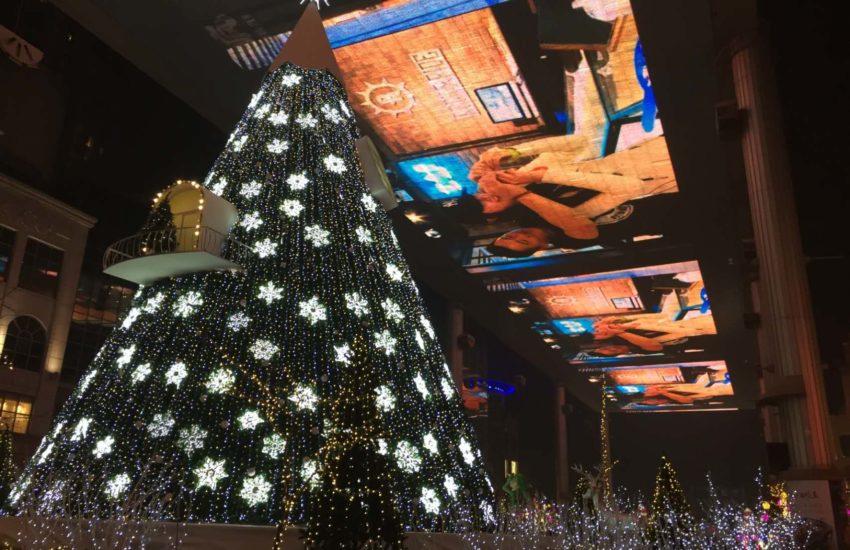 For many of us WWAMs embracing our husbands’ culture can be a fascinating process. However, moving to Asia for our spouses, the question arises of how to celebrate the main holiday of the year that most of us grew up with.

So today we have asked our WWAMs to tell us all about how they (used to) spend Christmas while living in Asia.

Christmas, aka “New Year’s,” in Turkey

As an international educator living and working abroad, we don’t always get the holidays we are accustomed to. One of the aspects of working in Turkey that was made clear to me before accepting my first contract was that I would NOT get the Christmas holiday (and New Year’s) off as a long break. Turkey is a Muslim country and our two-week “winter break” doesn’t occur until the end of January/start of February.

Considering that I’m on the other side of the planet, and my family in the U.S. is scattered across the country from VA to CA, we coordinate to spend the holiday together only once every five years. The most recent one was a year ago. I was grateful that my employer gave me special dispensation to attend. I will also say that Turkey does recognize that many foreigners observe Christmas and our schools give us the day off and our Turkish colleagues cover any necessary classes for us. This is a kind and thoughtful choice for Turkey to make. This year we will enjoy a three-day weekend, Dec 23-25, to do with what we wish. Some expats may gather together for food and drink, while others may opt to spend it solo while coordinating video chats to see and spend time with their stateside family and/or friends. The important point is we have a choice outside of traveling home.

So what is it like to celebrate Christmas in Turkey, which is on the continent of Asia (though it feels more European, if you ask me)?

Well, I can say it’s a bit strange for me to think of it actually being Christmas. I was raised in the Northwoods of Michigan, so to me Christmas means snow, cross-country skiing and sledding, cold and wind, the crackle of wood in fireplaces, snowsuits and mittens, and lots and lots of hot chocolate. Sitting in my apartment today I look out at the bay of Izmir, lined with palm trees, and watch people walking and biking as today’s temperature will be about 72 Fahrenheit or 22 Celsius (one week before Christmas!).

The tram that rolls past my apartment is adorned with sparkly lights and when you walk the streets you will see Christmas trees in shops and in homes. Though here the decorated trees are called “New Year’s trees” and gifts are given/exchanged within families on New Year’s Eve. Obviously the birth of Jesus has nothing to do with the traditions here. That is actually not so different from my family. Though I was raised with Christian traditions and we did go to church in my youth, no one in my nuclear family attends a place of worship nowadays. When Christmas arrives each year, we communicate about the food we will eat, who we will visit, the weather, our plans for the new year, but talk of Jesus is omitted. I guess we have become secular Christians.

This year I found myself feeling “in the spirit” and I put up my few small decorations. I have a very tiny tree, just over a foot tall, as well as my stocking, and a Precious Moments nativity set. They are all on display on a bookcase top in my living room. I have found myself in the mood to listen to holiday music as well. I attribute all of this to my choice to make a quick trip to London to visit my Turkish boyfriend there for the Christmas weekend. I’ll only be there three nights, returning on Christmas day to Izmir. But the thought of being in a country where I will see and feel a more traditional Christmas mood and energy is inspiring.

And, there could very well be snow and not a palm tree in sight! That has me excited!

Christmas has always been a magical holiday for me, one that has evolved as I grew. It’s a tradition in my family to get together with the whole family on the 24th and celebrate all the way to midnight, which is when you are finally able to open the presents. It’s a time filled with food and love, a time to recharge and make new memories. It would be blasphemous to miss even one.

Nevertheless, the first Christmas I missed was in 2012. I was lucky to be one of the few select students to spend a month in Beijing over the winter holidays as part of an exchange. Before knowing I had been accepted my plan was to go to London with my sister and surprise her with tickets to watch her favorite Korean band “Big Bang”. In the end, my flight ended up being on the same night, so my dad dropped me at the airport and then drove my sister to the concert. But I told myself it was okay, I was just missing one year. That year the university set up a small party for the exchange students and we also did small festivities ourselves. It was a cold snowy Christmas in Beijing that year and it felt like being in a fairytale.

The year after I was in Beijing again and celebrated with classmates and new friends, but soon after everything fell empty as students traveled home for CNY. It didn’t feel like Christmas and I vowed to try harder the year after.

By then I had met my husband, so I tried to get him into the spirit of Christmas, I remember even creating a small advent calendar with thoughtful gifts for him to find and open each day, he thought it was interesting but never got into the spirit of it. The year after it was even worse, we had to spend Christmas day with my then husbands boss, and to make it worse my mother-in-law was visiting us and had caused a huge fight. We were in Inner Mongolia living in a tiny town. Although I had tried my hardest to decorate and make it special, it was a really depressing year and I started to really yearn for being back home.

Thankfully that was my last ‘bad’ Christmas. Every Christmas after that was spent with my Beijing family. Not family of blood, but of love. Friends who I had made over the years and who made every Christmas special. We would take turns at hosting at each other’s houses and although celebrating Christmas wasn’t popular in China we still found a way to bring the spirit of the holiday alive. I remember the year my cousin visited and we had to haul a real Christmas tree all the way from Chaoyang to the Haidian district. Or the year when I was exhausted with a newborn and had given up on celebrating and Laura spent hours making scones and clotted cream, which I had never found in all my years in China.

I used to say that I missed out on 7 Christmases but really I was so blessed to have connected with a group of friends who became like family. Now we are all spread across the globe and so Christmases are spent with family, but a part of me can’t help but also miss my Beijing family during this period. Maybe one year we’ll do a reunion!

While I lived in China, I made it a point to go back home for Christmas every two years, but of course that meant I was staying in China, mostly in Beijing, every other year. I always kind of wanted to do an Orphan’s Christmas and since I had a lot of expat friends who didn’t make the trip either, I would just invite some of them back to mine. I had a friend over with her son one year and we got food delivered and munched on delicious Godiva chocs.

Then, in 2018 I had a friend (in fact Ana, who wrote the post above :D) and her husband with their baby, as well as two of their friends who spontaneously appeared. And I really, really enjoyed that. That particular Christmas I was kind of inspired in terms of food. A month or two prior I had discovered there was a German food seller in Suzhou, near Shanghai, that offered shipping across the whole country.

So naturally, I spent about 100 euros on all the sausages. Even though I’m not even a big meat eater, that’s the nostalgic thing that happens when you’re in a country other than your birth country. You have grown up with certain traditions or foods and crave them.

Then I decided I want to make some green beans, so I found a really good recipe online with bell peppers and walnuts as well as oven-baked cinnamon carrots. Ah, it was great.

Next I decided we needed a potato gratin because I mean, is there anything better in this world? It came out very nice. I was super pleased.

I’d also just had a Thanksgiving dinner with an American friend, where for the first time in my life I tasted sweet potato crumble. I am a huge fan of putting those two together. So I made this as a side but I made too much, so we never managed to finish it, before it went off. Still feel guilty because food waste is not good.

And then I made some lovely scones in my portable oven the size of a microwave. I am actually missing that mini-oven these days. I have a regular-sized one here and it takes so much time and energy to heat up – already dreading the energy bill.

I remember also trying to make clotted cream from scratch, which is an incredibly complicated process that takes ages. I do not recommend it if you have any other option to get your hands on it at the store or online. Making it yourself involves putting it in the oven at a very low temperature for like 12 hours or something and then although I love my wonderful oven, in this case, the cream turned out brown and kind of caramelized. It still tasted okay-ish. But of course, it didn’t look like clotted cream.

My friends brought us the most amazing cake and we just sat down, ate at around lunchtime. That Christmas lunch was definitely a massive hodge-podge; a food coma inducing hodge-podge at that.

I had the best time, it was such fun.

Got a bit narky with Mr Li because after the admittedly substantial food he was like “Oh, I’m tired now, so I’m just gonna go pass out on the bed.” And then he did that. I feel like this is one of the few Chinese culture issues that still tends to crop up for me: this idea that while guests are there or when you are with family, you can just go for a sleep. He does the same thing when we’d be visiting his family. He’ll come to his grandmother’s place and then he’ll just be like, “Okay, I’m going for a nap now in her bed.” It’s always been just a bit strange to me.

Anywho – in Europe I don’t get to do an Orphan’s Christmas because all my friends – the ones who celebrate Christmas – and myself just need a couple of hours to go back home.

How do you spend Christmas, we’d love to read all about it in our comments!

We also would like to thank you all for supporting us! Merry Christmas and a happy New Year.