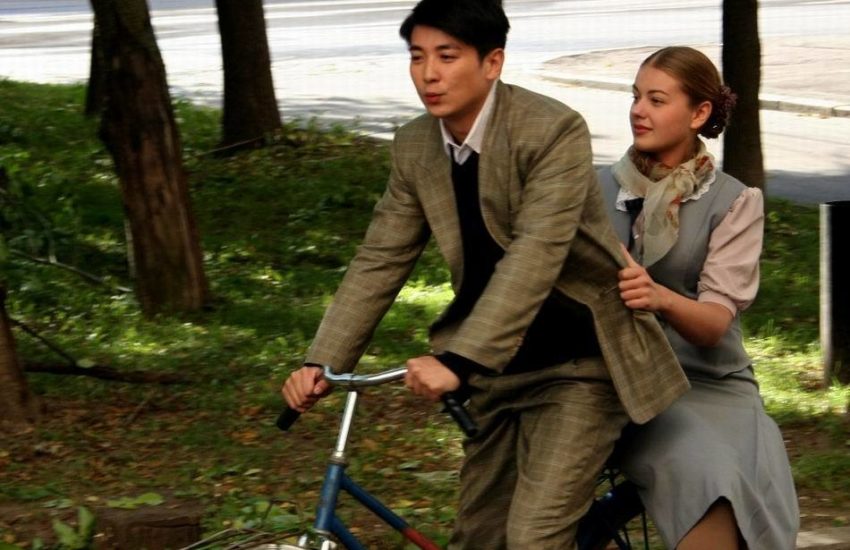 And we are back with “Where’s Wang” in Asia! Where is our special Asian male lead now in East Asia? Well, luckily, we have another Chinese drama, however, not as famous as “My Natasha”!

This drama is called 红莓花儿开, Red Berry Blooms, or When the Cranberries Open. It is another historical drama in which came out in 2009, taking place in the 1950s. This time the focus is on Soviet-Sino Relations and a WWAM couple named Shen Yan and Valiya. Valiya’s father was in the Soviet army during WWII and helped Manchuria defeat the Japanese. So, her knowledge of China and love of China in the future is partially because of her father’s influence.

Shen Yan and Valiya meet at Moscow University. He was an exchange student for about a year with some other Chinese students. They were in Moscow University to study aviation, but more specifically, how to make airplanes.

At first, when Valiya and Shen Yan met, their relationship was not good. Valiya hated Shen Yan. And they would play tricks on another. It was because Shen Yan had accidentally run into her when he was jogging. And to make worse, he bumped into her at the hallway at school. Their tricks on another was cute and made you feel like they were going to end up together.

However, while watching the show so far, the Chinese students at Moscow University were discouraged from dating the Russians. I thought this was unfair due to Valiya’s and Shen Yan’s developing relationship. Also, it makes sense. They are only there for a short period of time and would have to return home in the future.

When Valiya and Shen Yan started dating, they were in trouble. However, they finally got approved of their relationship. While watching it, you can see their relationship was developing slowly. They were not kissing each other and leaving public displays of affection behind until Shen Yan had to go back to China.

A few episodes later, Valiya and Shen Yan had to separate because he returns to China. Eventually Valiya and some other Russians come to China to help work in the airplane factories.

Although I have enjoyed watching what I have so far of When Cranberries Open, but, there are still some things that bother me with WWAM couples in Chinese dramas.

Could it be that modern day stereotypes of Western Women are not prevalent in China during the early to mid-20th century?

Hoping for someday to have more representation, especially in a modern setting for WWAM couples in future Chinese dramas.

So far, some comments from the show: