Every year, my husband announces that it is time for our yearly summer tradition. Most people would wonder what this tradition entails — is it a long journey out of the country, or possibly, a day trip nearby? However, many may be shocked to hear that instead of lying on a beach and enjoying ourselves, our tradition is a tasty one. If you guessed picking fruit, you were right!

In Canada, there are many farm items to be picked — however, it depends on the season. I recall as a youngster, picking tomatoes in September was a must, as coming from an Italian family, tomato sauce needed to be made at that time. From cutting to canning, then boiling, it was an immense process, something that took many years to perfect.

Over the years, I’ve assisted my various family members in canning fruits such as peaches, strawberries, pears, and apples, along with making spreads such as jam and relish. Although at the time, I wasn’t too keen on heading out to the farm, I now recall how entertaining it was, as we laughed and joked our way through our time, while preserving various food items for the winter months ahead.

When my husband and I first began dating in 2013, we thought that it might be nice to pick fruit, especially for making baked goods (which I am highly-fond of doing). Therefore, we started small, with picking apples in the fall, which was a lot harder then I thought!

From bending over to reaching high, I definitely needed a massage after that excursion! And the sun beat down upon us, which lasted long into September. I did enjoy the time we spent together, cherishing it as the beginning of our “farm picking” tradition. We ate a lot of apple cake after that first visit!

After our son was born in 2016, we stopped picking for a short while, focusing instead on keeping him fulfilled, as well as catching up on sleep ourselves! Right before his second birthday, we decided to brave the farm once again. This time, instead of apples, we tried something different; cherries.

After driving almost two hours to reach a desired cherry orchard, we lugged our water bottles, brought out our baskets, and grabbed all of the cherries that we could. This event turned out to be more entertaining then picking apples (mainly due to the sweetness each cherry presented when popped into our mouths as we picked).

My son had a ball, running from tree to tree, seeing how many cherries he could throw into the basket. Afterwards, we decided to treat ourselves to lunch nearby, while sucking on a cherry (or two), as we drove home. 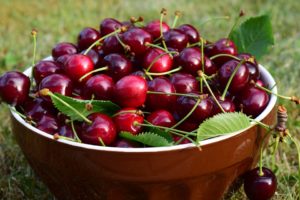 As my son enters his third year, we have decided to introduce another “farm picking tradition”; strawberries! This year, I was unable to attend the annual picking event. However, my son enjoyed his time with my husband’s family, bending down toward each plant, munching as he picked along the way.

After having the time of his life, my son was saddened when it was time to pack up and go. Nonetheless, we were able to eat strawberries for days afterwards, bringing him back to his adventurous time picking-away.

Although I do enjoy our yearly family tradition, we have had to scale down somewhat, as the weather is getting hotter, and our bodies are getting older. However, creating this family tradition with my son is something that I hope he will cherish, and carry on with his own family down the line.

Do you share a farm picking tradition with your family? If so, how has it brought you closer together?