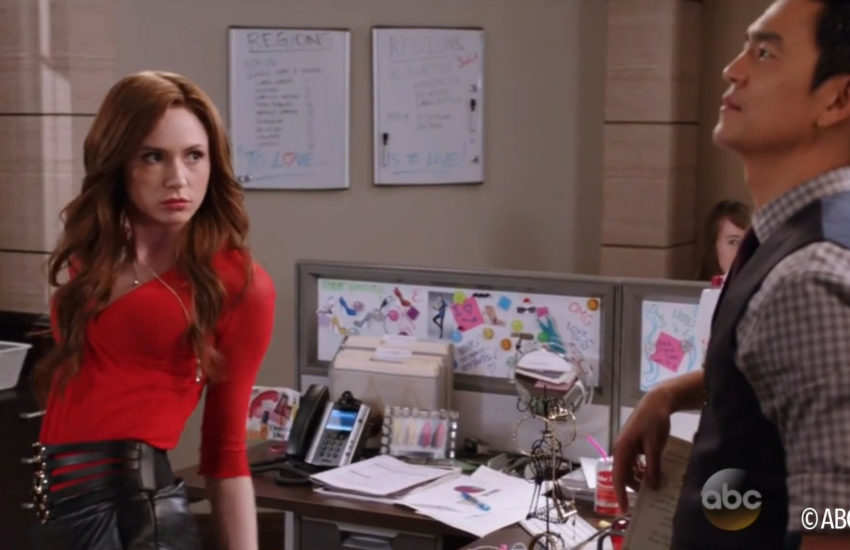 I knew before I even started watching Selfie that this was going to be a bittersweet experience due to the sad truth that the show was cancelled just after the first season. Scandalous! I also knew from the get-go that I was going to be easily won over – a remake of “My Fair Lady” with a twist starring the Star Trek reboots’ very own Sulu, as in hunky John Cho, poking fun at the millennial obsession with social media…sounded right up my alley.

After “light-binging” the series over the space of a couple of days, I hit the fateful final episode 13. Maybe that’s what broke its’ neck, picking an unlucky number of episodes – seen as the date they announced they were pulling the final episodes from being broadcast also on November 13th – but who’s superstitious here? All I can say is that to me cancelling that show was yet another sad, sad mistake à la Pushing Daisies. THE PAIN…it still hurts.

Aside from the fact that the distant workaholic in a tux who acts as Eliza Dooley’s mentor is just about the dream for any girl with a taste for emotionally unavailable men and an excruciatingly hot Asian guy, the female lead is being played by Karen Gillan, whom Dr. Who fans and fanatics will know as the fabulous Amy Pond – to this day one of my personal favourite companions. She displays quite an impressive range of acting skills jumping from head-strong Scot to hip, girly and self-obsessed American chick in a manner that suggests she’s going places. I sincerely hope so, as she is certainly redeeming sexy Redheads from the Lindsay Lohan impact. JK. Though not entirely.

Aside from slightly analytically but mostly comedically portraying the LOL generation (I wonder if poking fun at a major part of their own intended viewership did not help the show take flight in the end), as the first season develops some stereotypes about Asians are addressed as well. Yes, the humour can be a little on the nose, and maybe that’s why the racial and generational issues fall a little by the whey side …or the show is simply a little more subtle with its message, depending on your perspective.

The only slight disappointment from my side came in form of the romantic partners for John Cho. Sure, I love a WWAM couple but both past and present all the romantic interests of Henry Higgins are white girls…as white as they could possibly get. He actually even snubs the girl that Eliza and her co-worker choose for him, a cute Asian girl who works at Starbucks. The world is such a diverse place, could there not have been women of colour in his dating repertoire? This is the only aspect of the show that I didn’t particularly enjoy, considering the race dynamics that can be at play in these relationships. For a show that is trying to go against the grain, this was a little bit too whitewashed.

However, overall, this reimagination of a film classic is well-worth the watch, especially as it goes into the sparring between the two main characters, who complement each other so well. Fun is made of everything and everyone, and Selfie just doesn’t seem to take life, itself and first and foremost all those InstaMillenials and Workaholics too seriously. The only advice I can leave you with is to pace yourself as the small amount of 13 episodes of this show flash by far too quickly! Seems like the world wasn’t quite ready yet for a big WWAM adventure.