When I married in China back in 1995, many members of my family had grand plans to attend my wedding and make a vacation out of it that summer. But flying to China from Chicago wasn’t as easy — or inexpensive — back then as it is today, so when it came down to it, it was just my parents, brother, and uncle who made the trip across the Pacific and joined my then-husband and me in Shanghai. I was so grateful.

There were no non-stops from Chicago to Shanghai back then, so they flew through Tokyo or Seoul (I can’t remember which) and then on to Shanghai. I recall eagerly awaiting their arrival and excited I’d be spending the next two weeks with my family from back home (although my brother could only stay for a week). Thanks to my parents, we stayed at the Peace Hotel, which was majestic, yet bare-boned, and hadn’t yet been renovated to its full glory.

We picked up these postcards from the gift store at the Peace Hotel. Shopping in China was nothing like it is now. After traveling around China with my then-husband for six weeks before this, I hadn’t seen one postcard. Old Shanghai was coming back in 1995 in a big way. Books and movies and television shows all celebrated 1920s and 30s Shanghai. You could tell change was in the air when pre-1949 China was deemed a good thing. 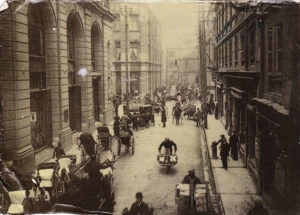 I also found this modern postcard and sent it to my paternal grandma back in upstate New York.

Shanghai is and has always been my favorite city in mainland China and I was relieved we could spend some time there after hanging out with the in-laws for a few weeks in Hubei province and spending a couple weeks in Suzhou and Wuxi with my then-husband and his PhD advisor (although the advisor and I bonded over our North American and Hong Kong privilege; we were used to both, but not mainland China). When my family arrived, we roamed the streets of Shanghai and enjoyed the pedestrian-friendliness of the city.

The subway was brand new back then and didn’t go to all the places it does now. What shocked me was that human beings — and not machines — took subway tickets when passengers entered the platform area. I couldn’t imagine how rush hour went down in a place almost three times the population of New York City.

My dad always liked to compare monthly wages and the prices of consumer goods in the countries he visited. Here he’s checking out refrigerators on Nanjing Road and figuring out how long people would need to work to earn a fridge. He took meticulous notes because he submitted an article to the New York Times Magazine, but they didn’t want it. I wish I had those notes now.

Mind you, this was back when most people couldn’t own cars and most businesses were still state-owned. There were very few luxury goods in China. Deng Xiaoping’s to-get-rich-is-glorious southern tour had only taken place a few years earlier. Things were just starting to happen in China and Shanghai was at the forefront of that.

My then-husband’s hometown in Hubei province — two hours outside Wuhan — was a different story. It was a world away from Shanghai in many ways and reminded me of the China I first saw seven years earlier. Hidden River is the English name of the small Hubei city where I got married.

My family stayed at the nicest hotel in town.

The villas were barely finished and some didn’t have working air-conditioning (it was 40 C) or had leaky faucets. All the rooms reeked of mold. Still, these villas seemed nicer than the hotel’s main building. This was the height of white bathroom tile and blue window architecture. I saw it all over China that summer.

And now for the wedding! Chinese weddings don’t have rehearsals or rehearsal dinners, but the day before my wedding banquet, we went out to lunch with the only person in my in-laws’ work unit who spoke English. He interpreted for my family and ended up becoming a close family friend in Chicago some years later.

This is the car I rode in to the banquet the next day. The Volkswagen Santana was the car in China back then.

And this is the rest of the motorcade at my former in-laws’ work unit, or danwei . There wasn’t much private housing in China back then and certainly not in Hidden River.

When we arrived at the wedding venue, a brother-in-law greeted us with firecrackers. This was probably about the most traditional thing we did at the banquet. I have no idea what a wedding tea ceremony looks like or if the bride’s or groom’s family gives gifts to the other (my family brought gifts from the US, but that had nothing to do with the wedding) or about the games friends and family force on the couple. We did none of these things. My former father-in-law is a member of the Communist Party, so we were supposed to have a modest motorcade and banquet. But because I’m a foreigner, we were able to have five cars in our motorcade and twenty tables at our banquet.

Inside the banquet hall, it was hotter than Hades, but it wasn’t like men were wearing tuxedos. I actually prefer the fashion in this photo. Simple white tops and sensible (although polyester) pants with zero pretension.

My family had the posh dishes at the banquet, while the rest of us were served more everyday fare. Check out the fatty pork, fancy baozi, and hearty soup at my family’s table. I officially went off pork that summer.

After this raucous event, my parents, uncle (my brother had flown back to the US by then), then-husband, and I headed out to Chongqing for a boat cruise down the Yangzi to see the Three Gorges.

We were the only non-Chinese on this boat of 500 people and often saw the foreign boats cruise past us, but we had the more authentic experience with rats in our room and the same old cabbage and rice for lunch and dinner. When in China!

I said good-bye to my family in Shanghai and after we had another stay at the Peace Hotel. I wouldn’t return to Shanghai for 20 years after that.

And I wouldn’t spend another summer in China like that. The following summer I was forced to leave Hong Kong for the US to change my Hong Kong student visa to a work visa. In 1997, I also didn’t return to China that summer because I was working in Hong Kong and didn’t have much vacation. (Returning to Hidden River at Chinese New Year was deemed much more important than a trip there in the summer.) And by 1998, I was back in the US and the new mother of a son who is about to turn 20 and move to Shanghai.

I’m grateful for that summer in China, before everything changed.