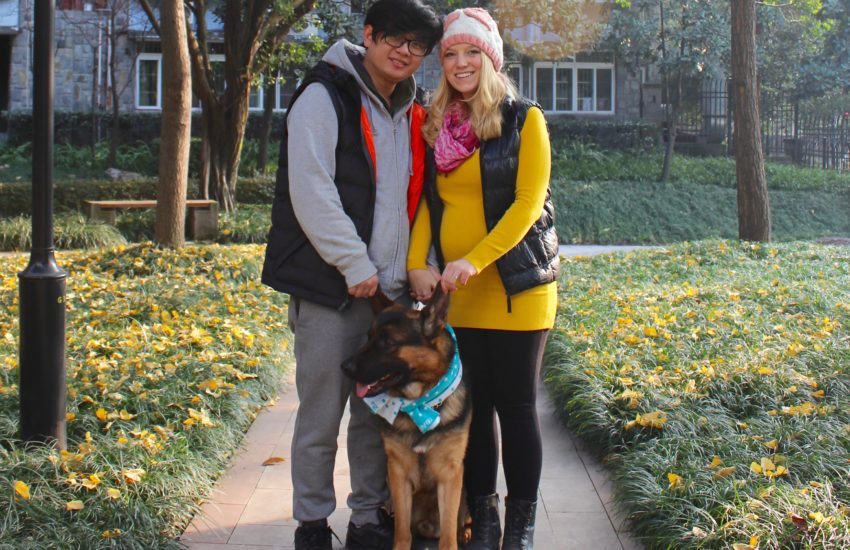 It’s no secret that living abroad changes you. While those changes are usually positive — becoming more accepting of others, more adaptable in new situations, and increasingly knowledgeable about the world — there are certainly downsides as well. One thing I’ve noticed about myself is that in China I’m much more quick to anger than at home in the US.

One evening I decided to go on a run with our German Shepherd, Damon. I jogged on the path in our complex with Damon on a leash close by my side. Upon seeing us, a woman dramatically jumped off the pathway into the grass and said, “太吓人啦！”, “Too scary!” On the next lap the lady jumped aside again and scoffed loudly. I reminded her, “公共场所，我们都可以用””This is a public area that we can all use.” I felt proud of myself for having kept my composure, but as I rounded the next lap to find that she had called a security guard, I quickly lost it. As if a switch inside of me had flipped, I just started screaming at her, telling her it was none of her business, and if she didn’t like seeing my dog, she should get lost. I even yelled at the security guard for suggesting perhaps I find a nearby park instead. Eventually she and the security guard left and I finished my run. At home after my anger faded, I felt embarrassed. Had the same situation happened in the US, I would have never yelled like that. And this is only one small example of when I’ve lost my cool without good reason. Why am I so angry only when I’m in China?

Even for someone like me who can easily communicate in Chinese, I still believe the language barrier plays a part in my exaggerated temper in China. In my native language I can express anger and displeasure in a variety of different ways, most of which are more effective than yelling or cursing. But it’s not so easy in my second language. Concocting a perfect retort would take some time, by which everyone involved would have probably walked away, assuming I didn’t speak Chinese at all. In hindsight, perhaps that would have been a better outcome.

When I first arrived in China, I often felt irritated with daily occurrences that were unfamiliar to me, such as people smoking indoors, or strangers commenting on my appearance, or the relatively chaotic traffic conditions. Especially for WWAM women, expressing frustrations over such commonplace things in China may not be well understood by our Chinese significant others. Imagine if living in a Western country that practices tipping for services, your significant other often complained about having to tip. Wouldn’t you ask, “Everyone else accepts it without complaint, so why does it bother you so much?” But knowing you shouldn’t be bothered by something doesn’t mean the irritation will immediately subside. I’ve learned not to irk my husband with these kinds of complaints. But as a result, I think those daily frustrations add to each other internally, until they all explode out in one fit of rage.

Merriam-Webster Dictionary defines cognitive dissonance as a “psychological conflict resulting from incongruous beliefs and attitudes held simultaneously.”1 Although this affliction is not typically described in terms of culture shock, I think the two are closely related. When I moved to China, everything I knew to be right and wrong, to be normal and abnormal, was shaken up. I couldn’t fully let go of what I grew up with, yet I couldn’t help but begin to accept the ways of my new home. As a result, I ended up holding two separate but different beliefs on a variety of matters.

As I referenced in my story about jogging with my dog, pets are one of the matters that has caused a lot of cognitive dissonance for me in China. In my home country, pets are considered to be members of the family, and are regarded as being generally good for the mental and physical health of their owners. By contrast, in China pets usually occupy a much lower status—they are widely considered to be detrimental to owners’ health, and are believed to be a dangerous liability, particularly in families with babies and young children. Unfortunately, I can rationalize and understand both of these different viewpoints in my head. I’m conflicted! Perhaps the discomfort of cognitive dissonance is why when pushed on this topic, I just blow up.

Do you have a worse temper while living abroad than in your home country? Do you have any other explanations for this phenomenon?