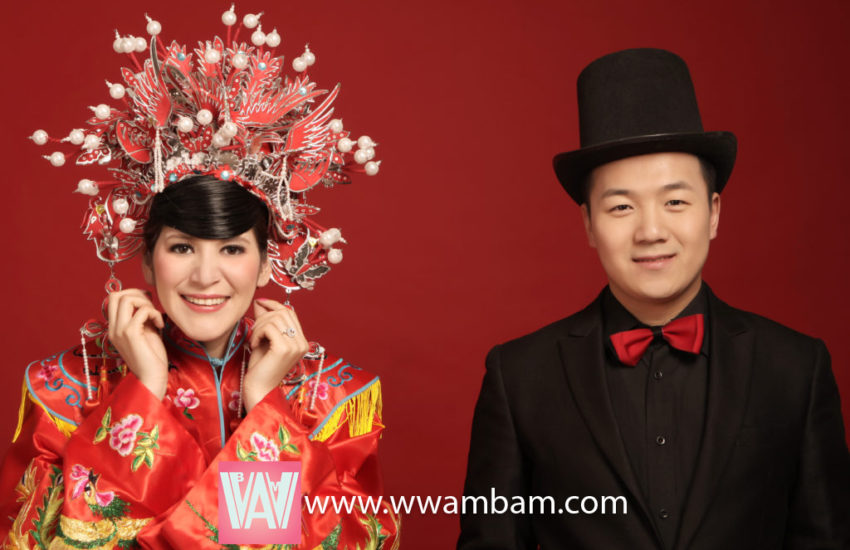 It’s January 2018, the start of a new year — and a new round of stunning photos of Asian male/Western female (AMWF) couples who got married or engaged!

P.S.: Would you like to be a part of an upcoming post in this series? Read our guidelines for submitting your photos, then send yours to Jocelyn at jocelyn(at)speakingofchina.com. 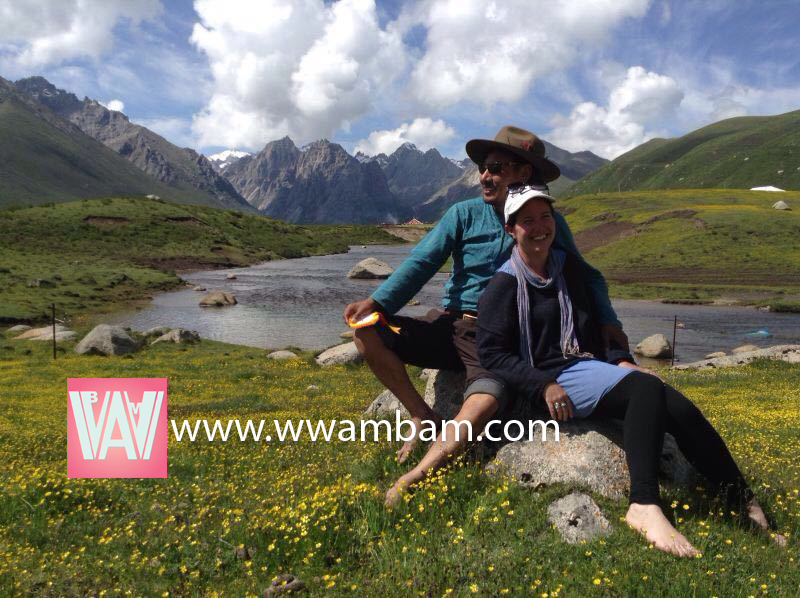 Kristel Ouwehand is an artist from Canada married to a Tibetan man, and she started a nonprofit art and culture school together with him in Labrang (Xiahe), Gansu province of western China. Kristel’s school is in danger of closing by March 1, 2018. You can learn more and help support them at www.snowlandart.org, their GoFundMe site, the school’s Facebook page, and their Instagram page. 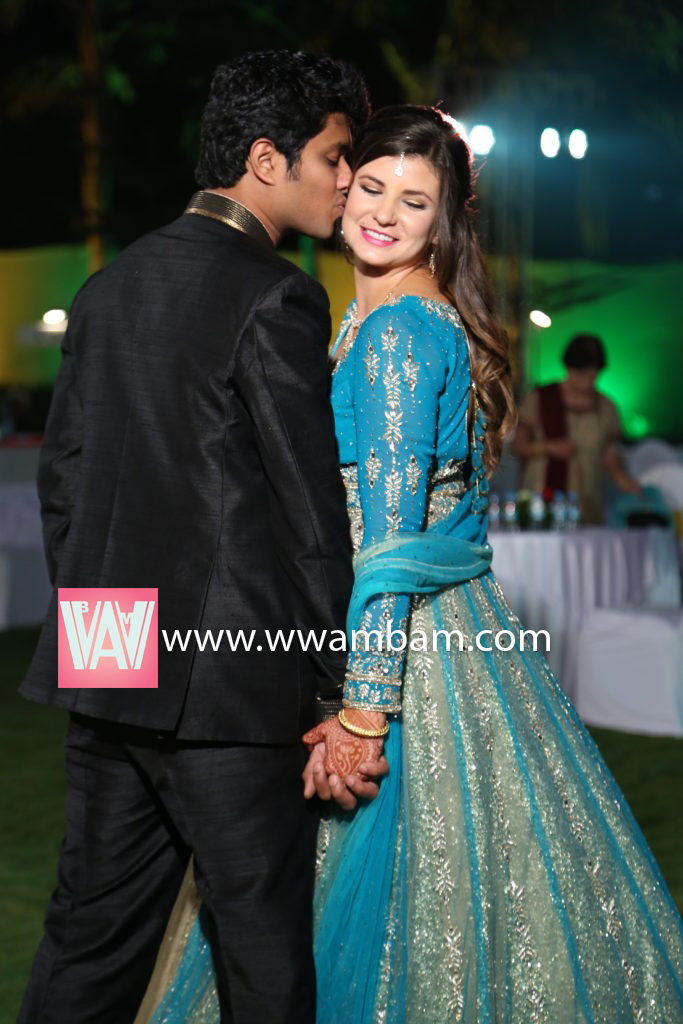 Amy and her husband.

Chelsea and her husband.

Nicole writes, “My name is Nicole and I am American and my Husband, Ân, is from Ho Chi Minh City, Vietnam. We met in college when he came to study as an international student at my university. We were married last May in America and we incorporated the Vietnamese ceremony and traditional dress as well.” You can view their wedding video here. 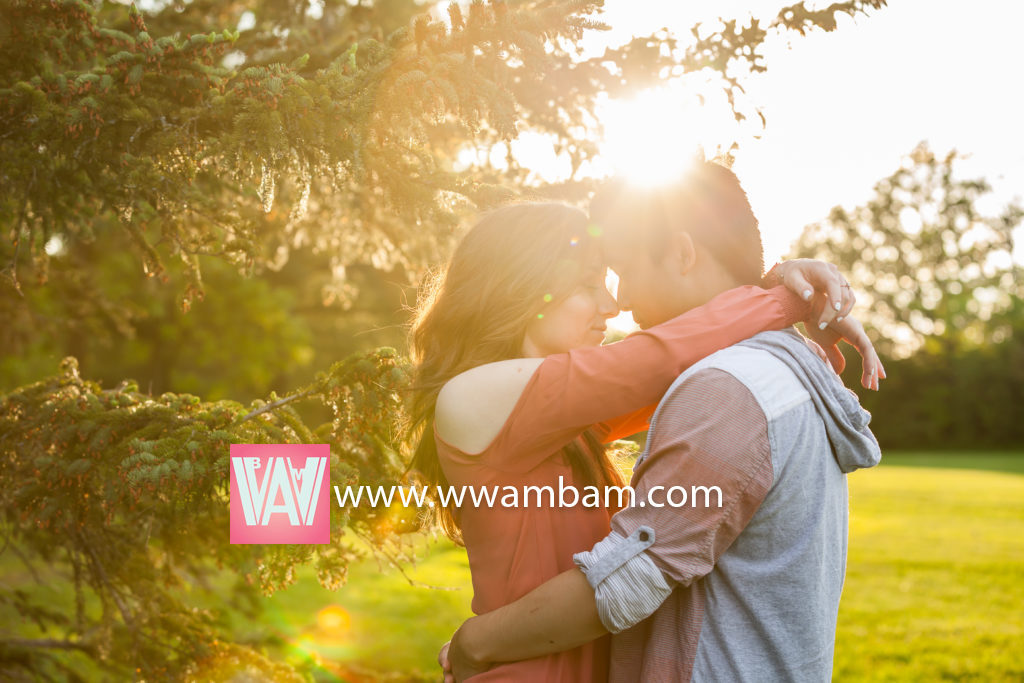 Margaux writes, “I was born and raised in France, and came to Canada six years ago originally to study. After my degree I decided to stay in Quebec, the only French part of Canada, to work. Yifeng, my fiancé, was born in Harbin, China. He grew up there until he turned 8 years old, then moved to Ontario, Canada with his family. We are both gamers (video games), and that’s actually how we met in 2016! We decided to travel once a month to see each other after that, until I finally moved in with him last year. We are getting married on June 22, 2018. He is my true love and best friend!” 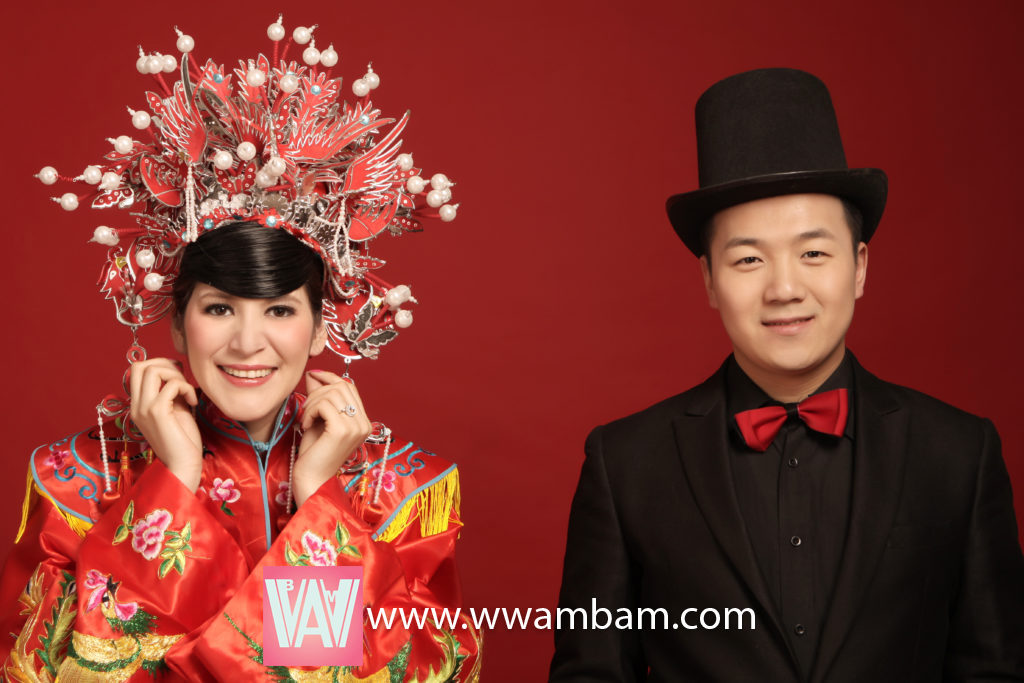 Tiffany writes, “My husband Zheng Jian (Chris) and I have been married since May 2012. We got married in Yanjiao, Hebei province just east of Beijing, and have been a couple since 2009, when we met while working together. I am Canadian Aboriginal, Chris is from Shanxi China.” 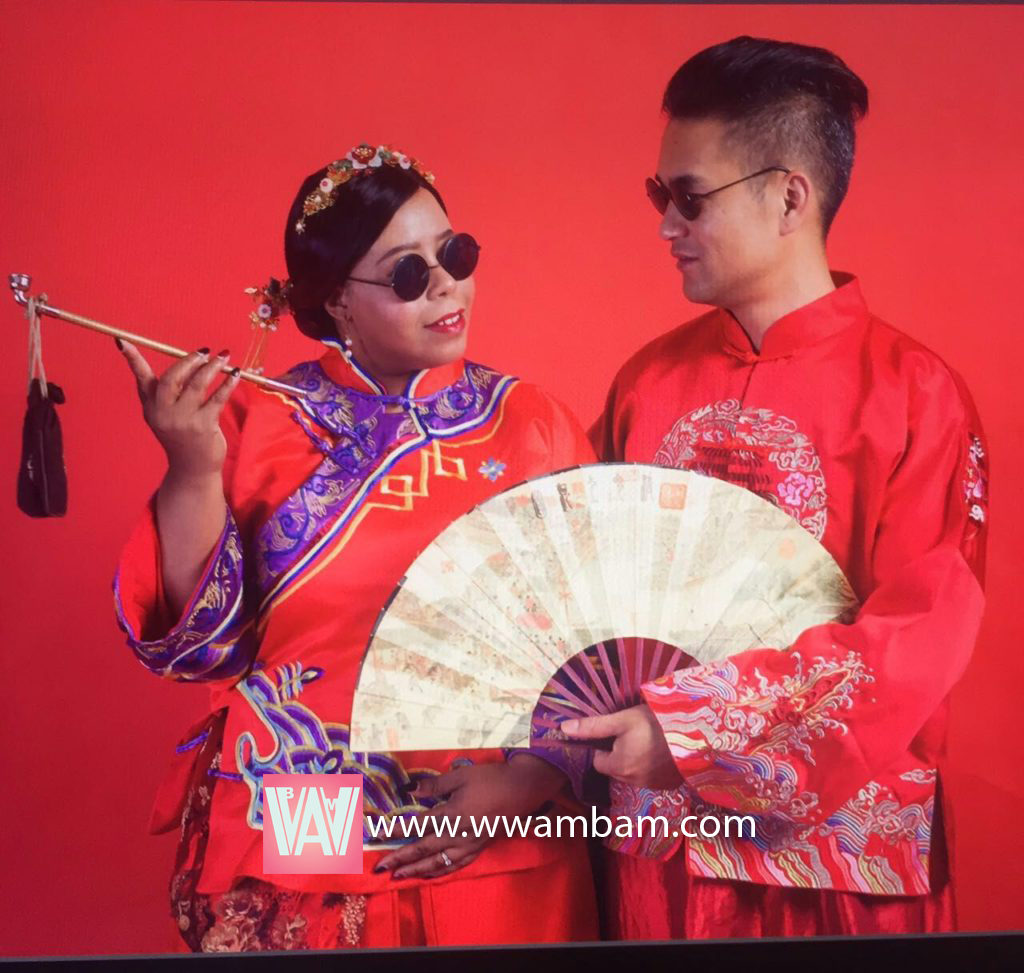 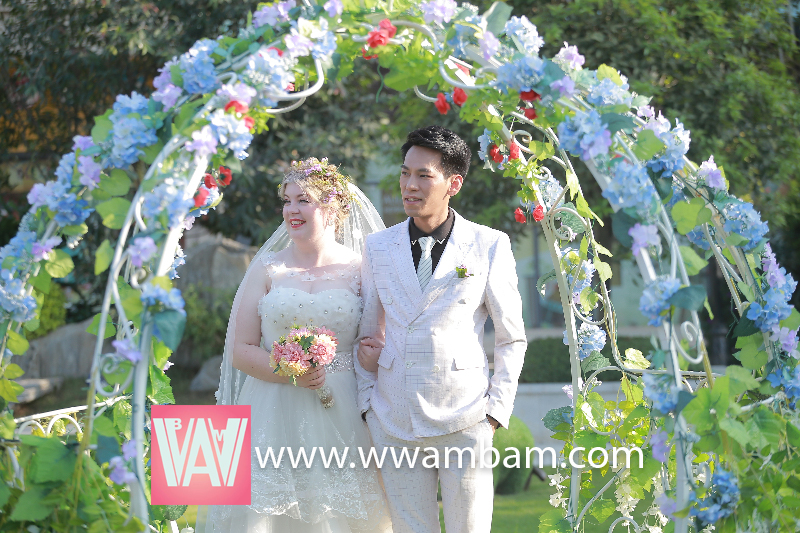 Caitlin writes, “We are based in Australia, living in Perth city. My husband’s name is Jun and he comes from Yulin (Guangxi province). These wedding shots are taken in Yulin. I was born in Australia and Jun came to Australia to study in his early 20s. We met in 2011.” 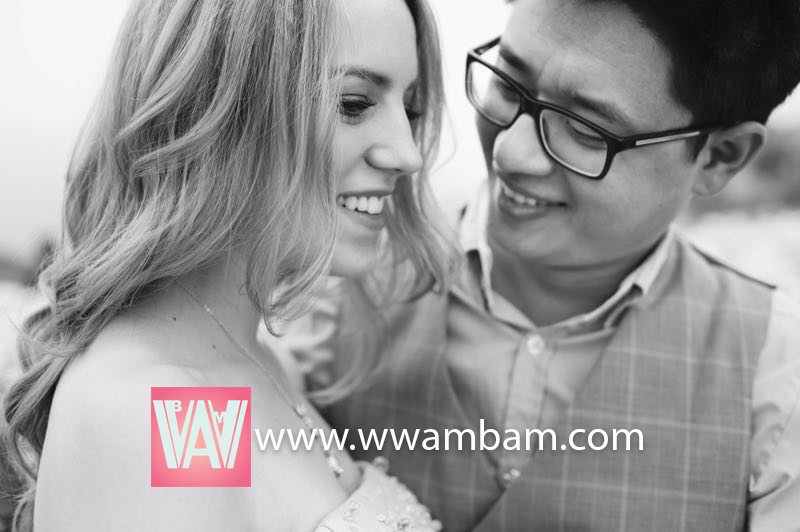 Our WWAM BAM contributor Julia Chen from Seattle, Washington, USA. She has been married to her Chinese husband for over three years. Together they live in Chongqing with their 1-year-old son and 3-year-old German Shepherd dog. 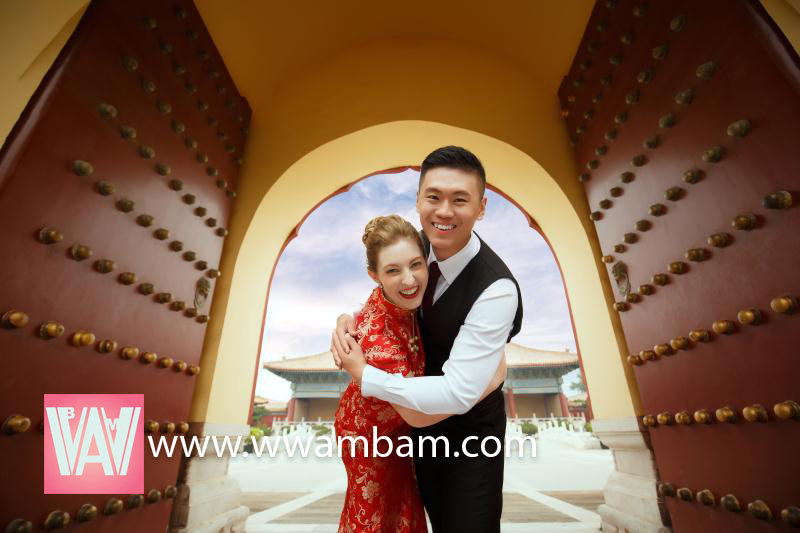 Jessica (USA) and Roy (China), who are getting married in April 2018. Jessica says of him, “He just kept impressing me. His kind and gentle mannerisms, his patience, his perseverance, his acute awareness of people’s feelings. He reminded me of a Chinese Clark Kent. As corny as this sounds, he really became my superman.” Roy says of her, “Everything seems perfect for us. I enjoy everyday and every moments with you. I believed happy wife happy life. Love you so much!”  Read about their story on their wedding website. 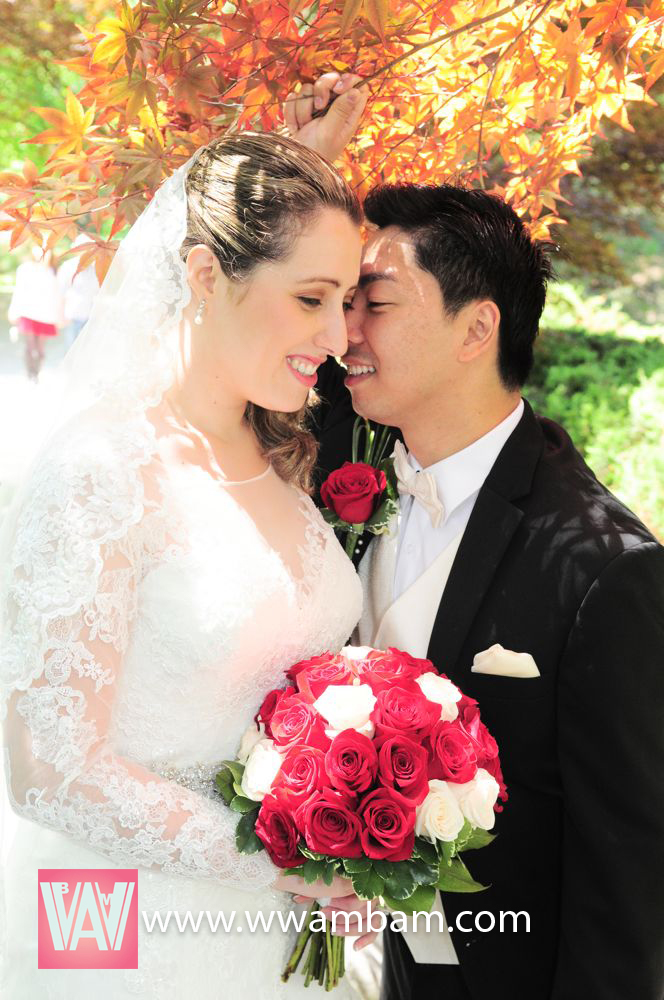 Maria (Canada) and Guang Jie (also known as Joey, from Guangzhou, China), were married in Mississauga, Canada, in June 2014. They now have a 15-month old son named Albert. Maria loves learning about the Chinese culture, such as learning to eat with chopsticks. Joey is learning how to kiss relatives on both cheeks upon greeting them. They currently reside in Mississauga, Canada. Maria is eager to meet more AMWF couples from all over. 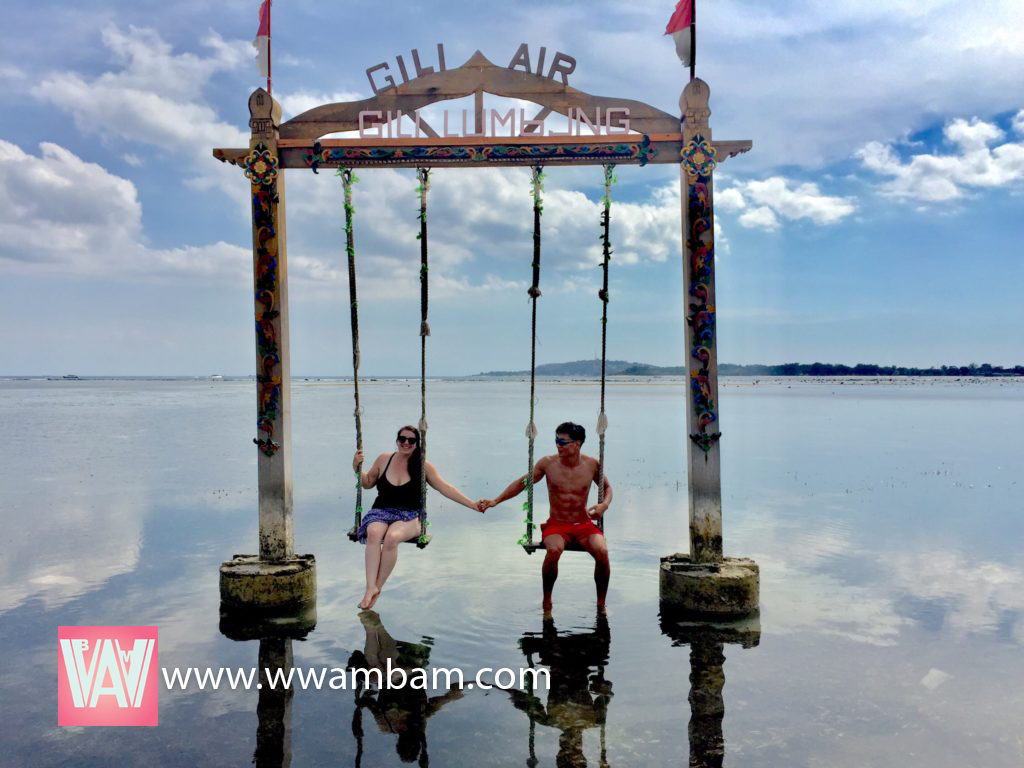 Ashleigh and her husband.

Rebecca writes, “My name is Rebecca and I am American. My husband’s name is Zhaohui and he is from Hubei, China. We have been together for nine years. We now live in the US and have a 1-year-old son. This picture was taken during our engagement photos in my husband’s hometown in Hubei. We actually had four wedding ceremonies! The two biggest wedding celebrations were in upstate NY (our American wedding) and my husband’s hometown in Hubei (our Chinese wedding).” 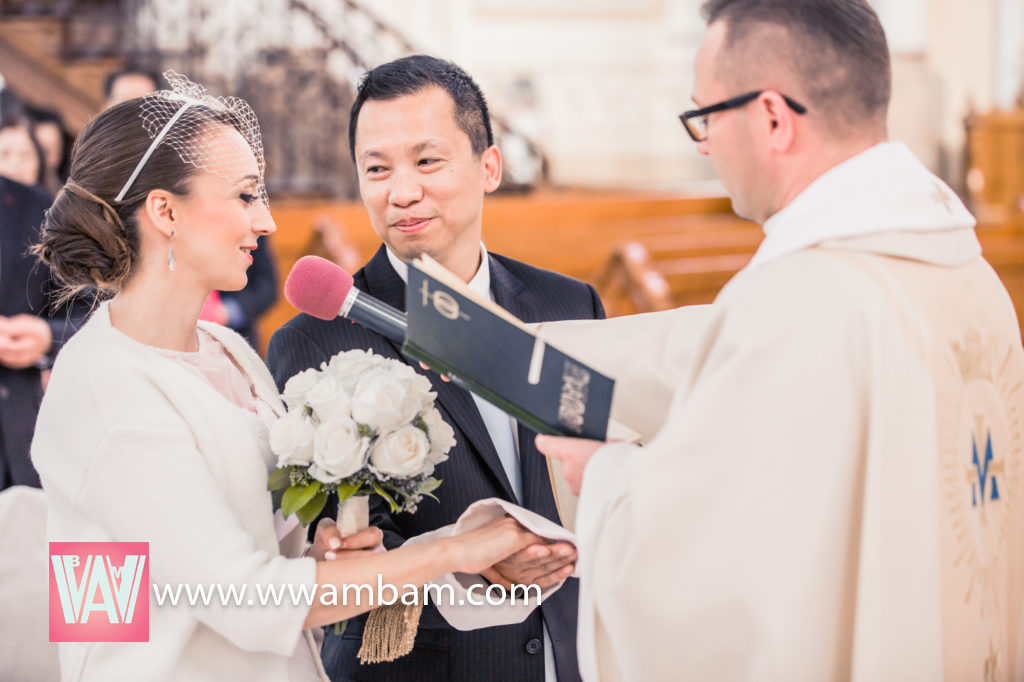 Annareco (Poland) and Mark (Taiwan) met on one of the dating sites in 2014 while she was working in Beijing, China. They got married in Poland in 2016. Annareco blogs about AMWF relationships and interviews cross-cultural couples to inspire others to take action and find the love of their lives.

Katie writes, “We are Katie (from Indiana, USA) and Shane (from Zhejiang, China). We met at our church in China and were eventually married there. Sometimes it was lonely being the only WWAM couple in our area, especially when we were dating. However, we recently started a book club for intercultural couples, and it’s been a lot of fun and really amazing to support and learn from each other. We just discovered the online community at WWAM BAM and appreciate it so much!” Katie blogs about Korean dramas and expat life in China at Adventures in Asia. 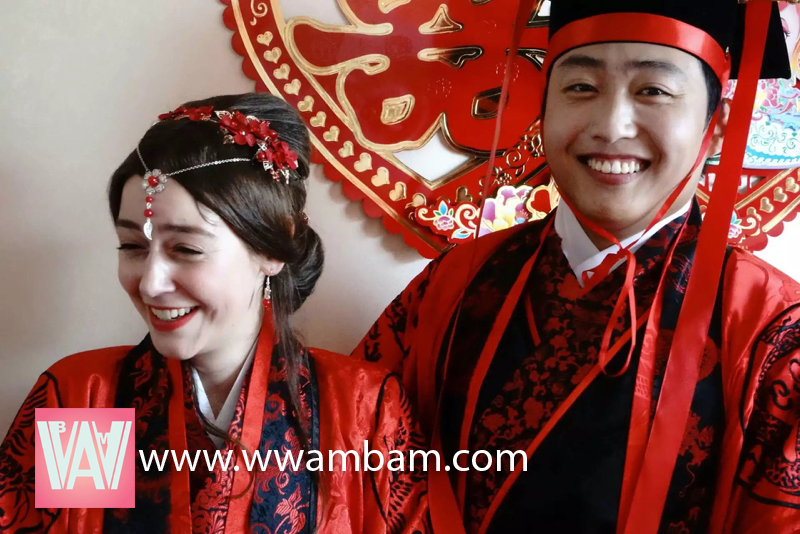 Janneke writes, “We are Yifei and Janneke Chen. He is from Henan China, and I’m from the Netherlands. We met through the sport of fencing, and share this hobby even today. We had our Dutch wedding in 2015 and a Chinese Han-style wedding in 2016 — you can see our Wedding Video. We live in the Netherlands but go to China every year.” 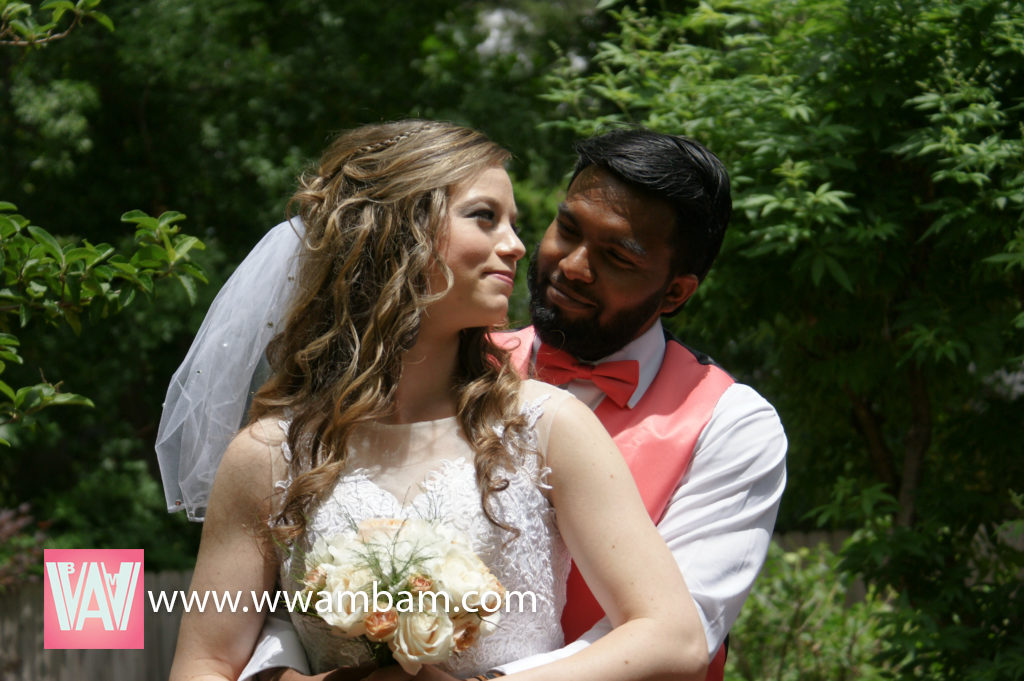 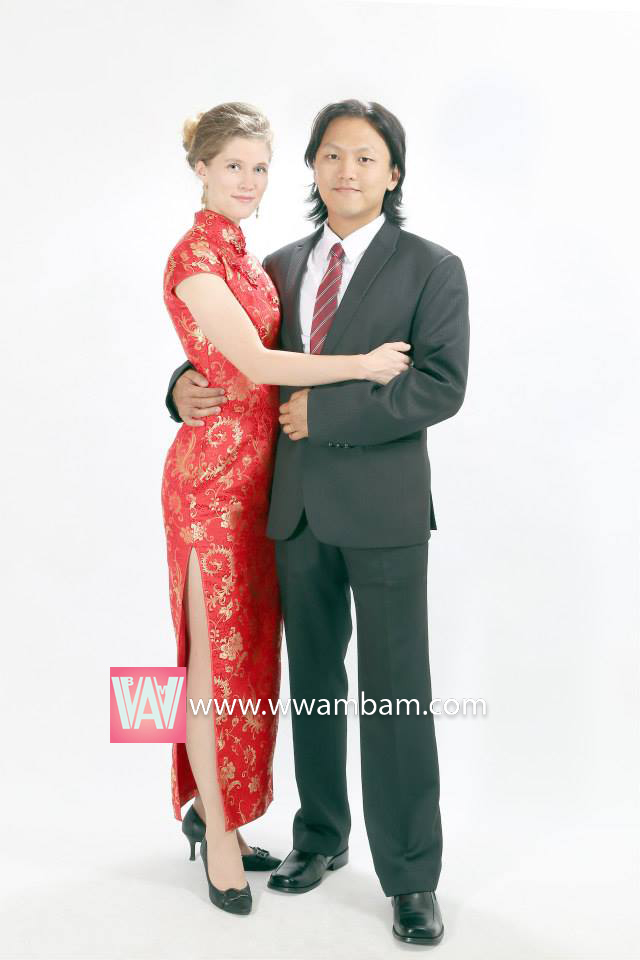 Anne (Michigan, USA) and husband Aitch (Taoyuan, Taiwan) have been married for four years. They met in Linkou, Taiwan and currently reside in Singapore. 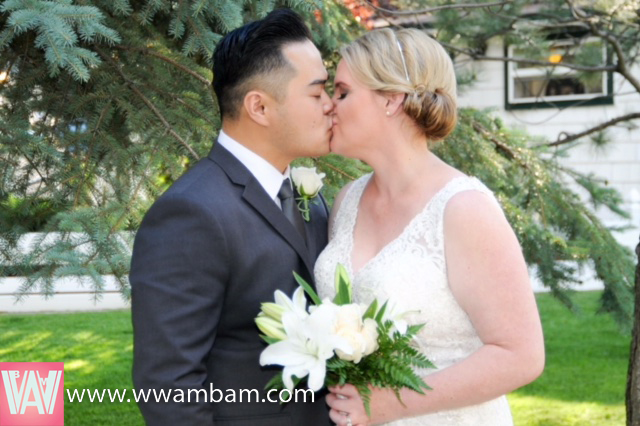 Patricia writes, “My husband, Daniel Dao, and I were married this past summer in South Lake Tahoe. We’re expecting our first child, a daughter, next month. We’re both native Californians. Daniel is a first generation Vietnamese-American and grew up in San Jose, CA. I’m a girl from rural Northern California and am a fifth generation Californian. We love to go wine tasting and enjoy all kinds of different foods. He’s the funniest and most amazing man I’ve ever met. Life with him is always an adventure.” 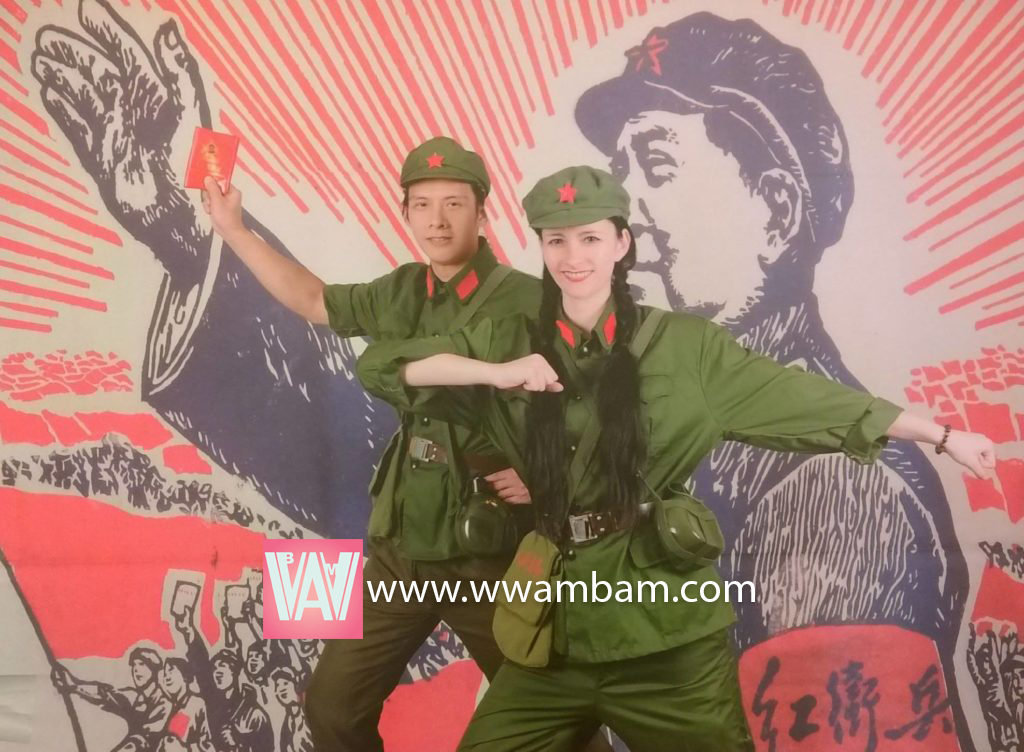 Annette writes, “My name is Annette Borchert and my husband is DuPing. We got married in England and our honeymoon was spent in Scotland, on the isle of Skye and in the Outer Hebrides on the Isle of Harris, – but we both live now in Urumqi, Xinjiang. We work in education, teaching IELTS and German and sending students abroad, and our website is www.languagemagicians.com.” 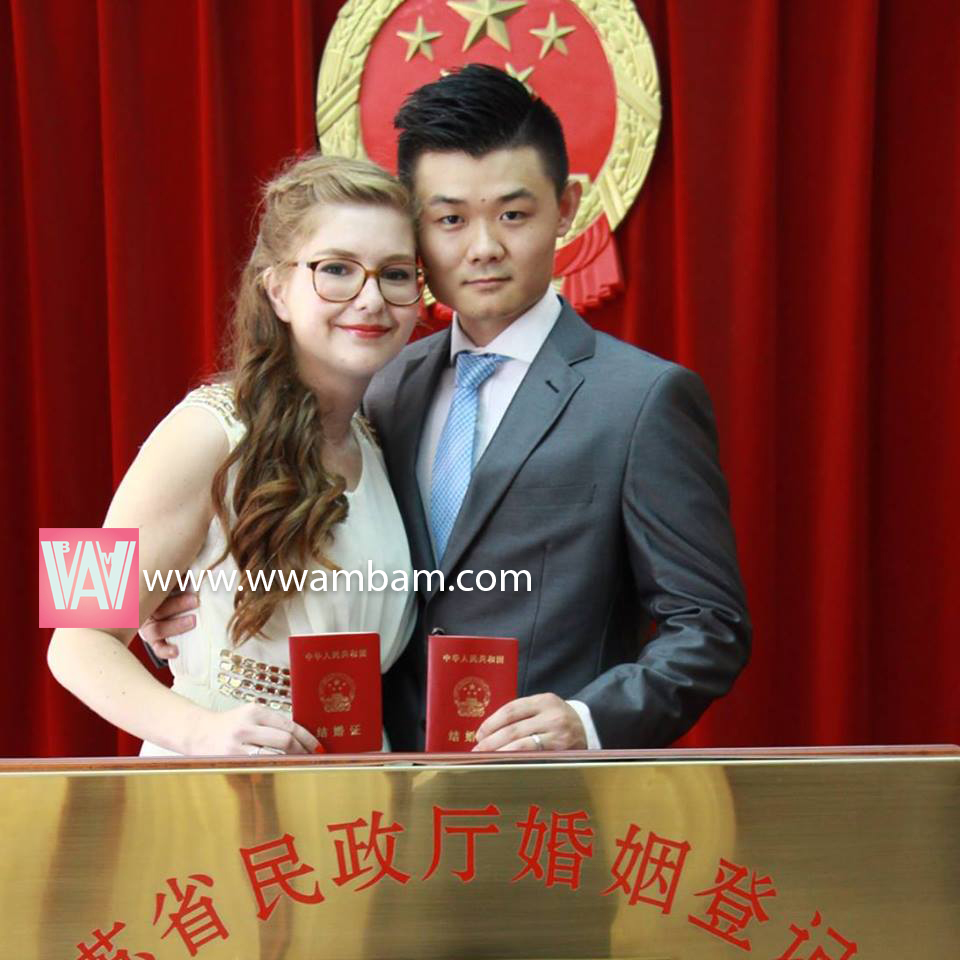 Yu Chao comes from Wuxi, Jiangsu, and Gisella Yu-Stap is Dutch with Indonesian roots. They met while studying at the same university in Emmen, the Netherlands, in 2012 and got married in Nanjing in 2015. They currently live in the south of the Netherlands, where they enjoy learning from each other’s culture and world views. 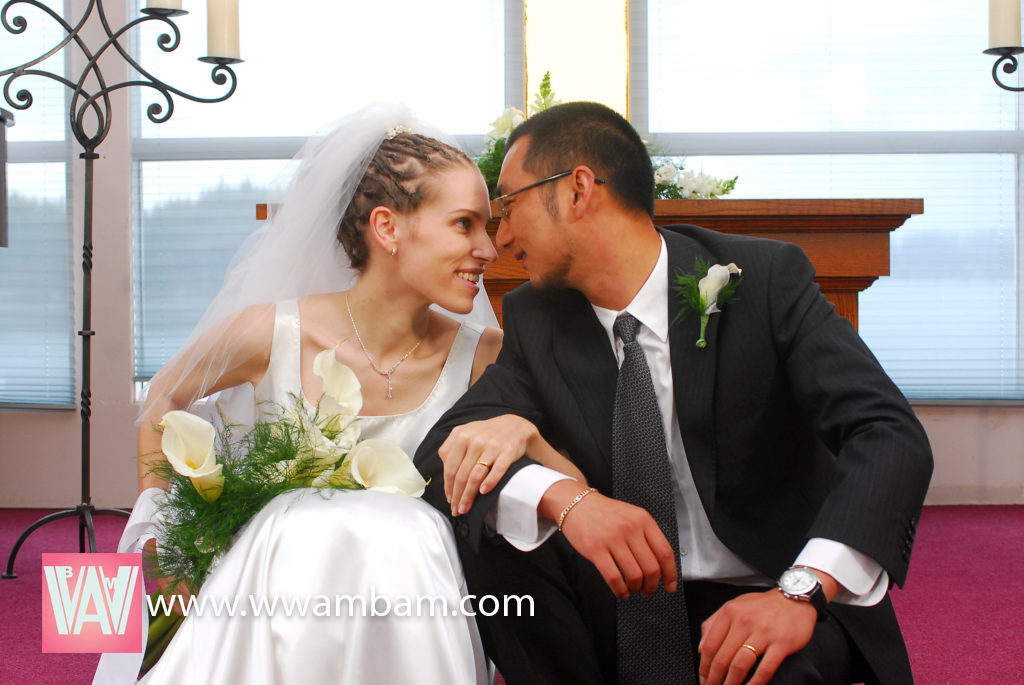 Marli writes, “Our names are: Marli McFarland (or 玛玲 in Chinese) and 徐辉 (or Shane in English). We are from Washington State, USA & Zhejiang Province, PRC. We were married three different times: a civil ceremony in Ningbo, China, then a family reception-style wedding in Shipu, China, and finally a traditional Western-style wedding ceremony in Gig Harbor, USA!” 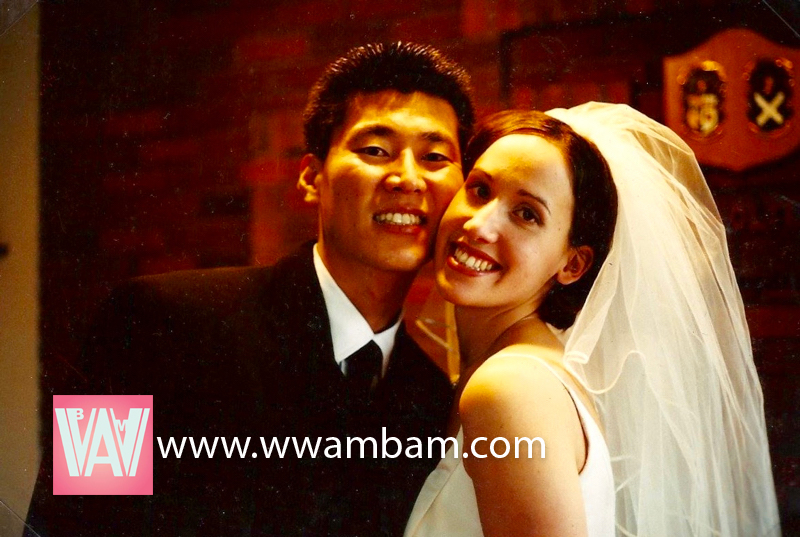 Leslie (Canada) and her husband (South Korea), who now live in Canada with their four children. She shares recipes, comics and stories about life at Korea in My Kitchen.

This post of stunning photos of Western women and Asian men is part of an ongoing series that first began in April 2017. Would you like to be included in our next round of 25 AMWF couples? Have a look at our guidelines — then send your stunning photos (high-resolution, please) to Jocelyn at jocelyn(at)speakingofchina.com.