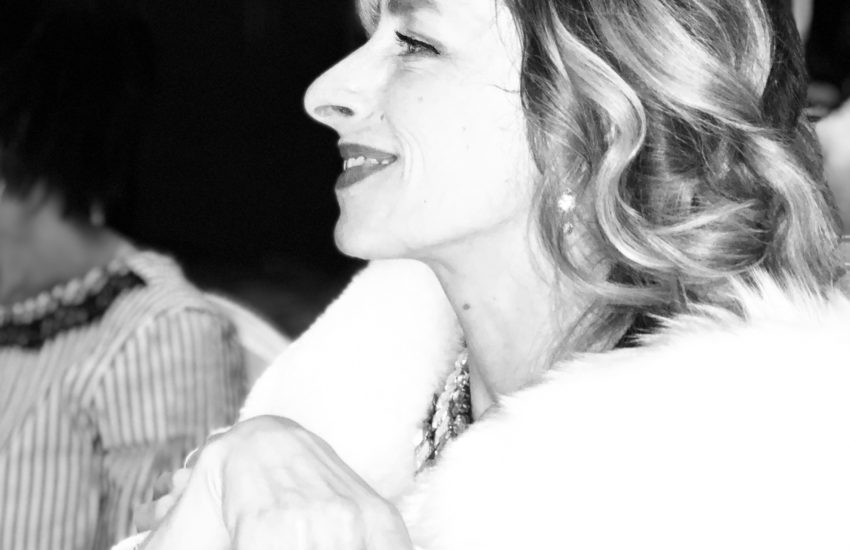 Several years ago, when I was invited to be a guest on the cross-cultural talk show “Crossover” on China Central Television (now China Global Television Network), one of the highlights of the experience was the opportunity to meet two other very talented women in the WWAM community, including Jess Meider. Jess sat next to me on the couch and I marveled at her at the end of the show when she and her husband Gao Fang performed a song from their musical group “Chinatown”. What a voice!

I later interviewed her on my blog (see Interview with Jess Meider, One of China’s Best Jazz Vocalists), where I asked her all about how she ended up in China some 20 years ago, how she met her Chinese husband Gao Fang, her start in the music scene in Beijing, and her musical projects over the years. You can purchase her music on iTunes and Amazon.com, follow her on Youtube and Facebook, and learn more about her at Jessmeider.com.

But Jess is more than just an incredible singer-songwriter with some outstanding credentials (such as performing in the VIP venues at the Beijing Olympics and having her music featured in the major Chinese movie “What Women Want”).

She has become known for the natural skincare serums and oils she and her partners sell through The Green Room Skincare company. And did I mention she is a prized instructor at the Yoga Yard here in Beijing?

Since interviewing Jess Meider in late 2015, I wanted to catch up with her in this WWAM of the Month spotlight, exploring everything from her new business and musical projects to what it takes to make a cross-cultural relationship work and how Beijing has changed since she first arrived. 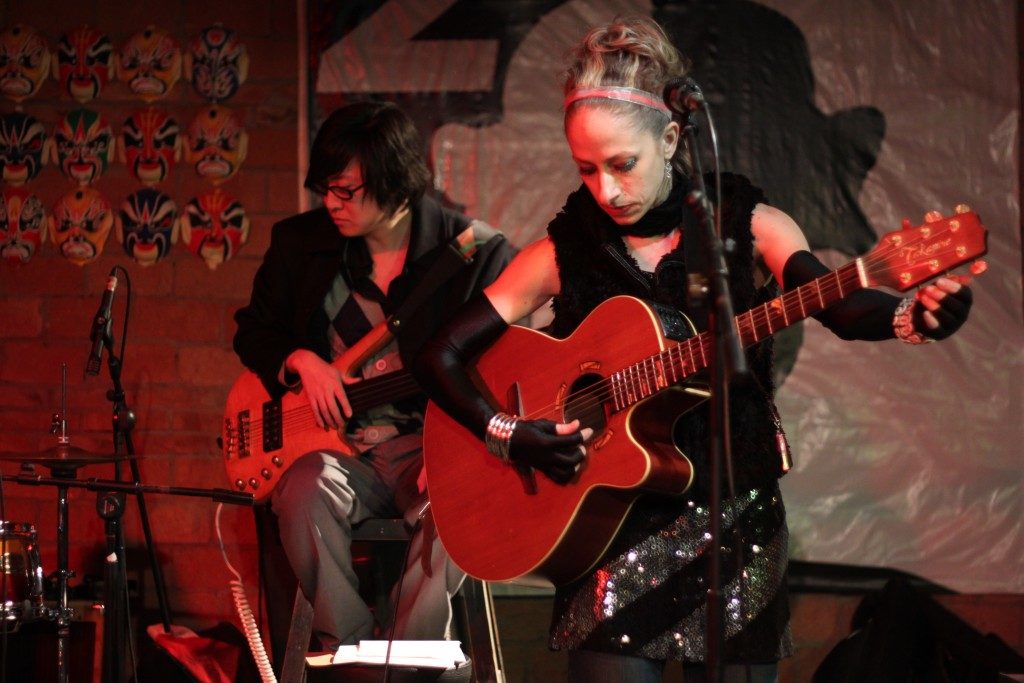 You’ve lived in Beijing for over two decades. How has the city changed over the years?

I was actually realizing that 20 years ago this year, I was planning my move from NYC back to Beijing, as I had spent two months in Beijing in 1997.

Beijing has grown so much that I feel it’s already passed its tipping points. I remember distinctly in 2010 that the amount of cars on the road had really begun to stuff Beijing. The population is ridiculous, with unofficial estimations in the range of 42-50 million. Last year so many waidiren [outsiders] left Beijing. The government realizes Beijing is absurdly overweight, and is taking measures to squeeze people out by closing down all the charming markets, evicting and disassembling pingfang shantytowns to make it difficult to live here. As though it wasn’t difficult already.

The tightening of rules is suffocating with such a high population. With all the renovations and face lifts, I find that the core of what first drew me to Beijing is less and less here. Beijing is obese, polluted and overexpensive. Bargains that used to be found in those fun markets are now online only. How I miss those fabulous restaurants that were just holes in the wall. The food used to be so good. Rents and cost of food have wiped all of that flavor and quality out. 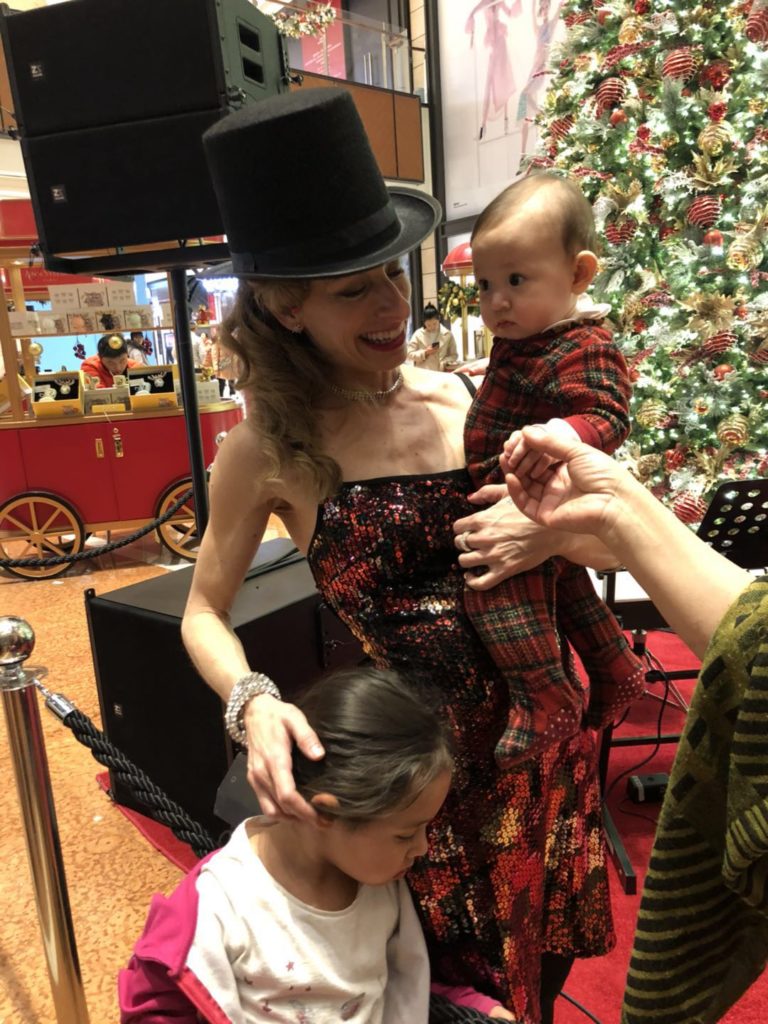 I’ve known you first and foremost as a talented musician and singer. Could you update us on your latest musical projects and any upcoming performances?

Well, I’ve been enjoying the holidays. I’ve not performed much since New Years. I gave birth to my second daughter 11 months ago, and I’ve been adjusting to a bigger family and twice as much responsibility! I’ve got some jazz shows in March (16 and 30 at Franks ALahouse in Central Park). I’ve got to mix my Chinatown electronic album. I will start writing/recording/performing as my free time flows back into my life. 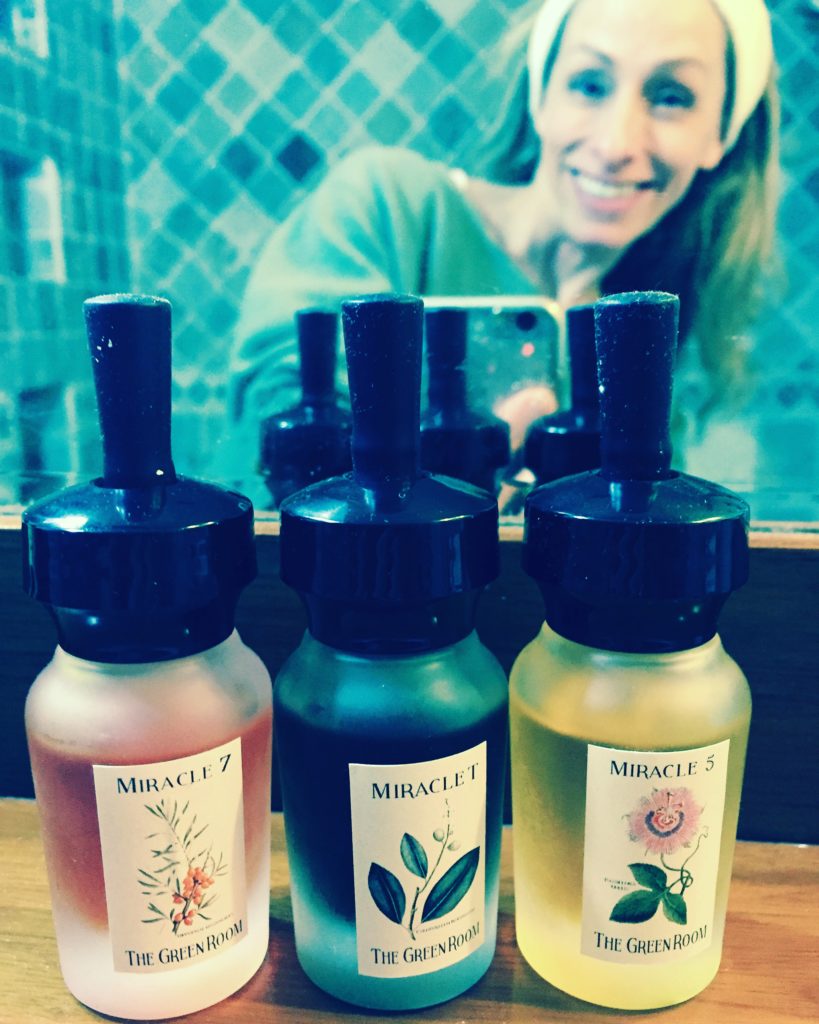 Back in 2016 you formed a cosmetics company called The Green Room along with two other women. Could you talk about the inspiration for the company and your products?

My best friend Astra Holmes [another woman in the WWAM community] started mixing up organic, vegan serums for her face. As any good best friend would do, she shared it. I was quite shocked with the results. Beijing has such an arid climate and every autumn my skin would shrivel and dry. This serum, Miracle 5, was the only thing that has ever been able to maintain moisture in my skin. It’s because she carefully chose high quality oils that wonderfully influence the skin. She and I decided after giving the serums to friends with fab feedback that we would embark together on enjoyable journey. The Green Room Skincare company was born. Our second anniversary is Women’s Day (March 8). We now have a growing line of all-natural serums for face, hair and body all which give visible results. One of my favorite products after the face serums is our Face Balm Cleanser, a divinely scented mixture of oils that cleanses the face (and removes makeup) SUPER easily. I give myself a 2-10 minute facial every day because of Face Balm.

What has it been like running the business in China?

You must wear all the hats in the beginning. Persist and love what you’re doing. Guanxi is everything. 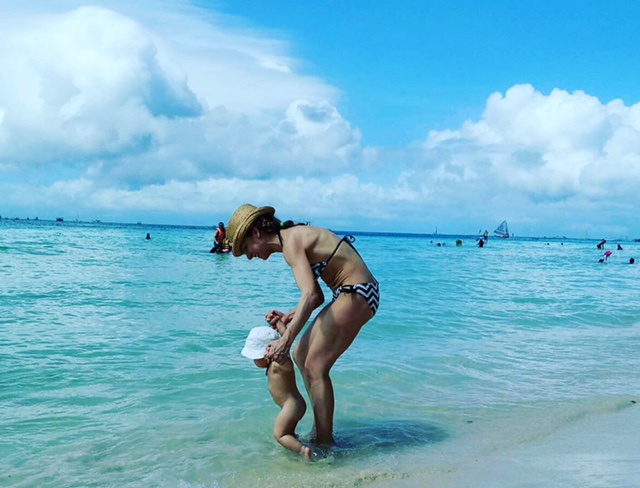 You also teach yoga classes at a studio in Beijing. Could you tell us how that began, and what you enjoy about leading classes?

I started with The Yoga Yard in 2002. I’d practiced on and off from 1997, but it was YY that made me want to study the practice of teaching yoga. It made me feel so good. In 2004, I attended a Teacher Training with Matthew Cohen. Brilliant. Started practice teaching on my friends. In 2006, began teaching at YY.

I have loved teaching at The Yoga Yard on Gongtibeilu for a decade. It’s a great community. I love teaching yoga, but at the moment I am only teaching once a week privately to a group. My time has been so limited that I have had to make priorities and sometimes cut out even things that I love…a new mother is always looking for cracks in time to nap. 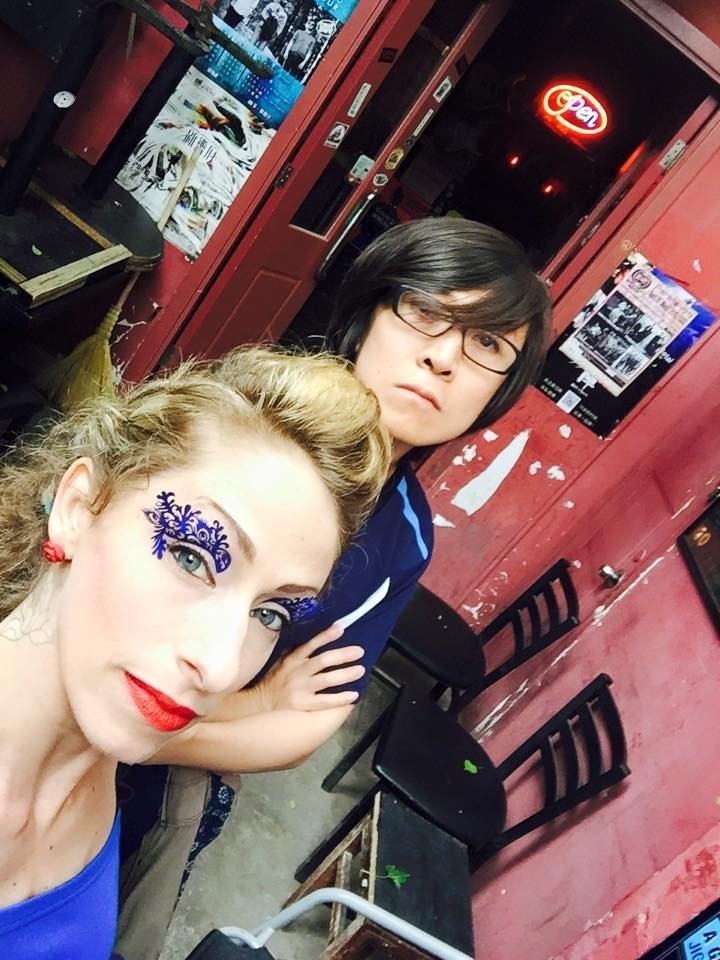 Hmm, this is an interesting question. I think that BOTH the people in the relationship need to be open and want to understand each other’s point of view. I’ve only recently understood the spoiled one-child point of view that my husband shows me on a regular basis. I think it is very common in his generation to be ill-equipped with life skills and socially awkward because their every whim has been fulfilled and no great suffering has been met in their lives. The grandparents and parents had hard times and so their only grandchild/child must be treated well. After I had my first daughter, I would often see in the outdoor community the absolute cater-to service from their Chinese caregivers.. I’ve only recently put two and two together that my husband was handicapped by being showered with anything he ever wanted and looked after in such a way that he doesn’t even know how to clean up after himself, or have any kind of schedule to his day. Now that I can fully understand this, I have cleared a lot of resentment, but I am having to teach him life skills that he never learned. This is tough. I don’t think that all Chinese men are this way, but the MAJORITY of my friends’ husbands in some way or another, demonstrate many similar spoiled privileged male syndrome habits.

An example: In Western culture, we thank each other often. It’s like the tail end of a sentence for us. But Chinese, they don’t thank each other often. There is always gratitude, but it’s not spoken so much. Today I asked my husband to look after our waking 10 month old while I taught a lesson. I finished with, “Thank you.” The student told me, “I really don’t understand why you are thanking him. Chinese people don’t say thanks to their most intimate people.” If you’re going to go cross-cultural, make sure you don’t apply your upbringing with another’s. Don’t assume. Ask questions. Don’t bracket behavior into stereotypes either (although good lord, they do exist), but individualize it so the problem can be seen logically.

For me, my husband doesn’t know my mother language and I feel that he had better learn it. This is all part of understanding someone else’s origins. He was never looking to marry a foreigner; we connected through music, a different language entirely. Even though we may not see eye to eye in life skills, we are very fortunate to have a deep place together in music. We do make good music together!

A big thanks to Jess Meider for this interview! You can purchase her music on iTunes and Amazon.com, follow her on Youtube and Facebook, and learn more about her at Jessmeider.com. Visit www.thegreenroom.co to learn more about the all-natural oils and serums produced by The Green Room Skincare company. 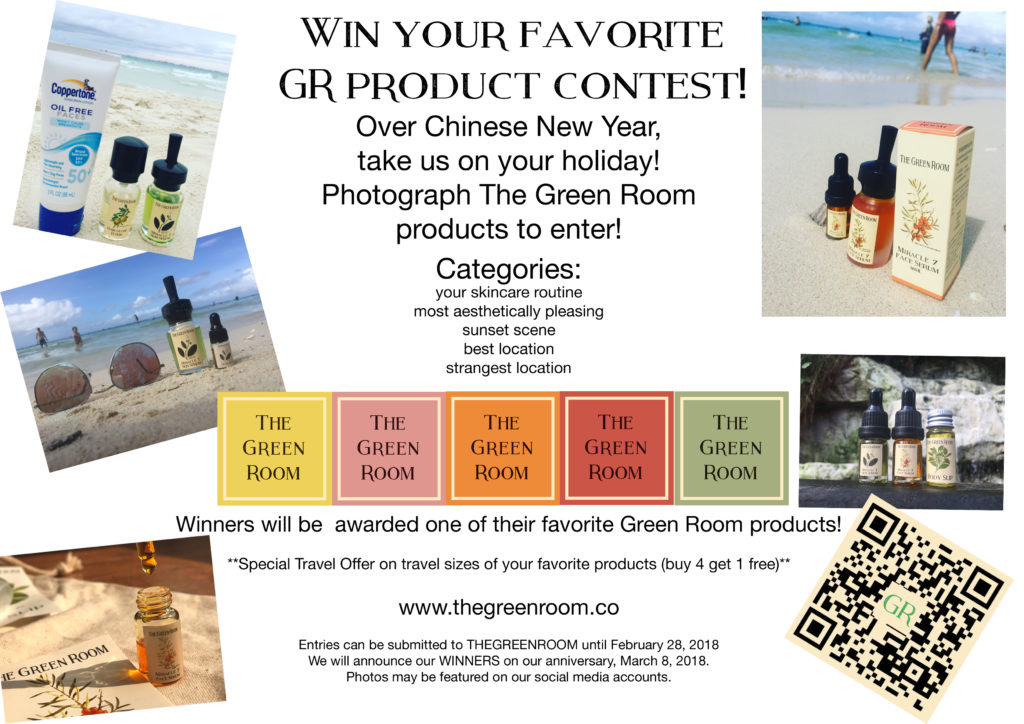 Are you a part of the WWAM (Western women & Asian men) community? Would you like to be featured as our WWAM of the month? We’re always on the lookout for outstanding women and men to feature in this column. If you’d like us to spotlight you through an interview, send us an e-mail at [email protected]