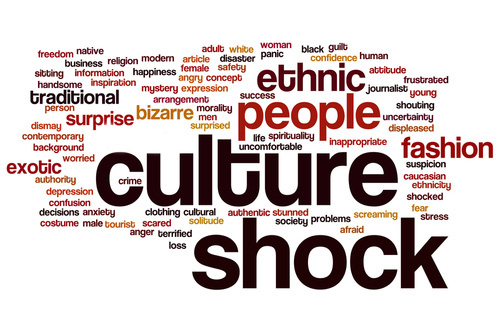 I didn’t believe in reverse culture shock until I experienced it for myself.

Everyone knows about culture shock — that disorientation you feel when adjusting to a new country, way of life, or culture. But what many fail to mention is that the experience of returning to your old way of life is just as jarring as leaving it in the first place.

When I moved to Beijing from the US just after college, it was extremely difficult to adjust. I found myself questioning everything and comparing it to America. Why did people spit on the sidewalk? How did they eat this food every day for three meals a day? Didn’t they want to get a suntan instead of covering up with long sleeves or an umbrella? Why do they keep staring at me? Why doesn’t anyone line up?

One particularly memorable experience was when the friend I was staying with – the ONLY person I knew when I got to Beijing and who had graciously offered to let me stay at his place – bought a bunch of Chinese breakfast dishes for us to eat at home. At this point I’d been in China a couple weeks, and I was getting sick of the food. The flavor was different and too strong compared to what I was used to eating, and I missed the more bland and cold food I enjoyed in America – cereal for breakfast, salads and sandwiches, cheese, the list goes on. But how could I refuse the meal, when I was already burdening him so much by staying there? I fought not to cry through nearly the whole breakfast, eating only as much as necessary to be polite.

For my first three or four months in Beijing, there were many days filled with tears, homesickness, and loneliness. I longed for things from home, things that were familiar — Western food, clean air, less crowded streets, less noise, Western bathrooms. But as I slowly accepted and adjusted to the culture and the lifestyle, I spent fewer days crying and more time enjoying the experience. Of course I still had bad days where I wanted to leave, and I missed a lot of things from America. But I was able to find alternatives if really needed.

After two and a half years in Beijing, I moved back to the US. That may not seem like a long time, but when the differences between the two places are so stark and when you really immerse yourself in the new country, it’s a big deal. I thought it would be easy to get back into the swing of things in America, because it was home after all. But it was harder than expected.

I felt stuck between two places, as if I didn’t fully belong in either country at that point. When I was in China, I often wondered why people did things a certain way. But when I returned to America, I found myself asking the same question about life there.

The first time I went out to eat after returning to the US, I almost forgot to leave a tip. I had paid the bill and was about to sign the receipt, when I suddenly remembered, oh, you need to leave a tip!

That wasn’t the only time I realized I’d forgotten something about the way of life in America. When I went shopping, I wondered why everyone was so nice to me and smiled and asked how I was or told me to have a good day when I checked out. In China, they would usually aggressively try to sell me things and follow me around the shop asking if I liked this item or that.

People in the US were just all-around friendlier than I was used to in China – whether that was while shopping or just walking around my neighborhood. When I went for my runs, other runners would wave to me – a concept I had all but forgotten while living in China – where people stared at me like I was crazy when they saw me out for a jog.

Another thing I found hard to adjust to was public toilets. I never thought I’d actually miss squatty potties. But once back in the US, I found sitting on public toilets dirty and wished there were squat toilets instead. And speaking of bathrooms, I forgot what it was like to have toilet paper and soap provided – something missing from most restrooms in China.

When I lived in Beijing, I adopted many of the mannerisms, habits, and ways of thinking – eating family-style, pushing to get myself onto a crowded subway, using an umbrella to block the sun, paying for meals when out with friends, and I’m embarrassed to say, even cutting in line.

When in the US, some of those things carried over — like communal eating, using chopsticks, and carrying around bathroom tissues.

But other habits fell away and were quickly replaced with more American behavior. I welcomed the cleaner air and the personal space I had once again. And I was glad there was no spitting or smoking in public places. After a few months, I readjusted to my American life.

But now that I’m back in Beijing, it’s hard for me to imagine ever living in the US again. Part of it is the fear of having to adjust back to the culture, part of it is the dread of moving all my belongings across the world again. And part of it is that I love China, my life here, and the opportunities and experiences. Despite the culture shock and reverse culture shock, both countries are a part of me now, and I’m so fortunate to call them both home.