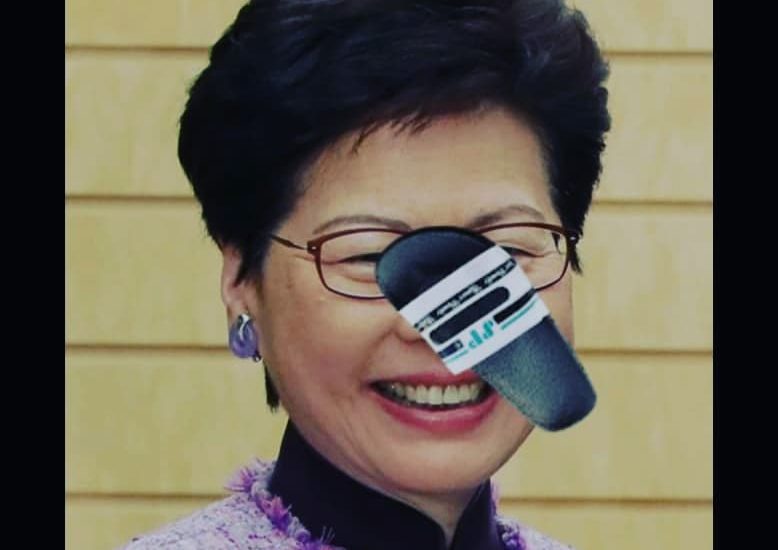 In Hong Kong social media, an image recently circulated of Hong Kong’s Chief Executive, Carrie Lam Cheng Yuet-Ngor, with a shoe suspended over her face. Every time someone tapped the image, the shoe appeared to strike her, and each tap added to a tally that was up to two million when I first saw the image. While it might be evident that figuratively whacking a politician with a shoe is an outlet for frustration and an expression of disapproval, the joke goes deeper for those who get the reference to Hong Kong folklore.

First, there’s the frustration. Hong Kong’s recent upsurge of covid cases caught everyone by surprise We went from having zero cases to having the top death rate in the world, mostly among the unvaccinated elderly in care facilities. The actions of the government were, in many people’s minds, vacillating and misguided. The public had grown increasingly more confused and frustrated by shifting quarantine rules, flight bans, and social restrictions. They had questions to which there were no satisfying answers. Why were vaccine rates so low? Why could we go out for lunch but not dinner? What difference did it make if people sat at the same table or leaned across between them? If we had more infections than the US and Canada, why were their flights banned from entering Hong Kong? If students had to be vaccinated, why couldn’t classes meet? Would life ever get back to normal?

Hong Kong had already seen an exodus of residents after the new national security law went into place. Now international businesses were (still are) threatening to pull out. When the CE announced that as of April 1, we will be seeing hotel quarantines reduced and flight bans lifted—all contingent on how the virus behaves—she said it had come to her attention that people were getting impatient with the restrictions. The public said Really? You just noticed?  Or in Cantonese Chi sin! which literally means glued wires or crazy.

OK, now to the folklore. Broadly speaking, folklore is unofficial knowledge passed on through unofficial channels, like your grandmother or your small community. Beliefs, rituals, games, recipes, handicrafts, rumors, legends, folktales, and customs are all forms of folklore through which families and communities make meaning. The function of much folklore is to draw communities together while other kinds attempt to influence over-powering forces. Magic beliefs, for instance, call on the supernatural when the natural world is out of control. You can see this in action in any Chinese temple where believers burn incense and paper as they petition the gods to intervene in anything from exams to cancer.

Much folklore is simply custom. Every holiday in Hong Kong is accompanied by folklore in the form of foods, music, offerings, greetings, etc. Customs change over time, and the pandemic has made it difficult to continue with certain practices. For example, next week is Qing Ming, but my husband’s family postponed the annual family gathering and grave cleaning. As people stay home and life goes online, so does folklore.

The shoe in the Carrie Lam meme is a clever reference to a ritual called “Beating the Little People” that is still performed in the margins of an upscale shopping district in Hong Kong. Here is how I described this ritual in my memoir Rabbit in the Moon:

We sit. Between her and us is a mat with the tools of her trade:
buckets of sand, bundles of incense, a group of paper tigers, a red
plastic bowl of raw rice, ceramic figures of Guanyin and the Monkey
King, stacks of paper fortunes, and bowls of amulets. When Fred
asks if I may take pictures, she nods again without looking at me.
The woman asks Fred his name and comments that his parents
did well to name him Long River. Lighting incense, she asks him
to bow to the deities, so he bobs his head to Guanyin and the
Monkey King. She then hands him two pieces of paper — one
with a figure of a woman on it and one inscribed with Chinese
characters — and tells him to write the name of the person bothering
him on the papers. When he finishes, she takes the papers
in one hand and circles them around his head a few times while
she chants. Next, she places the papers on a low wooden platform
and picks up a detached shoe sole. With a vigor that startles both
Fred and me, she beats the pieces of paper with the shoe sole
until they are shredded. Thwack! Thwack! Thwack! With each lift
of her arm, she tells the evil spirits what she is doing to them: “I
am hitting you! I am telling you to go away! I am beating you! I
am telling you to leave!”

She ignites the tatters with a lighter, fanning the smoke toward
the paper tigers near her feet. “The tiger is eating you!” Discarding
the burning paper into a large tin can, she draws out some paper
fortunes, which she also lights, waving the smoke over Fred several
times to cleanse him of evil spirits. She tosses several handfuls
of raw rice toward the paper tigers. Finally, she throws the traditional
divining tool — two comma-shaped pieces of wood that fit
together on their flat sides. They fall one up and one down on the
mat, a positive yes that the cleansing was successful.

In case the practice of beating the little people sounds too personal and invokes trepidation about bad karma (it did for me), here is how it was explained to me. The little people are malicious spirits. Rather than whacking the person you feel has harmed you, it is the spirits that cause that person to perform harmful actions being obliterated by the shoe. Seen this way, the person who hires the ritualist (or taps the screen) is enabling a sort of exorcism.

Not all folklore is harmless or entirely unofficial. Under the scary uncertainty of a pandemic, rumors and conspiracy theories are as infectious as the virus. They circulate by word of mouth and on social media. They spread fear and keep people from getting vaccinated. They can lead people to use medications that are ineffectual or dangerous. Sometimes officials become mouthpieces for this kind of folklore, as in the former US president touting dangerous covid remedies disproved by science. “Fake news” might start out as folklore and become official, or it could travel in the opposite direction.

Sometimes folklore vs. official culture is all about perception. The Hong Kong government has just announced that it will distribute kits containing antigen tests and boxes of Chinese traditional medicine donated by the Chinese mainland. The traditional medicine in question has been discounted by Singapore and the US as having unsubstantiated benefits. How it is received by Hong Kong residents will depend on how much individuals trust both traditional medicine and the government. Much of that trust will be shaped by what is said behind the scenes in unofficial settings. In other words, by folklore.