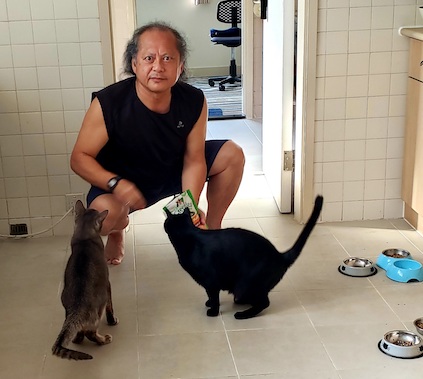 Fred, my Chinese husband and everyone’s favorite uncle, never wanted children and never considered having a pet. He is by nature a free-roaming musician and scholar who loves his independence. Lucky for him, by the time we found each other, my daughter was off on her own, and I was past childbearing years. What he didn’t count on was that I am incapable of living without cats. What I didn’t count on was the extent to which loving a pet would become another cross-cultural learning experience in our relationship.

I’m the daughter of a veterinarian. I grew up in the suburban US with the constant presence of at least two cats and two dogs in a house with a yard. Over the years, we also had chinchillas, a goose named Matilda, gerbils, an iguana, and parakeets. I hung out in my father’s clinic, and we inherited animals that might otherwise have been abandoned.

Fred grew up on the island of Cheung Chau in a village house filled to the brim with extended family. He remembers that his grandmother had a cat she spoiled and that others tolerated for its skills as a mouser. Fred didn’t dislike animals so much as he was indifferent to them. I, on the other hand, like them better than I do most people. Fred got mixed messages about animal love in his family. When I met his family, they had two mixed-breed dogs who lived in a cardboard shelter in the courtyard. The dogs ate leftovers, mostly scraps and rice. My father-in-law spoke gently to them. My mother-in-law yelled at them. Fred’s youngest aunt and uncle, who live downstairs, had a golden retriever who lived indoors and ate dog food. The dogs the family has now live outdoors, but they have been upgraded to the kibble and walks they enjoyed with their former owners, Australian ex-pats who had to leave Hong Kong.

I had five cats when Fred and I met, down from a full house of seven. We met in Hawaii, on neutral ground, but when he visited me in Texas, one of my cats took him for an intruder and attacked him. He was not amused, and I was enough in love to laugh off his lack of animal empathy. Then we both moved to Hawaii, and I had to rehome my cats. For at least a year, I teared up in the pet food aisles of grocery stores, keeping my sadness to myself because I knew he didn’t understand.

During our first ten years in Hawaii, we lived in faculty housing where there were swarms of noisy children, but pets were not allowed. This seemed unfair to me. Without the bedlam of children playing under our windows, I could have written my dissertation without noise-blocking headphones. In the company of cats, I could have done it with more composure.

I adopted our first cat while Fred was away at a conference. I’d broached the subject after we moved to a pet-friendly building. I’d heard from a friend that the local SPCA invited visitors to become “cat socializers.” I went there to pet the cats and meant to wait until Fred returned, but I’m a sucker for a pretty feline face. I came home the same day with a year-old, part Abyssinian that I named Tashi. All long legs, huge ears, and green-gold eyes, he was a work of art. His blue-gray coat and tawny belly fur reminded me of a gray squirrel. Fearless and self-contained, Tashi was aloof unless there were geckos in the vicinity. Those he could stare at with rapt attention for hours before biting off their tails if they came too close. We referred to him as “the monk.”

Once resigned to sharing me and our space with a cat, Fred watched Tashi attentively and barraged me with questions. Why does he sleep so much? Why does he eat like that? Why does he dig in the litter box? Doesn’t it hurt when you play with him like that? What does it mean when his tail is twitching? What do they see when they stare? He asked how I knew how to handle a cat and why I talked to him like he was a person. I taught Fred how to stroke Tashi in the direction of his fur, behind his ears, and under his chin. I remembered my mother teaching me and my siblings what cats like and don’t like and realized not everyone gets this instruction.

I adopted our second cat, Clio, six months later and during another conference. Fred was off-island, and I was helping a friend who was moving and about to return her black kitten to the SPCA. The kitten had been bringing me toys all afternoon. I caved to peer pressure and feline persuasion. Fred sighed deeply when he came home. He knew there was no turning back. Before long, I was saying it was a good thing we hadn’t had children because I had cat limits, and he had none. Without my intervention, they could charm him into unlimited treats, faucets left on, midnight petting frenzies, and ever earlier morning meals.

The cats were no longer kittens when Fred got a job in Hong Kong, and there was no question about taking the cats with us. Fred moved first, and we spent a whopping amount of money to hire a pet shipping company and fly them from Honolulu to Hong Kong via Japan while I stayed behind to sort out our belongings and sell our condo. Three months later, I arrived in Hong Kong to find that Fred and the cats had managed quite well. When I left for five months the following year to attend to a family illness, the boys bonded for good. Tashi only had eyes for Fred. In fact, he preferred men in general. When male students and workmen came to our flat, he swished and preened around their legs shamelessly. Tashi head-butted Fred the second he walked in the door. Fred had a special voice he used only for Tashi. It is possible I was a bit jealous of them both.

Hong Kong has changed drastically since Fred left in the 1980s, and veterinary clinics and pet stores have proliferated in certain districts. When Fred points out that pet ownership is a sign of class and wealth, I remember the astonishment expressed by my immigrant students from poor countries over American stores devoted entirely to pet food and accessories. Of course, farmers have always had working animals, but in colonial Hong Kong, it was primarily the European elite who owned pets. Now, in Hong Kong’s upscale neighborhoods, locals can be seen walking, carrying, or pushing (in doggy strollers) purebred dogs. We see Poodles, Pomeranians, Shelties, Collies, French Bulldogs, and Welsh Corgies, along with an abundance of Japanese dogs like the Akito Inu, with their intelligent eyes and tightly coiled tails. Last week we encountered a Grand Pyrenees and a rare turtle being walked along Tolo Harbor. This in a city where many flats are 300 to 500 feet square.

According to what we have heard, the demand for name-brand animals extends to cats and supports unregulated catteries that supply sought-after breeds, like British Shorthairs, for less than their cost from licensed breeders. If rescue animals are catching on, they are not on display.

There are exceptions. One of my favorite features of the few traditional markets left in Hong Kong is shop cats. These cats sun themselves on top of merchandise, sprawl in shop windows, and bathe in doorways. They expect you to step over and around them. They are used to being photographed and cooed over by tourists and local cat admirers but make no mistake. These are working cats who guard the shops against rodents. Now that he has acquired cat awareness, Fred spots shop cats and strikes up conversations with their shopkeepers. In Taipo, we regularly return to a sundries shop with three generations of mixed Siamese cats.

Two weeks ago, we lost Tashi to lymphoma and renal failure. His diagnosis came soon after I traveled to the US for a two-month stay, and I learned about it over the phone and through Fred’s sobs. Faced with the choice to let the disease run its course and expensive treatment, Fred was adamant he would pay whatever it took. When I returned to Hong Kong, I had a three-week hotel quarantine before I could come home. Meanwhile, Fred toted Tashi to and from chemo treatments, syringe fed him daily with the help of a grad student, stocked up on every kind of cat treat he could find, and got up at all hours to urge him to eat. He kept Tashi alive long enough for me to see him for three weeks.

The day Tashi died, the home vet administered the lethal dose of painkillers that ended Tashi’s suffering. I’ve said goodbye to a lot of cats over the years, but this was was Fred’s first time, and he was bereft. We sat on the floor next to his body and cried. Two hours later, a representative of a pet cremation company called TLC arrived. The young man gently lifted what was left of our emaciated cat into a fabric-covered box and wrapped him in a towel before closing the lid. He asked if we would attend the service, and we shook our heads. I’d never heard of a service for pets. I had buried pets but never before had a pet cremated.

A few days later, Fred got a WhatsApp message from TLC with a video of the cremation. I lifted my hand up in protest when he held up the phone, but I saw enough—a white satin pillowcase with one side turned down to reveal our cat, the door of the chamber being closed, a dusting of ash and a few bones when it reopened. My American friends were aghast that this process would be taped and shared. I found it all vaguely Buddhist. A week later, the same young man delivered Tashi’s ashes in the white ceramic urn that now sits on my Kuanyin altar. We got a thoughtful sympathy note from the cancer clinic.

Is the relationship between people and animals nature or culture? Fred, who grew up disconnected from animals, says Tashi taught him a lot about love. Loving a man who has learned to love cats taught me new things about culture—his and mine. Culture might shape our ideas about animals, but love, as those of us in cross-cultural relationships already know, transcends culture. Speaking of Buddhism, poet Jane Hirshfield wrote, “Zen pretty much comes down to three things—everything changes; everything is connected; pay attention.” Tashi, our Zen master cat would have agreed. Clio, default queen of the house (and furniture shredder extraordinaire), just wonders why it takes people so long to figure out what cats already know.