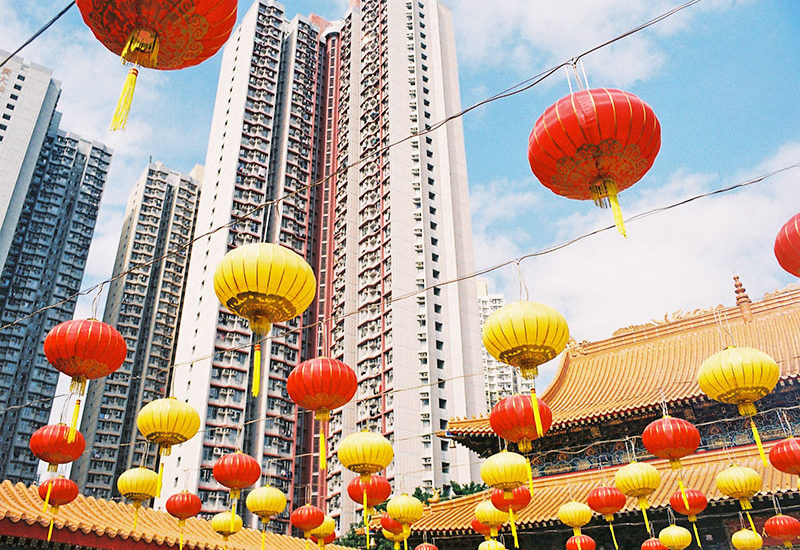 The Legend Behind Spring Festival

Once every year, a hungry monster called Nian (年) would make its way from the depths of the sea, where it lives, to a nearby village, eating people and livestock on its way. People were living in fear of this monster that had the head of a lion and the body of a bull. While all villagers went into hiding in the nearby mountains one year, an old beggar passing by the village stayed to fight against the monster. He knew a way to get rid of this monster forever. He put red paper on the door and windows of the place he was staying at and burned bamboo sticks, the burning of which would make loud cracking noises. Afraid of the color red and the nerve-racking noise, Nian would flee back into the sea, never to return again. The beggar was a deity and legend has it that since that very day, Spring Festival (aka Chinese New Year) is celebrated on the first day of the first month in the Chinese Lunar Calendar all across China and some of her borders. As a Western woman married to a Chinese man, I celebrate Chinese New Year with my husband and the Chinese side of our family every year. We usually celebrate at his parents’ house–my father-in-law will take his grandson, my son, out to buy decorations–couplets (对联) and a picture with the character for happiness (福字) among others. We put them up on the door the eve before Spring Festival. We will make jiaozi (饺子), steamed dumplings stuffed with pork and ginger, together, and everyone will laugh at my embarrassingly bad stuffing skills. We’ll eat them in the evening together with a few other dishes, watch the TV gala, and since we have small kids, I’m in bed early trying to comfort them. Although tired, they usually can’t sleep well because of the ear-piercing noise you’ll hear from the firecrackers outside. There are many more legends and traditions on this special holiday, here are 6 accounts of how Western women celebrate Spring Festival with (or without) their Chinese husbands:

Laura from Our Chinese Wedding  – Inner Mongolian Spring Festival: Lots of Lamb And A Family Of Strong Women

A lot of our Chinese New Year celebration is spent fairly similarly to other parts of the country. Of course, there’s no missing the annual Gala, mainly out of a curiosity to see whether it will be even worse than the previous year. There’s an endless flow of dumplings being served up, however in typical Inner Mongolian fashion they’re filled with lamb meat rather than pork. The numerous family lunches and dinners over the holidays are also characterised by sizeable helpings of lamb prepared in all ways imaginable. Thanks goodness I’m a fan!

The may way in which our Spring Festival is atypical is the fact that my husband grew up mainly with his mother and her family’s side, after his parents divorced. This means that rather than visit his father’s family on the first day of the New Year and his mother’s relatives on the second, we do it the other way round. And so we go to see his paternal grandma with all his female family members. At the same time, on the first day of Chinese New Year most of his female relatives on Mum’s side still show up at their mother’s house, rather than their parents-in-law. Truly a family of strong women!

I’ve often joked to friends that my favorite restaurant in China is my mother-in-law’s kitchen, nestled in the mountainous countryside of rural Hangzhou. Well, when Chinese New Year rolls around, there’s nothing quite like the delectable homemade foods that come straight from her wood-fired wok.

A favorite is migu, these scrumptious turnovers made from rice-flour dough that are stuffed with either veggies (salted bamboo, pickled greens and tofu) or veggies and pork. Preparing them becomes a true family affair. We’ll all crowd around a table and create our own tiny assembly line, with someone rolling out circles of dough and others spooning filling in and sealing them before handing them off to my mother-in-law in the kitchen. There, she either steams them or, my personal favorite, fries them. We prepare tons of extra turnovers and refrigerate or freeze them; later they become fast and delicious snacks during the new year. 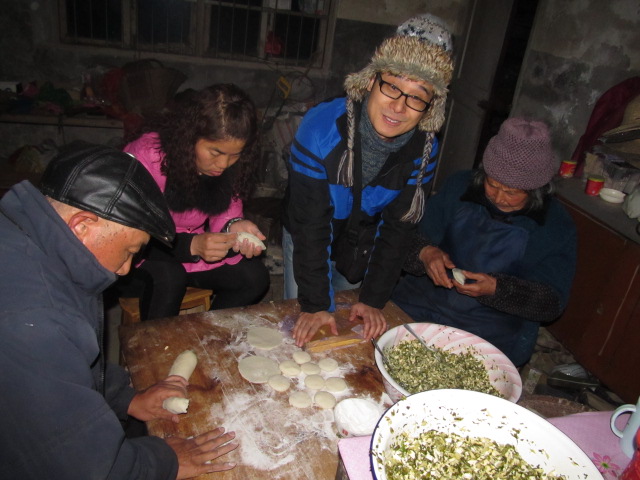 My mother-in-law also whips up a generous batch of crispy rice treats called dongmitang. They’re like a Chinese version of rice crispy treats, but more natural and without the marshmallows. Dongmitang are wonderful for snacking on those lazy afternoons or late nights during the new year (including when you’re watching that Spring Festival Gala and get the munchies).

As a vegan who loves all things bean curd, I especially look forward to my mother-in-law’s homemade tofu for the new year. I never truly understood the stuff until I wandered into her steam-filled kitchen and watched her prepare it from scratch. It’s quite a process – one I’ve yet to master – but I do know one thing. You truly haven’t lived until you’ve tasted homemade fried tofu straight from the wok, dipped in soy sauce. Yum!

Spring festival always presents me, a single woman living in China, with a difficult choice: where to go? If I stay in China and travel I have to deal with a billion other people all of whom want the same train ticket and hotel room as I. If I travel outside of the country, I run into the same problem, only with organized tour groups. If I stay home, I need to prepare at least 3-days of goods as all the shops, stores, restaurants and food stalls disappear for a week. If I go to a friend’s village to spend it with their family, I am paraded around, gawked at, and forced to eat some pretty funky stuff cooked by grandma.

So last year my foreign friends and I threw up our hands and said “F- it” to this impossible choice. We found an open KFC, bought an obscene amount of fried chicken, soda and junk food, wore comfy clothes, went to someone’s apartment and played board games all night. 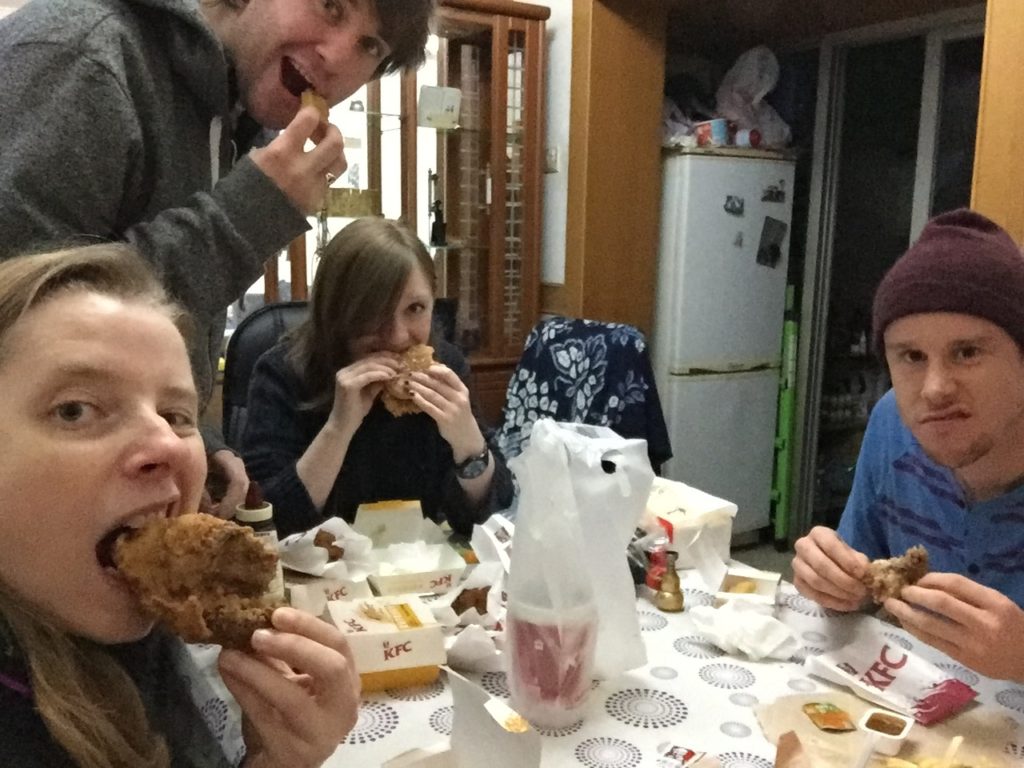 There was no pressure, no traditions to follow, no strange food to eat, fireworks to watch or language to interpret. Sometimes when u live in a foreign culture you want to get heavily involved and do as the locals do. But sometimes you don’t. We could just “check out” of the holiday and we did just that. And it was perfect.

I spent last Chinese New Year with my then boyfriend’s family for the first time. They have a small family and live in Beijing, so we don’t have to travel. Plus, once the festivities are over, Beijing is quite empty with many people going back to their hometown, leaving us “Beijingers” and the remaining fireworks enthusiasts to amuse ourselves.

In the last year, we got married and had a baby, and since the new year is one of the most important family times in China, it’s essential to spend it together. I’m really looking forward to celebrating it with our daughter for the first time. My husband’s family makes Northern China’s traditional jiaozi (dumplings) together, and while the tradition is to wait until just after midnight to eat them, luckily they don’t let tradition stop us from digging in early. They usually watch the Chinese New Year gala and have lots of food and snacks. We’ll play some card games and at midnight they’ll set off a few fireworks for good luck in the coming year. It’s a really warm, relaxed family occasion.

My husband comes from a mountain village in Gansu province where the new year festivities are yet to be diluted by health and safety inspectors. The most spectacular of which is the shehuo (社火, festive activity) where each mountain hamlet takes part in the float parade competition.

In the photo those are real children perched on a small metal ledge and their body bound by rope to the pole. Before you shout child cruelty! I must tell you that the village children dream of being picked. My husband’s childhood regret is not making the cut. For several hours before the float parade they can’t eat or drink as once they are fixed in position they will remain there for the best part of the day. Another highlight in the village is killing the family pig. A month of plain noodles and potato soup turned me into a ‘are we there yet’ child, repeatedly asking how many days till we kill the pig? There is no waste, the fat becomes pork lard, the meat preserved, the intestines hung out on the washing line, and the head plucked clean. Finally, if you want to feel included in family and friend gatherings, I recommend learning Chinese card games – Sheng Ji and Dou Di Zhu.

Marissa from Xiananigans on the Prairie – Celebrating CNY in the U.S.

My husband, who’s from the Shaanxi countryside northeast of Xi’an, and I live in the U.S., thousands of miles from the nearest Chinatown. We can’t embrace all the ways we once celebrated Spring Festival with my in-laws when we resided in Xi’an. Thus, we’ve adapted the traditions surrounding Spring Festival for our low-key version of CNY.

We’ll make dumplings, even coin-shaped ones, fish, hang couplets, and reinvent other traditions: send hongbao (红包, red envelopes with cash) over WeChat, partake in virtual bainian (拜年, pay a New Year call), and possibly set off firecrackers, if we can get our hands on some.

Life at this time of year passes by uneventfully for Americans, most who may not even know that 1.3 billion people are massively migrating to rural areas to reunite with family. It’s also quiet as the country isn’t rocked by that same billion people lighting fireworks, firecrackers to usher in the Year of the Rooster.

Have you celebrated Chinese New Year before? We’d love to read about your experience in the comments’ section.