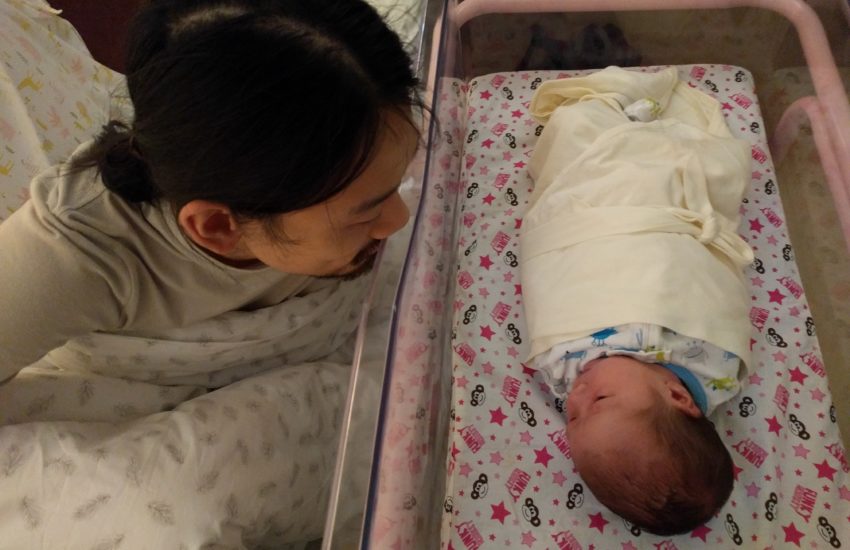 I’m not the kind of person who ever really pictured what my wedding would look like. But I did always have this idea in the back of my mind that if or when I had a baby, my partner would be there by my side to support me through it.

I suppose this image developed from the movies and tv shows I watched growing up, where the woman was usually squeezing the “poor suffering” man’s hand so hard that he was usually prompting comedic “how dare you?!” stares by complaining about how much pain he was in.

So when I got pregnant last year and found out that it was not common for husbands to be allowed in with their wives during labour and delivery in China, I knew I had to find a hospital which would allow it. I also had to make sure my husband was on board with the idea. I mean geez, I had to be there, so why shouldn’t he?!

Of course, this was only one of many cultural and medical differences I found during my pregnancy as a foreigner living in China. Another included the fact that in China, it’s currently illegal to find out the sex of your baby before it’s born (due to sex-selective abortions). Of course, there are ways to find out, but my husband and I both agreed we were happy with a surprise anyway.

A recent tragic case in Shaanxi also highlighted the fact that women labouring in Chinese hospitals must rely on their family to make their medical decisions for them (read more on BBC or Shanghaiist). It’s a scary concept considering that even if you are still able to communicate consent or make requests for certain treatments, your partner or their family could potentially overrule your decision. The case caused an uproar in China and has many people questioning why the law requires medical staff to gain permission from family members before performing major surgery.

One revelation from other foreign mothers living in China was that some hospitals do not provide epidurals and have limited other pain relief options. These are definitely things that are good to know in advance. But part of the problem may be that you don’t know what your own expectations are until you’re confronted with an urgent situation. Joining an expat mothers’ or expecting mothers’ group, either online, on WeChat or in person with other expats can really help to understand what you might be in for. I was lucky to join a WeChat group of supportive, open-minded WWAM mums and expecting mums. Having others going through the same thing, plus other experienced mothers who could help us put things in perspective helped me more than I could ever have hoped.

Another important aspect to consider is whether the hospital you will deliver at has a NICU (neo-natal intensive care unit) onsite, and what kind of access they allow if your baby has to be admitted. This is important such as for a premature birth or if your baby has some more common complications like swallowing fluid during birth, or jaundice, or more serious issues. Some hospitals in China do not allow parents to visit, touch or even see their baby in the NICU. That’s a scary prospect to be facing on top of health concerns about your baby, and as Felicity describes so well in her post on premature babies, is considered a long way from best practice and best possible outcomes for mother and baby during an already traumatic time.

Even when things go smoothly, pregnancy can be a vulnerable and overwhelming time, especially a first pregnancy where you’re not really sure what to expect. Dealing with all this as a foreigner in a different culture and potentially a different language can really add extra stress. Depending on your financial, insurance and personal situation, as well as the medical care available in your city, it’s always worth considering whether you should go back to your own country or go somewhere else at least for childbirth. It’s not an easy decision since it could be more costly to do so, with travel, potential accommodation costs plus medical costs. You’ll also have to consider how far ahead you’d need to travel since you cannot fly in the last few weeks of pregnancy. After the birth, you’d also need at least a few weeks to get the baby’s paperwork done to be able to return to China.

I was really lucky to have fairly good insurance by the time I got pregnant and found there were different options for hospitals of all levels here in Beijing. I also wasn’t keen to spend the last few weeks of pregnancy away from my husband, since he only gets 2 weeks’ paternity leave, and didn’t want to chance the baby coming early and him not being there to support me. So we found a hospital within our budget that could provide the things that were important to me.

I also talked to my husband well in advance of the birth about my own expectations, including that I didn’t want anyone to know when I went into labour. Initially, he found it strange to not tell his parents that the baby was on the way, but I explained that I needed him the most that day, and I didn’t want him to be distracted having to give updates to family and friends on the situation and potentially having to also check on his parents if they came to the hospital to wait. Besides, as I warned him, it can take a really long time for a baby to actually be born. And I figured that day was probably my last chance to make things all about me for some time! He finally understood my concerns and agreed, and his parents were also understanding about our plan.

Of course, the whole day of my daughter’s birth last year did not go exactly as planned (probably very few births ever do) and there are some things I would handle differently in hindsight. But that’s probably a whole other post. A day after being induced, and being constantly told “it’s gonna be a big baby” for the 24 hours I was in labour (thanks for the motivation!), our daughter was born and placed straight onto my chest as requested. It actually happened so quickly that no-one but me knew she was a girl, but finally, there was no more talk of a giant baby (she was just under 4kg), just a slimy, warm little bundle resting on my chest. It was an amazing feeling after such a long wait.

Have you given birth as a non-local in China or another Asian country and found it to be similar or different to your own expectations? Please share your experiences and advice.