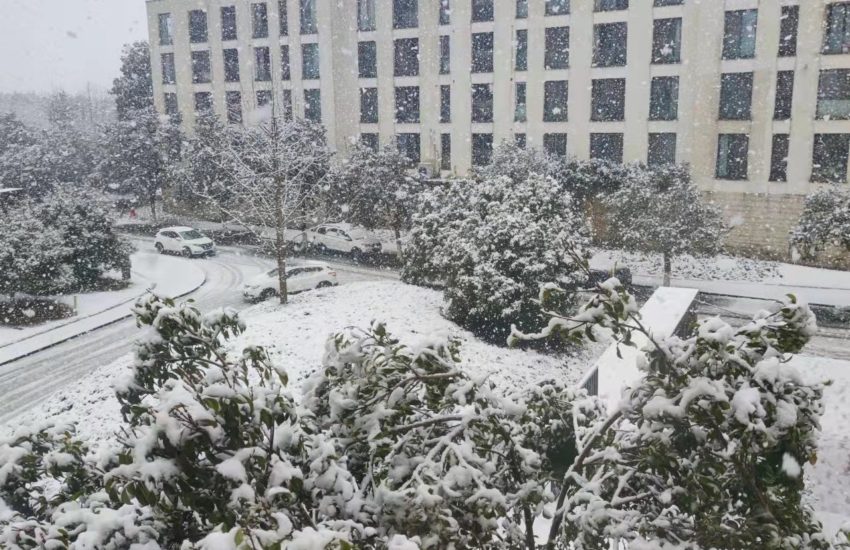 Yesterday, we awoke to a scene of white winter wonder:

A heavy “goose feather” snowfall had dusted the landscape outside our window, drawing my husband out of bed with a childlike thrill as he stood there, aiming to capture the magic of the moment in the lens of a camera.

Such a warm embrace of snow deep into February would surely find a chilly reception in my hometown of the Cleveland, Ohio area in the US. Not long ago, my parents complained of how well over a foot of the stuff, courtesy of a recent winter storm sweeping the country, had buried their yard and left them largely confined indoors. This was typical for Cleveland, where winter always sees at least one blizzard, as well as plenty of sub-zero temperatures (some dangerously low), iced up streets, and windshields frozen over in the morning.

Why does Chinese culture welcome a mantle of white in winter? According to the Beijinger, the expression ruì xuě zhào fēng nián “does not just embody a whimsical wish from ancient Chinese farmers for a good harvest but has scientific underpinnings: snow that arrives at this critical moment will kill the eggs and the larva of pests in waiting, and also provide water for the crops once the spring arrives.”

This reminded me of what my husband shared with me years before, when we hiked in the hills of his Zhejiang hometown among terraced fields of crops blanketed in snow. In response to my fear they wouldn’t survive, he said certain crops — such as rapeseed — were always planted in winter, and invariably thrived despite the occasional cold snap or snowfall.

Of course, the much milder subtropical climate of his hometown — which shares a latitude with Houston and New Orleans — makes this possible. Who could imagine, under a foot of snow or more, attempting to tend the fields in a bitterly cold January or February in northern Ohio?

Indeed, Jun spent his formative years in a world where the total days of snow in a season could usually be counted on one hand — leading people to await, not hate, this annual phenomenon.

Whatever your roots, there’s always the potential to find a little beauty — poetic or otherwise — in a winter snowfall. Just don’t expect most of my family and friends back in Ohio — those who don’t populate the ski slopes or ice rinks or toboggan chutes — to wax lyrical for you after being snowed in for days. 😉