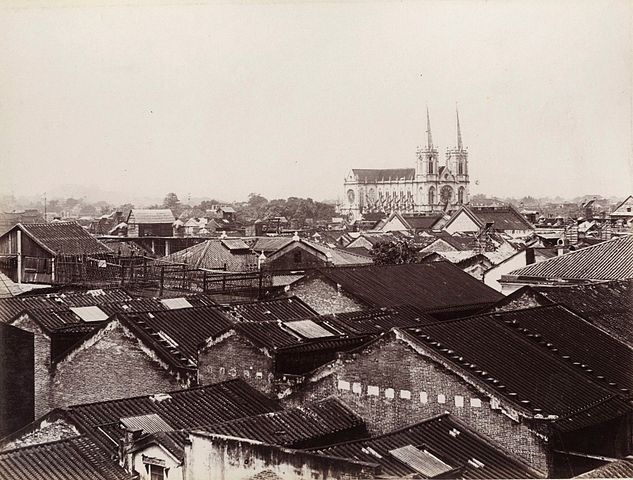 Today’s WWAM of the month is a lady whose story deserves a place outside of library special collections and thesis papers. From the limited eight lines on her Wikipedia page it is difficult to see just how remarkable this WWAM and her experience is. While WWAMs today are still not very common, Anna Sofie Jakobsen (1860-1913) was among the first Western women to fall in love with and marry a Chinese man.

Anna’s marriage has inspired several researchers to time travel through her past in an attempt to fill the gaps that are missing in the library collections. However, WWAM Bam (with the help of journalists, a film maker, historians, researchers, scholars, and the general public) has been able to piece together more of this challenging jigsaw puzzle. Today we can reveal that a writer is working together with Anna’s family and has found the ‘lost diary’ that many had hoped exists. She is currently piecing together the Cheng Family’s story and we will update you when we have further details on the book and its author.

Let’s take a look at Anna’s story, focusing on her, her determination to follow her heart, and the courage it took to ignore those who believed, “The heathens may find salvation in the Gospel, but they cannot enter the white man’s civilization on equal terms and most certainly cannot marry his women.“

Why was Anna in China?

Anna was one of the first Christian missionaries to travel to China from Norway. Once accepted by the China Inland Mission, Anna underwent an intensive 14 month training course in England in 1884, which included memorising the mandarin version of the bible. We may complain about our long-haul flights to China, but flying is a luxury compared to the steamer boats Anna endured. She and her friend Sophie Reuter’s voyage to Shanghai left London on the 18th of November 1885 and didn’t arrive until 8th of January 1886. Once in China, their destination was Ho-Chow in Shanxi province.

How did Anna meet Mr. Cheng?

Is Anna talking about her future husband here?

Shanxi Province in March 1987: “You cannot think how thankful I am that GOD sent me out to this heathen land. Last night we had a very blessed meeting. A Chinese Christian, who came up with Mr Stanley Smith gave his testimony to how GOD had led him. He is the first missionary the Hung-t’ung church has sent out. He is going to the south of the province. He is full of CHRIST; Mr Hsi (the Wade-Giles spelling of Xiu)  said that if he went he was sure to suffer but he answered, “I am not afraid. If the people will not receive me or hear the Gospel, it will be because the time has not yet come, but I believe it will soon come. I do not trust in men, but in the LORD. I have no money. I have a family at home, but I have left them for JESU’s sake. I do not know what will meet me, but the LORD knows, and He will help.” We received great blessings in seeing that man’s simple faith in GOD. Do pray for him. I am sure he will have suffering to go through.”

If this letter is about Anna’s first meeting with her husband, it does show a certain connection and admiration for him. A hope that he will be safe on his journey south.

How was News of their Marriage Received?

All marriage proposals within the China Inland Mission had to be approved by James Hudson Taylor. When Anna and Mr Cheng put forward their request it included the reason that having a Chinese husband would help spread the message of Christ to his compatriots. However, how much was out of genuine love and how much was coming from her missionary heart, may be a question that is answered in her ‘lost diary’.

The fact that Anna didn’t give up on her marriage proposal for seven whole years after it was rejected by Taylor is a reflection of true love mixed with the desire to be accepted by her own compatriots in the mission.

During these seven years of waiting for a change in the mission’s decision about her marriage, Anna worked tirelessly to spread the mission’s message of God. Her medical skills were of great help in gaining the respect of the locals who had at first been noted as being rather hostile. Taylor seems to forget the past dislike for Anna’s previous marriage proposal and again continues to admire her work (taken from a quote in Jette Bonnevie’s research files):

“To a woman had been given success in the difficult and dangerous task of effecting a settled residence in Hunan, so long the most anti-foreign province in China. In 1897, with a single native helper and a Chinese woman-companion she had walked quietly over the border from Kiang-si, under the very eyes of soldiery sent to guard the frontier but who never dreamed of connecting those dusty wayfarers with the dreaded foreigner they were to intercept.”

One year later, however, Anna decided she had waited long enough. She was 38 years old and she didn’t want to wait for permission from the mission any longer. It wasn’t only Taylor who objected to her marriage to a Chinese man, but Anna also received warnings from her friend Elizabeth Rasmussen (taken from a quote in Jette Bonnevie’s research files):

“I have spoken with your mother…and she is very worried. You must understand, dear Anna, that what you are about to do seems totally meaningless and incomprehensible to people in this town and county. Yes, one sailor or another has returned home with an Asian or African woman, a mulatto or mestizo or even a woman with Red Indian blood. But as far as I know it has never happened that a girl from Kristiansand has married a yellow or a black man – and brought him back home.”

On learning about Anna’s decision on marriage, Taylor wrote to Anna in reply to her resignation from the China Inland Mission. A copy of this letter can be found in the SOAS library Special Collections section and it has been shown in the thesis of Marte Drønen Lægreid titled, “Missions, Families and the Life Course of Anna Sofie Jakobsen Cheng (1860-1911)“:

Thanks for your kind letter of July 16.  You do not know how much you have distressed us, and injured the C. I. M., and, indeed, the whole Mission cause in China.  I do not know of any blow Missions in China have had, during the last thirty years, that is nearly so serious. However, I have already put this matter fully before you, and, as you think so little of the judgment of 99 out of 200 of all the Protestant Missionaries in China, as well as of us, the leaders of the C. I. M., I suppose it is useless to write any further on this matter.  But I am sorry, that you did not remember your promise to give six months’ notice of leaving the Mission, or of the intended marriage, before proposing to have it celebrated.  That Dr. and Mrs. Edwards should, in any way, forward such a terrible mistake, is amazing to me!  If you are determined to persevere, I can do no other than accept your resignation, as you wish, as dating from July 16, the time mentioned in your letter; but I do trust Mr. Clapp and yourself have both seen that you could not be married, under present circumstances, at any rate.  You will be aware of the unanimous feeling of the members of the Sheo-yang Mission, excepting Dr Edwards, and of the feeling of the T’ai-tien Missionary community, that so great a wrong must not be perpetrated in any missionary building. That ought to have been sufficient, in itself, to make you hesitate; and I trust that you have hesitated, and, indeed, decided to give up a course that, whatever you may think of it, is such a cruel wrong to every single lady missionary in China, and is scarcely less wrong to all our native Christian young men.

We grieve more than I can tell you to lose you; and if you, absolutely and forever, give up all thought of this or any such marriage, we should be only too glad to cancel your resignation.  In the absence of your written statement to this effect, however, we shall consider it as absolute.

With more sorrow than I can well express,

From this letter, it can be seen without a doubt that the pressure against Anna and the impact of their ‘scandalous’ marriage was immense.

When considered in a historical context, however, the repudiation of Anna’s marriage was commonplace and expected during the late 1800s and early 1900s. The United States had anti-miscegenation laws in place since the late 1700s, making interracial marriages a crime, and they would pass the Expatriation Act in 1907, a law that revoked the citizenship of any American woman who married a foreign man. Hatred, not acceptance, prevails in the press accounts of the late 1800s about white women who dared to love Chinese men. At best, they were ridiculed and scorned; at worst, they were arrested for merely following their hearts.

Many questions still remain about Anna and Cheng Xiuqi’s marriage and little is known about Mary’s father. Perhaps we will find out more from Anna’s diary and her family’s memories when the book is published. However, there is a photo of the Cheng Family (in Marte Drønen Lægreid’s thesis) when they visited Norway during the Boxer Revolution. It appears that Anna’s handsome husband was accepted into the family and seems that her parents have formed a bond with their beautiful grand-daughter, Mary Cheng.

If you share an interest in Anna’s story or would like to know more, please let us know in the comments.

Thank you to everyone who helped with this post and the background research especially, Camilla Brautaset, John Gittings from The Guardian, Jette Bonnevie, and Jocelyn Eikenburg of Speaking of China.

Several books by Eva French who attended Anna’s wedding against the wishes of others. Eva’s books are about her own experience and like Anna she was a missionary in China. Titles include: “The Story of Topsy”; and “A Desert Journal, Letters from Central Asia” that she wrote with her friends who together were affectionately known as ‘The Trio’. These can be easily purchased through amazon’s used books.