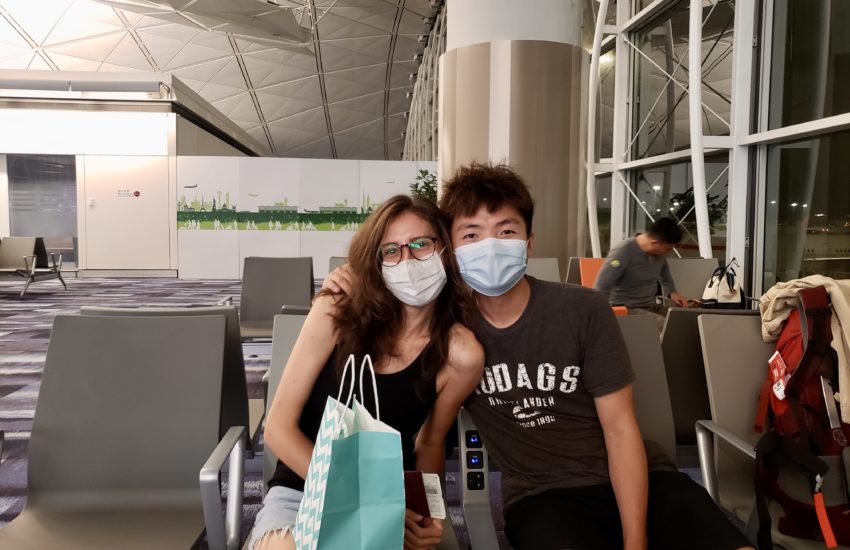 It was just an ordinary night in Shenzhen: we were hanging clothes on the small balcony of our “village” house and chatting. Our conversation drifted from one topic to another. Marriage was one of them.

We had just come back from a visit to my host family in the US, and I suspect that their encouragement to Matt to treasure me and don’t let me escape had something to do with this. In the past, he had always been hesitant, insisting that we wait until his economic conditions and career prospects developed. But on this seemingly banal night, we decided to get married.

After this conversation, we called our parents to let them know the happy news. His family was delighted and suggested we have the Chinese ceremony in February the following year, to make the most of all relatives returning home for the spring festival. And just like that, we found ourselves being four months away from our wedding date.

Little did we know of what was to come…

At the end of November, I returned to my home in Italy to deal with some visa issues and prepare the documents needed for the marriage. As we said goodbye at the airport, an ominous thought came into my head: “What if this was the last time you could hug him?” I immediately dismissed the thought as my brain’s customary overthinking. Yet, I held on to him even longer and tighter, trying to memorize the feel of his body and the scent of his skin. Matt reassured me: “You will be back in two months.”

How little did we know…

December in Italy went in the blink of an eye: I enjoyed the time with my friends and family while struggling with the nightmarish Italian bureaucracy. In January, I went to the Chinese Embassy in Rome with my dad, as he was also getting a visa to come to attend our wedding. My dad in China. How exciting! My return flight was on January 26, and I was looking forward to my first direct flight from Italy to China (Rome-Guangzhou) on my favorite airline, Qatar Airways.

News of a pulmonary infection outbreak in a wet market in Wuhan had appeared briefly on WeChat but I had given it no thought whatsoever.

Yet, on the week preceding my departure, the virus had begun spreading to other parts of China, including Shenzhen, and the news coverage appeared quite scary and unsettling. The app where I had purchased my ticket offered free refunds: the situation was serious, and people were discouraged from traveling. It was not an easy decision. I hesitated until the night before my flight. Nevertheless, after lengthy discussions with my family and boyfriend, we decided it was safer for me to remain in Italy and await until the disease had been contained. It would be just a couple more months, right?

So little did we know…

As it turns out, this was just the beginning of a pandemic that would spread all over the world and transform life as we knew it for virtually everybody on the planet.

Italy was next in line for a terrible outbreak. Despite the decision of suspending all flights to and from China, on February 17, we had our first local case. In March the entire country went into lockdown and—as the Covid-19 virus started spreading across Europe—China chose to close its borders to virtually all foreigners.

By this time, I got my Ph.D. offer from the Chinese University of Hong Kong and decided to accept it. In a few months, I would travel to Hong Kong, just across the border from Shenzhen. This thought alleviated the weight of our separation, as did having my family by my side (and getting spoiled with my dad’s delicious cooking). During this time, I also reconnected with a friend from my foreign exchange days in Wisconsin. We began working out regularly via Zoom which helped my sanity and kept the calories from my dad’s cooking at bay.

After getting a new visa, this time for Hong Kong, I flew out on July 28. I spent a night in a designated hotel and then was taken by taxi to my quarantine home for the next two weeks: a room at CUHK’s dormitory. I soon discovered that I was sharing the bathrooms with two other girls. They would become my closest friends in Hong Kong even to this day.

While these budding friendships and the breathtaking views at CUHK offered some comfort and excitement, the first few months, spent largely alone in a small, cramped, foreign space, were hard. On top of the loneliness and stress, I grew increasingly disheartened from being away from my fiancé for so long. Only 5 subway stops separated us now, but the border remained closed. On some hikes with my friends, we would point at Shenzhen, joking that I could swim to the mainland, or wave and be seen from the other side.

There were continuous flickers of hope, which were regularly crushed by reality, like when Hong Kong and Singapore announced a travel bubble only to cancel it shortly before it started. In such moments, I would reminisce about our last encounter at the airport and wonder if perhaps my premonition had been true. Would we truly never be able to meet again?

Thankfully, my worst fears did not materialize. Matt managed to secure a Schengen visa providing proof of our long-term stable relationship. We immediately planned a trip together to Italy, with him transiting via Hong Kong. The first attempt failed because his Covid-PCR test was rejected at the border. We rescheduled for a couple of days later, our reunion delayed once more.

Finally, on May 7th, 2021, we were tearfully reunited at the Hong Kong International Airport.

The feeling was surreal, to say the least. As I walked down the escalator towards him, I felt almost as if I was looking at a stranger (perhaps partly because he had dyed and curled his hair). But as soon as I was back in his arms, I felt at home again. This love was worth all the wait.

The pandemic was a huge challenge for us to overcome. Certainly, the repeated hope that it would be just a couple more months before we met helped to make it more bearable, as did the support of family and friends. Nonetheless, I am also very grateful for what we have been through. One could even go as far as to say that what happened to us was a blessing in disguise: as the old adage goes 塞翁失马 (a blessing in disguise).

To begin with, we didn’t lose any loved ones during the pandemic, which makes us far more blessed than many other people. Moreover, we learned to be more independent, picked up new hobbies, started exciting careers, made new friends, and reconnected with old ones. But most importantly, this experience has taught us to truly value each other and the time we are given to spend together, because we may never know what the future holds…

P.S. In case you are still wondering, we did end up getting married. We tied the knot on July 16th, 2021. It wasn’t a big Chinese wedding as originally planned, but we got to enjoy an intimate ceremony with a few relatives and friends. After the summer, we were forced to part ways once again. I returned to Hong Kong where the new semester was starting, while Matt remained in Naples with my family (who barely speaks any English), waiting for his Hong Kong visa. Thankfully, this time the separation only lasted a few months, and we are now living happily together in Hong Kong. 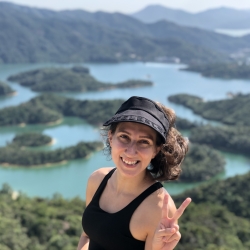 Gabriella Angelini
Gabriella is an Italian Ph.D. student at the Chinese University in Hong Kong. In 2015, she met Matt from Sichuan while traveling in Yunnan. The couple got married in 2021 after many adventures.