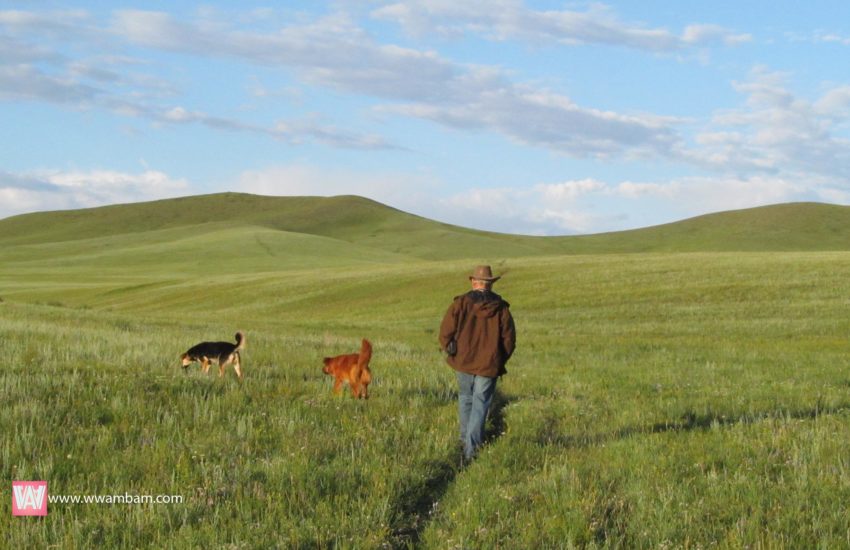 I saw dogs everywhere and anywhere on that first tourist visit to Mongolia–brown dogs, tan dogs, red dogs, black dogs. All of them large. I had no idea what breed. They all looked to be some sort of mutt. You’d see a solo one trailing across the steppe, or a pack of them moving down urban streets and alleys. My father and I were accompanied by two of them on our hike to the top of the steppe in Khustai National Park in the summer of 2014 (black dog and red dog featured in the above image). They seemed content to be “our dogs” for an hour or two. I’ve heard many times that Mongolia is a “dog culture” and that they don’t think much of cats (they consider them dirty and disgusting and/or that they can do spiritual harm to babies). Considering I was recommended to get vaccinated for rabies (specifically because of feral dogs) by my local Health Department before moving here, the dog culture association seemed to be true.

Recently my son has acquired a part-time job–he walks a colleague’s dog after school most days of the week. This dog is some sort of spaniel, her size being comparable to a cocker spaniel (see above). She’s a happy-go-lucky dog and NOT at all intimidating or ferocious. And yet, when I accompany my son when he’s walking her I’ve observed NUMEROUS Mongolians react with a visceral fear. One woman in her mid-fifties, which we encountered two days in a row, would pause and cling her body to the fence at the edge of the sidewalk, standing still and staring down at the dog until we had passed. I thought she might try to climb over the fence! On another occasion we waited for an elevator. A Mongolian woman, perhaps in her 30s, arrived but refused to ride the elevator with us and the canine. She’d wait to ride it alone. Let me be clear–this little dog (maybe 20 lbs?) is harnessed and ON A LEASH. She’s not jumping on people or running amuck. Children also generally look at her with fear and put their hands out to try and stop or block her, although the dog is restrained.

I do understand that historically Mongolians perceive dogs as only outdoor animals, as guard dogs, and not as pets in the way a Westerner would know them. You may have heard of the Bankhar Dog . These dogs have a long history across nomadic herding cultures. I’ll admit to feeling fearful upon encountering them. They are large and intimidating. But I also had a friend who had one for a while and so I experienced one up close. He was a beautiful and sweet animal–with me and with her family–but had bitten others and has gone to the countryside where he can feel more free. If I saw one of those dogs coming down the street towards me, I confess that I’d try to find a place to dodge in another direction or perhaps cross to the other side of the street.

But I can’t imagine ever being afraid of a spaniel! And certainly not a restrained spaniel. Beyond the pit bull, Doberman, Dog of Argentina, and those other “fighting dog” breeds, I am not generally afraid of dogs. And another mismatch here is that the dogs you encounter that are feral have next to NO interest in humans. If you wanted to throw them a bone, they’d take it, but otherwise they are busy with their own lives of survival and scavenging.

As always, I know I impose my Western upbringing and values onto the culture in which I am currently making my life. I like the perspective it offers. A flip-side to these observations is that I have witnessed many more dog fights and dogs messing with people in America which is a leash-culture and does far more to control the feral populations. Here the dogs are many and run wild, and I rarely hear or see a dogfight. I know it doesn’t mean they don’t happen, but it is interesting to note. I think the dogs here are more acclimated to being around others of their species.