Some people were born to tell stories, and you can count Felicity Miller (one of our contributors to WWAM BAM) among them. If you’ve ever spent any time around this Scotland native who married a Chinese man from Gansu, you’ll find yourself fascinated with her tales — whether it’s a harrowing story of a family in China wracked by domestic violence or a touching post on a Chinese great-grandfather’s amazing adventures in the UK during his first-ever trip outside of China. (It’s hard to believe that WWAM BAM is Felicity’s first-ever foray into blogging!) So it was only a matter of time before we were all longing to know the story behind Felicity, hence crowning her our WWAM of the Month.

We’re so glad to have you on the WWAM BAM team! How did you learn about WWAM BAM and come to join us as a blogger?

As I left China the year WeChat was launched I didn’t discover it until just recently. Last Autumn I wanted to try and help my husband’s aunt and uncle sell some of the apples from their orchard in Jingning (Gansu). Through a yahoo search I found the group manager of a Beijing Family Group and joined. I managed to sell a few boxes to their members. Then someone in that group posted a link to one of your articles and I liked your style of writing so I subscribed. After you posted a comment asking for contributions to WWAM BAM I immediately emailed and Facebooked the site.

How did you come to China? 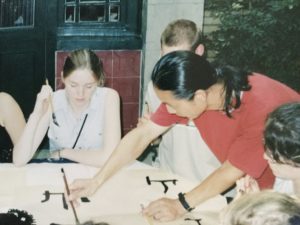 As mentioned in the group post about first attractions, I commented on a serial knotted thread that linked me to China and my husband. The simple twists of fate that brought me to China:

(In short: too much familiarity, the smell of toast, a guest speaker, a touch of guilt, an infectious smile, met a deadline, the fear of failure, a hard fought debate, a lost painting quest)

I went to an all girls school but before university wanted to go to a mixed school for my final year so I went to look at two mixed boarding schools. I was planning on choosing my father’s old school but the other school’s dormitories were making toast during my visit and it smelt of home so I chose the school that smelt of toast!

During my exam preparation, the head of a gap year charity came to visit my new school and gave a talk on their opportunities. There was no way I had any interest in taking a year out but I felt sorry for they guy because no one was listening. On my way out I took a leaflet to make him feel it wasn’t a completely wasted visit.

I almost threw out the leaflet but as it was heading for the bin I noticed the smile of the cover girl and something in that smile made me open the leaflet.

I sent off for the full brochure. There were many countries to choose from and I put red pen through the countries that I had absolutely zero interest in. China got the red pen treatment.

I just made it onto the final selection course of that year. I wanted to go to work in an African orphanage with HIV babies but my high grades made my selector doubt I’d find it stimulating enough to stay the year. I was worried I wouldn’t get selected and because he was the China desk officer, I lied and told him I thought China was an amazing country. On the final day, I reluctantly put China down as my number 1 choice.

There was a debate between the China and Africa Desk officers both wanting me on their teams. However, the China desk officer won as he was short of a candidate.

I received a letter stating that I had been selected and my project was to be in Guangdong. My mum immediately bought me books and tapes on Cantonese for beginners.

I later received another letter stating the Cantonese projects were closing as they were deemed to be too modern now so we were being posted out to Gansu. My mum went on a second book shop trip for Mandarin packs. Actually I later discovered it was because the China Desk officer wanted an excuse to go back and find a painting he regretted not buying in Gansu.

How did you meet your husband? 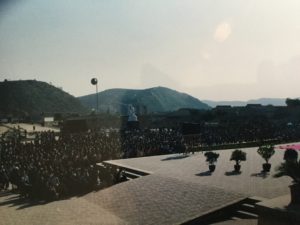 I met my husband in about April 2003 over half way through my gap year placement. The important part of our story is that my husband was 20 and I was 19. Important because I was his high school teacher and he was in his second last year of school.

After the first term of my gap year, my fellow TEFOL teacher left and I was left alone in a three bed flat. So with the permission of the school, I chose two female boarders to move in. We became great friends and it was one of their friends in our close-knit group who said to my husband, “去老外家耍走”： let’s go hang out at the foreigner’s place.” He was one of my students who sat ambiguously at the back. He’d even once plucked a hair from my head and stuck it inside his notebook. I totally didn’t notice but I noticed him the day he visited, as soon as I opened the door. I knew nothing about him apart from that fate had brought us together.

We never dated, he proposed and I said yes.

What attracted you to your husband? 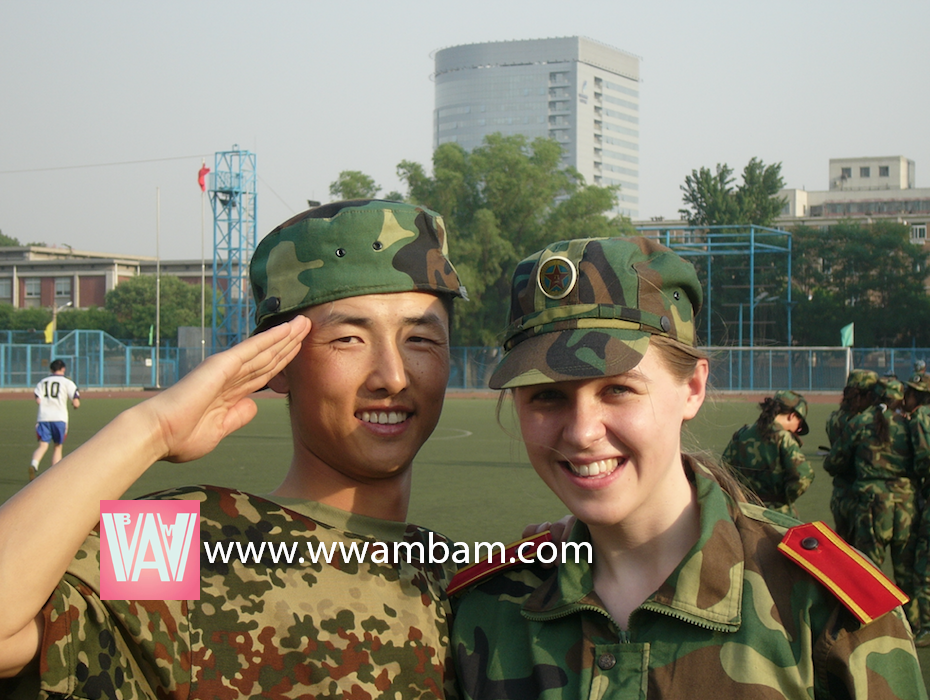 I had a love at first sight experience with my husband. It’s therefore difficult to pinpoint the attraction. Even the sound of his name gave me goosebumps, had I heard it before? It was a strange “small world” kind of feeling. I spent the next month getting to know him, undecided on whether or not to follow my heart, but by now there was more than that initial sixth sense attraction. The mysterious nature of his mono-eyelids that half concealed his dark eyes, and how they lightened up when he spoke (even though I could barely understand what he was saying). His tanned, sculpted arms from playing basketball in-between lengthy study periods. How he noticed when I was left out, making an effort to include me. 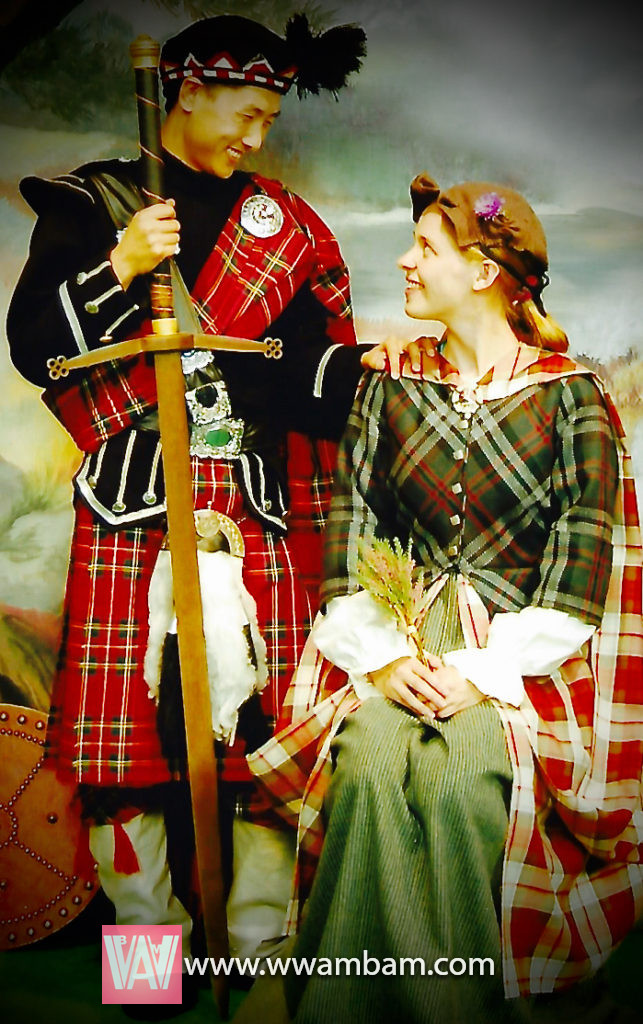 The two of you now reside in Scotland in the UK. What was it like moving with him back to the UK?

He had visited the UK once before and loved it, but this time it was a permanent move and one we weren’t prepared for. It was December 2011. The dynamic of our relationship had also been turned completely upside down before we even arrived in the UK. I was ill and we had no other choice but to go home. We slept on the floor of my parents basement with a curtain between us and the kitchen. We had also deserted my mother-in-law back in China as her £2,000 visa had been denied.

It then hit him how if he had just learnt one English word per day during our relationship, by now he’d have a bank of over 2,500 new words to work with. My parents wouldn’t allow him to work in a Chinese take away or Chinese supermarket for fear he would get stuck. He has a degree in Hydrogeology. It took him a year to find his first job after lots of rejections, even from Tesco (they were worried he couldn’t help a lost customer find a tortilla wrap). It was frustrating for everyone, knowing his ability and worth ethic but waiting for someone to discover it. Finally he found his first job as a mail sorter and machine operator in the Royal Mail warehouse.

What do you hope to accomplish through blogging?

This is my first ever blogging experience. I found WWAM BAM at the perfect time. It was during the early sessions of my PTSD treatment and it is helping me find a voice. I can’t forget the reason behind my PTSD but now that I have completed the treatment it is up to me to persevere and continue in the right direction. I thank you for leading me to the site. It’s really therapeutic.

What do I hope to accomplish? I’d like to practise my writing and build my voice. There are some topics very close to my heart that I want to address. To make an impact, I need a strong voice.

You’ve written about some very serious topics for our blog, including your experience with domestic violence in China through your husband’s family. How did it feel putting that into words?

The post about domestic violence was taken from something I wrote several years ago. It was never published until I posted it on WWAM BAM. I wrote it soon after I was told about that terrifying experience. I heard many stories but writing them down was an outlet for me instead of having them setting up camp in my brain. It kept them outside, stored inside a hard drive instead of my heart. There is only so much I can internalise.

Part of my PTSD therapy is remembering the good as well as the bad. My future posts won’t all be about the negative aspects but also about the positive. There will be more domestic violence stories to come along with other difficult topics, but also romance, love, and hope.

On a lighter note, one of my favorite posts you’ve done is about your kids’ Chinese great grandfather, including a video showing some of the adventures he enjoyed while visiting you in the UK. Could you share with us some of your best memories or moments from his trip? 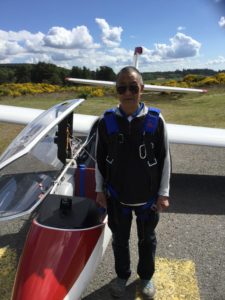 One of the best moments when my grandfather-in-law returned back safely to China. It’s a big responsibility to have elderly relatives to stay who are not your direct inherent duty. If anything happened to him while he was with us, his sons would hold me personably at fault. The night he flew back, everyone else was asleep but I was sat by the phone desperately calling around to find out if he had made his connection flights.

The funny thing was, when he arrived at Xi’an airport he didn’t go straight back home. Jet lag would not stand in this 80-year-old’s way and prevent him from seizing the opportunity to visit the terracotta warriors.

Another one of my favourite moments was watching him grow some fat from my cooking, and seeing the joy in his eyes when speaking about his gliding experience and tree top adventures. I hope he can return again. There is so much more he wanted to do and I’d love to help him tick off more boxes. He wanted to sit in a session at parliament. He wanted to go to a large amusement park, Alton Towers, because in Shanghai he was banned from the big rides due to his age.

He’s not a burden, he’s a delight to have. He’ll eat anything, sleep in a bunk bed, take part in any activity I throw at him including wearing a kilt…although that did take a little more persuasion.

A big thanks to Felicity for this interview! You can read more of Felicity Miller’s fascinating stories here at WWAM BAM.