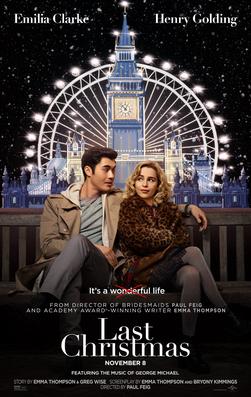 With the summer heat roasting us alive, I figured this would be the most appropriate time to review Last Christmas. Christmas movie in August? Makes perfect sense. Well to Aussies anyway ;).

Just to get you caught up – we did a preview of this film already (yes, it only took me three years to watch and write about this flick – what was I doing with my life?!). But be aware it links to fan theories that turned out to be spot-on spoilers – so proceed with caution!

So, let’s get to it. A movie that features both the Queen of British Comedy, who becomes only more glorious with every passing year, Emma Thompson and the surprisingly and increasingly versatile Michelle Yeoh (seriously, she’s in pretty much every movie or series I watch these days from Star Trek to Shang-Chi, and now even the Minions!). Anyway, where was I going with this endless sentence? Oh yes, two top-notch actors whom I adore in one movie. And of course, the Mother of Dragons Emilia Clarke and undeniable eye candy Henry Golding of Crazy Rich Asians fame.

I admit to experiencing a considerable amount of scepticism at the casting. Michelle Yeoh, who rose to fame with her Hong Kong Kung Fu action flicks and Emilia Clarke from the slaughter fest that was Game of Thrones did not really strike me as the obvious choices for what looked like a romantic comedy. But they did so well! It was especially strange seeing kick-ass Michelle Yeoh making googly eyes. Turns out, she is truly adorable.

So, how did Last Christmas do?

First, I’d like to share a moment that perfectly illustrates the Corona trauma in our lives. In a scene, where Emilia gets on a bus I screamed in panic at the screen: “Where is her face mask?!!” Took me a moment to realise this movie is from a time before Corona, the glory days of mask-less public transport.

Second on my list of random observations – Henry and Emilia have an ice-skating date in a London rink that is stupendously beautiful. Anyone know where it is? Tell us in the comments. I need to go there right now (and by that I mean in December).

Thirdly, loving the diversity. None of the main characters in this movie set in London are the usually painfully over-represented white Brits. Emma and Emilia portray immigrants from former Yugoslavia, and as we know, Michelle Yeoh and Henry Golding are Asian. Henry’s delicious British accent though…sorry, perving again. Onwards, my friends.

Fourth, I would like to give a standing ovation to the age-appropriate dating going on in this movie. Michelle Yeoh and her German prince are fairly close in age (although she of course still looks like a 40-year-old goddess, she in fact turned 60 a mere two weeks ago – can you believe it???). It is so refreshing to see an older woman dating, as that is usually a topic avoided like the plague in media representation. Total side note, if you are looking for more stories of mature women kicking-ass, I recommend Emma Thompson in Late Night.

Fifth, from a mental health perspective it struck me that I have never seen PTSD and trauma talked about in the context of health issues rather than men returning from a war. So, that was also some important representation there.

Sixth, did you know Brexit is a total topic in this movie? I know! Not what you expect from a mushy Christmas romcom. But it is done with such aplomb.

Seventh, the George Michael soundtrack alone makes this movie worth watching. Such fun!

Although the twist wasn’t entirely to my liking in a way that I can’t explain without revealing the ending, it still hit home.

In the end, I found Last Christmas to be a really lovely Christmas movie that has made it onto my must-watch list for the cold season. Well, and for the hot one for that matter.