In preparation for tomorrow’s Mid-Autumn Festival, I have been trying out some youtube recipes for mooncakes. Starting off with a traditional contender I baked mooncakes with a homemade red bean paste filling. For the pattern I used a mould bought from Amazon.

The red bean paste was quite easy to make (I used Aduki beans) as long as you don’t mind standing over the stove for what seems like an hour stirring until it thickens. I first tried the recipe from the popular youtube channel ‘Magic Ingredients’ but found it to be a little dry so I do recommend also taking a look at another cook where you will see how it bubbles as if you are making fudge. I returned my ready made paste back to the wok, gradually added some water, more golden syrup and sugar and stirred for another hour until the paste had the texture I was after. 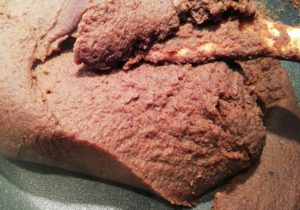 For the mooncake skin I followed the recipe from Magic Ingredients purely because I have successfully reproduced several of her fabulous recipes. I didn’t make her inverted sugar syrup and opted instead for the easier golden syrup substitute. In the UK it’s not very easy to come by the ‘cake flour’ she uses. Cake flour isn’t the same as plain flour or all purpose flour. It can easily be found in America and China but in the UK I had to use a substitute (well sieved 100g plain flour :14g corn flour starch). The lye water you can find in a Chinese supermarket or again you can make a substitute.  Below you can see a photo from my first batch.

For my second batch I wanted to challenge myself a bit further and asked some friends for non-traditional filling suggestions. Pumpkin Pie was the suggestion I thought had a good chance of working. I made the filling with homemade pumpkin puree consisting of one sugar pumpkin and one butternut squash. Using half of my puree, I added 1 tin of condensed milk, a pinch of salt, a couple of tablespoons of sunflower cooking oil, a tablespoon of golden syrup, a little ground ginger and cinnamon spices (I didn’t have nutmeg), and finally some crunchy almond butter (optional). I then proceeded to boil and bubble until it had reduced into a paste. I removed from the heat when it started to fold clean from the pan bottom.

However I soon felt that it was still too much like a thick puree and not like a mooncake paste filling so I returned it to the pan and continued stirring on a low heat. After about fifteen minutes the colour darkened and the texture felt better. Below you can see the change in colour and texture.

I tried out a few ideas of surprises for the center of the filling such as a mini marshmallow, or a malteser chocolate. The marshmallow once cooked disappeared without a trace only leaving a hole in the centre of the mooncake! The malteser changed into a chocolate covered cheerio under the heat in the oven.

I have been told that mooncakes are best after 2 days as the oil will gradually soften the skin and the surface will darken. However, a mooncake fresh and hot just out of the oven in my opinion is the best mooncake you’ll ever taste unless of course it’s made of ice-cream.

What filling ideas would you suggest?