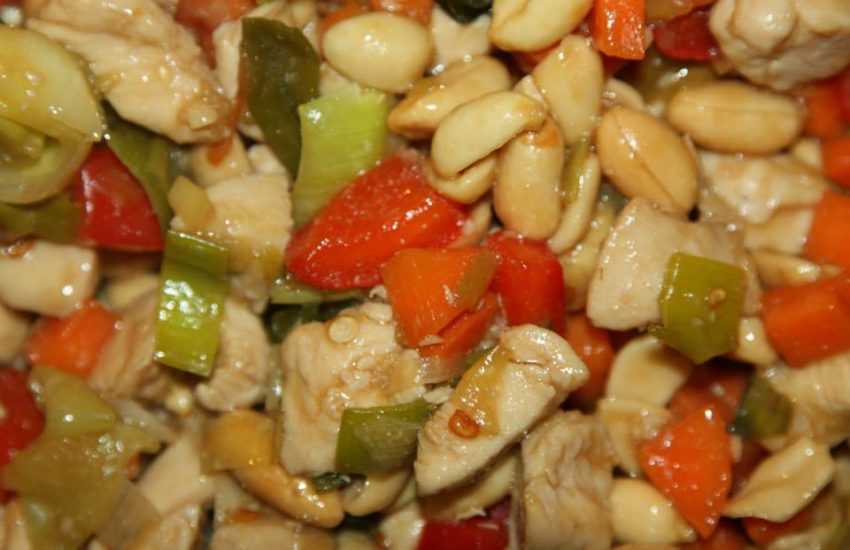 Ah, kitchen hygiene. It’s one thing to worry about it while traveling. But what about those of us who worry about the food prepared by our in-laws or friends?

If I go to a friend’s house I just keep my fingers crossed, and for one particular friend I used to take an Imodium tablet prior to the visit. However, I couldn’t do the same with my Chinese in-laws and I decided to teach them my kitchen hygiene standards.

Five trillion bacteria. That’s how much bacteria lives on that ma bu in the kitchen when there isn’t a proper cleaning or sterilising process in place. It’s often just rinsed out with water and then used to clean chopping surfaces and tables. Then it’s rinsed out again. When I see a ma bu cloth, I just see a pile of germs waiting to wreak havoc inside my stomach.

With use of Chinese videos or written articles it is possible to get the family to understand the importance of ma bu hygiene. For example:

Will your in-laws be upset about your interference in their kitchen or your kitchen? Quite possibly yes. It really depends how you or your partner discuss the topic with them. My mother-in-law (mama) lived with me before my partner joined us. An unusual arrangement perhaps, but I was studying in Beijing and my partner was still finishing high school several hundred miles away. Mama definitely didn’t like the initial constant reminders. Even when I wasn’t standing at the doorway she felt I was looking over her shoulder. I just tried to explain that if she didn’t like my reminders then she’d just have to remember. Even though it did cause some friction between us, we still love each other and it wasn’t long before the stomach trouble disappeared. In my opinion, it was a fight worth fighting. Both of my sisters-in-law also followed the new hygiene rules with a little pressure from me and now keep them up in their own kitchens.

Meat preparation is a tricky topic but one that can be addressed. I insisted on at least a meat side and a veg side on the chopping board or, even better, separate chopping boards. Sometimes mama would forget and again it just took some reminding. I wrote on the boards and their sides what they could be used for to help her remember. Sometimes it is safer to not wash meat, especially chicken, as tiny particles of bacteria could splash onto other surfaces instead of just inside the sink. It was difficult for mama to understand this chicken rule. In her mind, my hygiene standards were at fault.

Hand washing. Let me tell you a true story.

We had a friend who came to visit and she insisted on cooking a meal for us in our kitchen. As it was my kitchen, I felt it wouldn’t be too rude for me to explain that I was annoyingly strict about kitchen hygiene and I hoped she wouldn’t be offended if I introduced her to my simple rules. “Wash your hands with soap every time after you have come into any form of contact with meat or fish. This includes the meat, the used meat chopping board, the marinating dish if there is one, and any meat packaging.” She was a young, degree-educated lady and I was feeling confident she understood. However, I sat in the kitchen and decided to do some work so I could observe her.

With her bare hands, she descaled and gutted a fish. Some of the guts were still dangling from her fingers as she opened a drawer, dropped some guts in the drawer and proceeded to tear off a plastic bag before returning the remaining bags back inside the drawer. Horrified, I spoke up and explained as politely as possible that before she opened the drawer she hadn’t washed her hands. In disagreement she argued that she had clearly washed them. I asked her when. And this was her reply: “I washed them at the start before I did anything”. She had assumed that all she had to do was wash her hands once right at the beginning of the food preparation process.

Another case of hand washing horrors happened in a well-known supermarket in China. The shop assistant helped a customer get some raw meat from the counter before she went to put the grapes out on display. In between her tasks she didn’t wash her hands.

My mother-in-law used to rinse her hands under warm water before drying them on the ma bu cloth. Introducing her to hand soap in the kitchen in between meat preparation was essential.

While teaching your in-laws about kitchen hygiene they are very likely to bring up areas of your hygiene that they find equally frustrating. One example is putting socks and underwear through the same wash. My mother-in-law believes that the bacteria in the socks will contaminate the underwear and then give you health problems. If washed on a hot wash I don’t understand this logic. If it were really true, my sock wash would have already contaminated the washing machine and I would need to purchase a separate washing machine for underwear. However, I believe in compromise and if separating the washes in more ways other than colour is important to mama then she can win that argument as long as her compromise is kitchen hygiene.

I no longer hover over mama’s shoulder and she often jokes that her kitchen standards are now higher than mine. And you know what? She might be right.