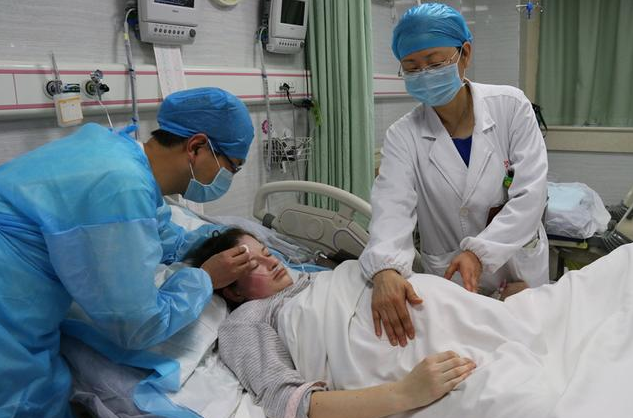 Chinese media and their passion to report on WWAMs and their offspring is always a treasure trove and mostly the motor fuelling our WWAM Spotter section. However, while most articles tend to be of the copy-paste variety, the story of 30-year old Annie from New Zealand and her Hubei husband Mr Hu has been subjected to quite some editing and variation as it spread across different Chinese-language media in early January.

Annie and “her husband Mr Hu”, as he is referred to by the media outlets reporting the story, actually spent almost a decade in a long-distance relationship, with him living in China and her being based in New Zealand. They finally tied the knot on the 8th of January 2016, and almost a year to the day later they welcomed Baby Hu, the new addition to their family.

When two people from different countries find each other, long-distance relationships can become very common. However, sustaining such a relationship over nine years and across such a long distance is indeed remarkable, which is why I was surprised the media gave this point so little attention. I just would have loved to ask them how on earth they did it!

Chinese Media Coverage of the Birth

Many major Chinese outlets, such as Phoenix, Tencent Hubei and Netease, did pick up on the story, each of them presenting a unique spin on it. So let’s take a look what Chinese media had to say about Annie and Hu.

Phoenix went with a piece posted in the Wuhan Evening Post, original title “The Culmination of 9 Years Long-Distance Relationship”, but was renamed to “Hospital helps foreign wife with custom-labour plan”. The article seemed highly edited and was fairly focused on a detailed and sober description of the entire process from courtship, to birthing preparation and the decision of whether or not Mr Hu should be present for the birth to avoid miscommunication.  The baby’s exact time of birth, it’s weight and the duration of labour are all included in the final paragraph. The only time the editors retained some of the original reporter’s evaluating remarks was the observation that Annie was already walking about with bare feet hours after giving birth, rather than observing the Chinese tradition of “sitting the month”. The horror at this vision was almost tangible in the reporter’s words.

The article posted on Tencent Hubei (while there was no indication whether it’s a repost, the reporters quoted at the end are the same as in the Wuhan Evening Post) put the focus on Annie’s devotion to her husband, describing how she had learnt Chinese in order to come to China and live with her husband, in a much more emotive manner, opening the article with a quote from her saying:

“I know that in Chinese there is a saying: ‘If you marry a chicken, follow the chicken, if you marry a dog, follow the dog.’ Wuhan is great, in 3 days it’s our first wedding anniversary. I am so happy to be a Wuhan wife and have a child in Wuhan”. The report further stressed how Annie initially wanted to return home to New Zealand for the birth but since her husband was unable to leave China due to work, she decided to stay with him instead. The story then went on to very vividly recount the birth; including quotes from all involved which makes one wonder how much of it is accurate and how much is fiction. It doesn’t seem very likely the reporter would have been present throughout the entire event in question.

Netease sourced their story from the Chutian Metropolis Daily, another one of Hubei province’s newspapers, which stressed the fact that it had almost been a breach birth, devoting the final paragraph of the story to this phenomenon.  The article headline was “Foreign Wife Successfully Gives Birth to Mixed Baby”, a title one suspects, would create a Twitter shit storm anywhere in the West, but back in China things are just a little bit different. This was the only piece that didn’t make any mention of Annie’s “failure” to observe the “sitting the month” tradition.

And there you have it, a story of an international couple, whom it took 9 years to finally be together and the three very different ways leading Chinese media outlets reworked the report. Congratulations to Annie and “the husband Mr Hu”, as he shall henceforth be known. We wish your little family all the best of luck and a happy future.