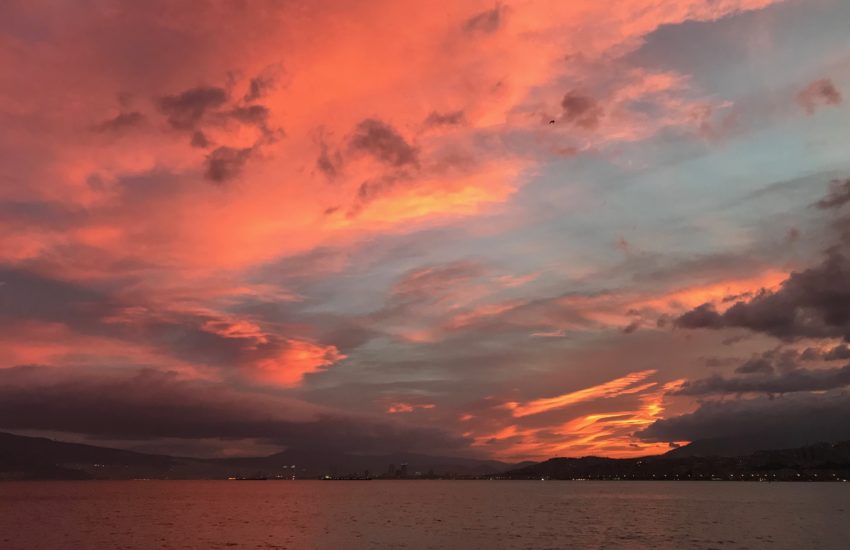 Here in Turkey, where I live, we are currently subject to weeknight curfews and weekend lockdowns. They began at the start of December and are ongoing until the government is happy with the downturn of COVID cases. This means I spent Christmas and New Years weekends home alone with my cat. I wasn’t much in the festive mood this year and didn’t bother to put up any of my decorations.

My family coordinated a Zoom call for the day after Christmas. We connected from three countries (UAE, Turkey, and USA) and across five different time zones. It was great to see everyone’s faces, hear their voices, and to share about our holiday, upcoming NYE plans, and hopes for 2021. As the weekend lockdown wrapped up at 5 AM on Monday, January 4th, I went seaside for a sunrise walk. I reflected on the call and realized that not a single one of us had mentioned anything religious. No one went to church. No one commented on the birth of Jesus.

I’ve come to recognize that my family, at least my nuclear family, is culturally Christian, but not religiously so. I know my mother says nighttime prayers (thanks, Mom!). We went to church as children; I was confirmed in the Methodist church at the age of 13. But over the years and changes of location for education, work, and relationships, we have scattered to the wind and none of us–not my parents, my three siblings, or I–participate in any form of organized religion. A few might consider themselves spiritual, others not at all so.

Beginning in 2015, I spent three years living in Mongolia which, according to modern estimates, is 50-60%  Buddhist  (Robinson 128). The Mongolian family I married into didn’t teach me about Buddhism, and I didn’t observe them practicing regularly. However, my then-husband would, from time to time, go to Gandan Monastery located in downtown Ulaanbaatar. When finances stressed him (often) or he or other family members had physical ailments, he’d go to “have his books read” and follow any directives given by the monk. For example, he was told to wear a small piece of copper on a string around his neck for a month–for what, I can’t recall. For him and his immediate family, the little bit of Buddhism that seeped into their lives felt cultural, and not religious. Elements of traditional Shamanism were also culturally present.

This is my third year living in Turkey, a secular and Muslim nation. Once again I am surrounded by colleagues and friends that I would classify as culturally Muslim, and not religiously so. The Turks in my circle of friends and acquaintances don’t visit the mosque to pray, don’t wear religious coverings, and don’t reference faith or religion beyond the common “Inshallah” (God willing) offered when discussing future plans. There are two bayrams (religious holidays)–Ramazan and the Sacrificial Feast–that mandate days off from work. My Turkish friends gather with family over beautiful meals and spend quality time together. Not unlike time off in the U.S. for Christmas and Easter–in modern times renamed to winter and spring break–and usually spent with families gathering over tasty food.

I’ve lived in three different religious landscapes over the past decade–Christian, Buddhist, Muslim. I say all of this to point out a similarity across the globe that while there are many people that follow and practice a religion, there are also many of us that find ourselves in the culturally-something category, and not the religious one.

That said, a question occurred to me recently–do all Turks assume I’m a Christian because I’m American? Until living in Turkey which is identified as a Muslim country, I had never paused to think what outsiders might think America is or is not. While I know or believe America to be a melting pot of diversity, we are generally perceived as a nation founded on Christian values. Therefore, I’ve begun to ask Turkish friends that question–do you assume Americans are Christians? The answer is usually “yes.” Just as Americans assume Turk=Muslim, here they assume  American=Christian.

It’s been an eye-opening observation to make, looking back across my life and at more recent experiences living abroad. Nowadays I go out of my way to talk to friends and colleagues about faith, religion, and culture–those places or events in which they intersect, as well as the times and ways they do not. One of the primary reasons I choose to live abroad is because it exposes me to diversity AND causes me to think and speak carefully as I seek to know and understand those different from myself, all the while seeking our similarities and common ground.

I’ll wrap this up with a small anecdote. Recently, while watching a film with the man I’ve been dating in recent months (who self identifies as Turkish, Kurdish, Alevi, and British as he also has UK residency) there was a character on the screen that referenced his belief in God in a pivotal scene.

“Sometimes,” he said, with no hesitation.

“Good answer,” I replied, smiling and thinking I felt very much the same way.